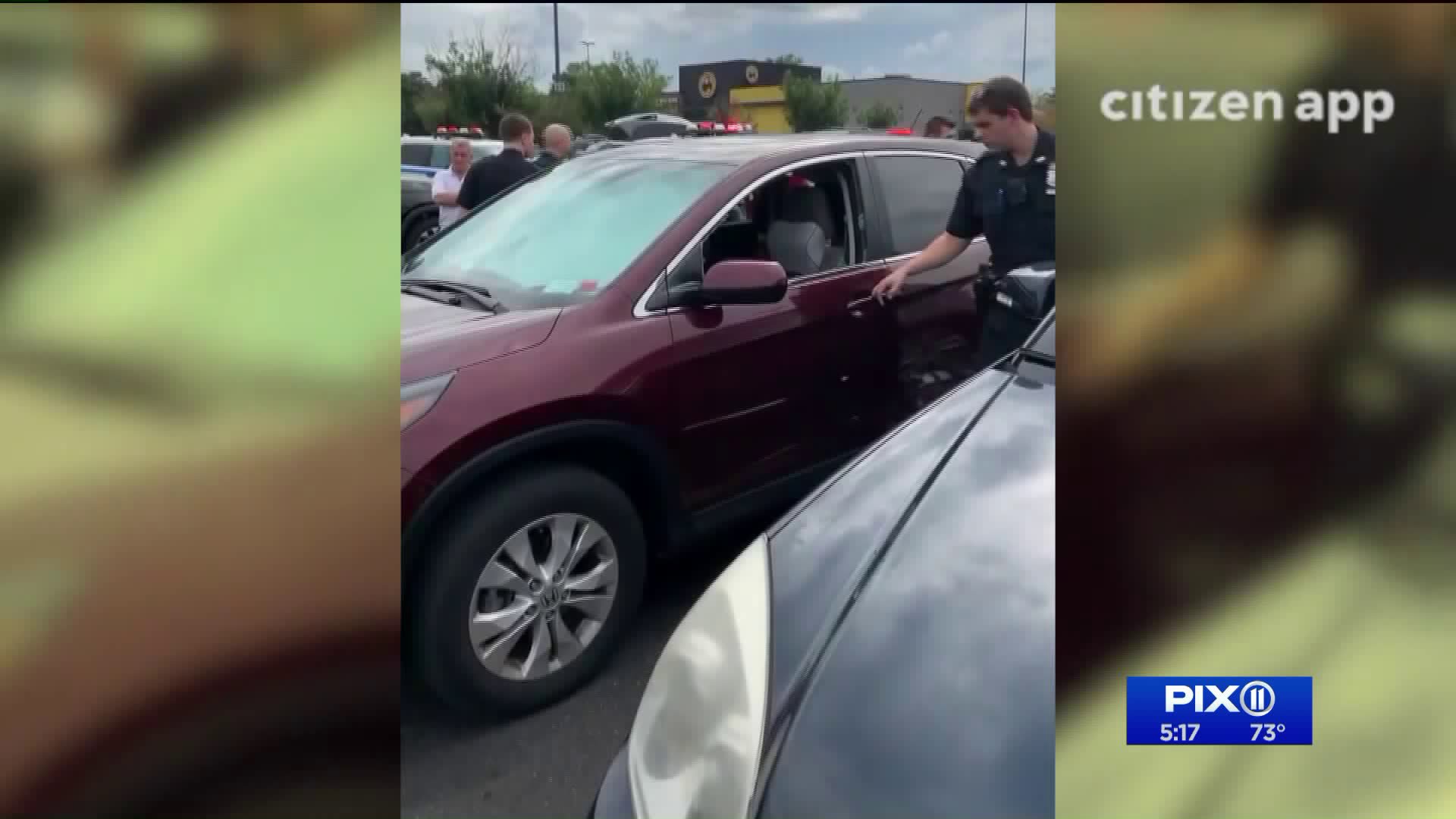 A mother was taken into custody after she allegedly left her child in a car at a Queens parking lot Friday afternoon. Magee Hickey reports from the Target parking lot where it happened and where`s it`s happened before.

COLLEGE POINT, Queens — A mother was taken into custody after she allegedly left her child in a car at a Queens parking lot Friday afternoon.

A 3-year-old boy was rescued by police after he was left in an SUV at a parking lot. (Citizen)

Police received a call about a child left in an SUV at a shopping center parking lot in the vicinity of 20th Avenue and 132nd Street in College Point around 3:45 p.m.

When they arrived, officers found the 3-year-old boy inside the vehicle, with its windows rolled up and the engine off, according to police. The outside temperature at the time was about 75 degrees.

Video from Citizen app shows police and shoppers surrounding the vehicle, which had its windows broken into in an attempt to rescue the child.

He was taken to New York-Presbyterian Queens for observation, police said.

The toddler’s mother, Mona Lisa Gomes, 32, had been shopping at a nearby Target and was arrested moments later.

Gomes faces charges of acting in a manner injurious to a child and reckless endangerment, police said.

Francis Reyes is a new father of a seven-month-old girl and this East Elmhurst resident, along with so many others shopping at this College Point Target, was horrified to hear that, according to police, the mother allegedly left her three-year-old son alone in her Honda CRV on Friday with the little boy’s jacket on and the windows rolled up.

A passerby reportedly heard the little boy crying inside the car, saying he wanted air and his mother.

The passerby then called 911. Police arrived, broke the window, removed the child and arrested the mother, 32-year-Mona Lisa Gomes, now charged with acting in a manner injurious to a child and reckless endangerment.

The 3-year-old boy was taken to a nearby hospital to be evaluated.

“She has to be more careful,” Ricky Lee, a Target shopper, told PIX11 News. “No mother intentionally doing that, no mother would want to see her child hurt or anything,” she added.

This is the same target parking lot that a five year-old boy was left by his father in a sweltering car on August 9.

In that instance a firefighter smashed the window and unlocked the door, freeing the child. And the father was arraigned on a reckless endangerment charge along with criminal possession of a controlled substance: Xanax.

“As a parent, I think we have to take care, take children with you, wherever you go,” Delia Palaguachi, a target shopper, told PIX11 News.

So far this year, more than 30 children have died in hot vehicles across the country, with six in August,alone.

Last month, in the Bronx, twin babies Luna and Phoenix Rodriguez were left in their dad’s car when he allegedly forgot about them when he went to work.

And then in Camden County, New Jersey, near Philadelphia, a two year old girl died after being left for more than seven hours in a hot car on August 16th.

“I don’t know how people can do that,” Zoltan Horvath, a Target shopper, told PIX 11 News. “It’s terrible, yes.”

The FDNY and the NYPD Are reminding everyone never leave children alone in a car on a warm day.