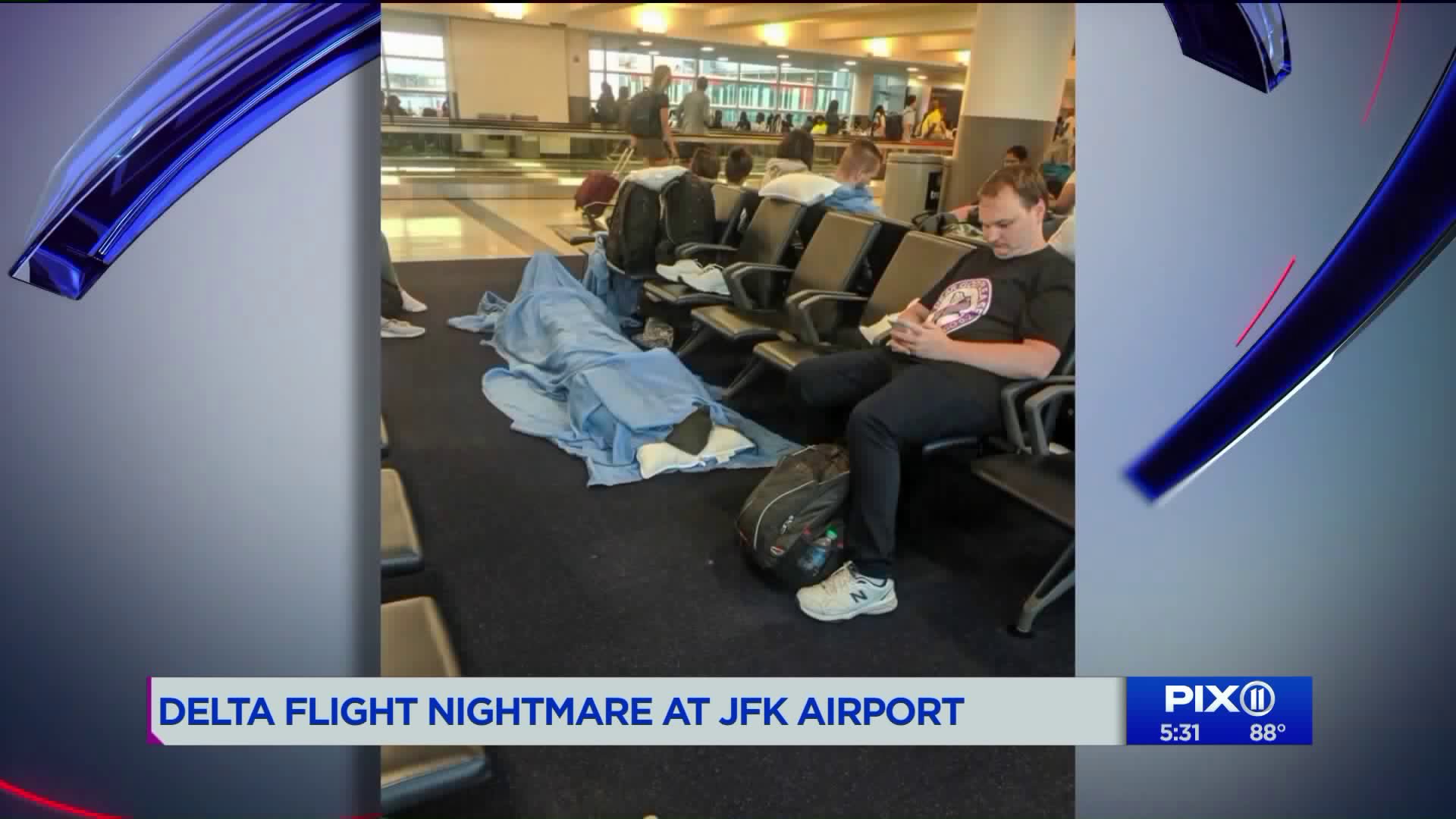 Hundreds of passengers at Kennedy Airport, including a "Dancing With the Stars" cast member, waited overnight into Thursday morning, for at least 16 hours, for a flight to Los Angeles that was originally supposed to take off Wednesday afternoon, witnesses tell PIX11.

QUEENS — Hundreds of passengers at JFK Airport, including some "Dancing With the Stars" cast members, waited from Wednesday afternoon overnight into late Thursday morning for a flight to Los Angeles, their carrier, Delta Airlines, has confirmed.

Their flight was delayed by nearly 18 hours.

Delta Flight 975 was scheduled to depart form JFK at 3:30 p.m. Wednesday, heading to Los Angeles International Airport. However, it wasn't until just before 10:00 A.M. Thursday that passengers were finally in the air.

The cross-country flight happened after passengers had been boarded, then deboarded, reboarded, and deboarded yet again, over the course of more than nine hours, according to people on the plane who spoke with PIX11 News.

"It's terrible. Absolutely terrible," said one passenger, in a cellphone video comment to her friend, Peta Murgatroyd. Murgatroyd and her traveling companions are all dancers on the prime time TV show "Dancing With The Stars."

They documented their frustrations via social media to their millions of followers.

John Goglia, a former National Transportation Safety Board member and current adjunct professor at Vaughn College of Aeronautics and Technology in Queens, said that the situation involving the flight is unprecedented.

“To have that kind of delay in a domestic, U.S. operation,
for an airline the size of Delta,” said the aerospace and aeronautics consultant, “it's very unusual, because they have other airplanes, they have additional crew members, so they have the resources to deal with operational problems and delays.”

“Delays that long usually involves cities where they only have one or two flights a day,” the former NTSB member said in an interview with PIX11 News. “That can be the rural U.S., but more likely it's outside of the U.S.”

The 3:30 P.M. Wednesday flight did not push out from the gate for the final time until 9:19 A.M. Thursday, a full 17 hours and 49 minutes late. It didn’t become airborne for another half hour.

That delay was longer than the longest non-stop flight available from JFK, to Manila, in the Philippines, on the other side of the planet.

In the same length of time that the flight was delayed, passengers could have walked from JFK to Newark Liberty Airport, and then walked to LaGuardia Airport, according to Google Maps.

"Delta apologizes to customers on flight 975 operating from New York-JFK to Los Angeles, which was delayed last night due to weather affecting Northeast airspace. Customers were offered water and snacks, pillows and blankets in the terminal before the flight departed at approximately 10am for Los Angeles Thursday morning."

The airline also said that the airport is operating with a single runway due to construction, and that that’s constraining operations.

Delta also said that it confirmed that the flight never exceeded the three-hour limit on tarmac stays enforced by the federal Dept. of Transportation in its passengers’ bill of rights.

The airline also said that it “will be offering customers a gesture of goodwill for the inconvenience.”

It did not specify what the gesture will be.