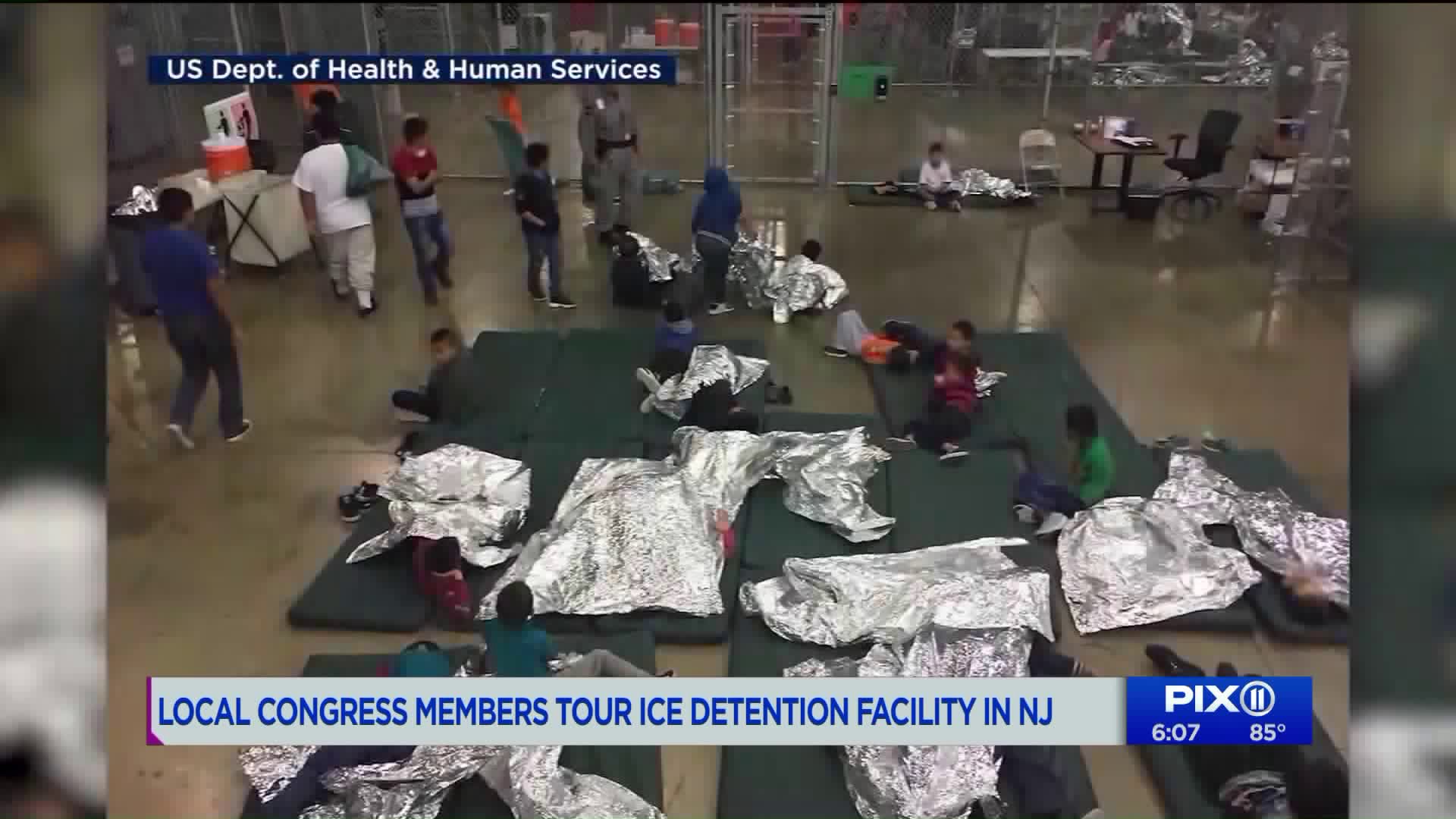 ELIZABETH, N.J. — A small delegation of members of Congress toured the detention facility that's controlled by the Immigration and Customs Enforcement agency.

The pre-scheduled visit ended up coinciding with the Trump Administration announcing a major immigration policy change which, if it passes, could see migrant children being detained in federal custody indefinitely.

Around 10:30 a.m. Wednesday, five members of the New York and New Jersey congressional delegations were at the ICE facility on Evans Street.  By prior agreement, the elected officials were not allowed to bring electrical devices with them, including cellphone cameras.

By contrast, PIX11 News was able to record video in the facility last year.

Our investigation found the city block-sized building to contain open bunk sleeping quarters, open air showers, metal tables, and a volleyball court-size recreation area with a ceiling that can partially open.  However, there was really nothing there beyond that, including virtually no windows to the outside world.

"[That's] over $700 a night per bed," said Jean Belford, a community activist who founded the group Rockaway Women for Progress.

"You could stay in Fiji for that," she continued,  "There have to be other solutions."

The Department of Homeland Security reported the bed rate for each inmate at a much lower amount, approximately $130 per day.

The Politifact website of the non-partisan Poynter Institute has estimated there cost to be moderately higher.

The costs are part of the reason why her organization and at least two other immigrants' rights groups, Make The Road, and Hand In Hand, brought a few dozen demonstrators to the site to urge the members of Congress to act on what they'd seen and heard inside.

Espaillat gave his assessment of the facility succinctly.

"If you ask me what it is," he said after the tour on which he'd spoken with a variety of detainees, "It’s a jailhouse!"

The detention center had been cited in a human rights organization report last year for serving maggot-laced food, dirty drinking water, substandard mental and medical care, and other shortcomings.

Those conditions no longer seem to be the case.  However, said Rep. Pallone, "They had time to fix the conditions" before Wednesday's pre-scheduled tour, "if there were any bad conditions."

Even with improvements to detainees' day-to-day lives, the politicians on scene and protesters alike said that that's not good enough.

"Just by having good conditions doesn't mean we are all happy," said Tatiana Bejar, an organizer at the Hand In Hand immigrants' rights group.

"Nobody's happy by having families separated or [not] knowing when your case is going to end."

The tour and accompanying demonstration took place on the same day that the White House said it will move to end the Flores Settlement.  It's a legal ruling that prohibits the government from detaining migrant children beyond 20 days.

In other words, they could end up being held indefinitely if the Flores Settlement were to be struck down.

"This president doesn't have a heart," Rep. Pallone said.  "How are you going to keep people indefinitely when this process is so long?"

The congressional delegation endorsed efforts already underway to challenge the president's directive in court.  The White House acknowledges that it may take more than a year — through the next national election — for the ruling to be overturned, if it's successful at all.

Another concern that the congress members and the demonstrators expressed was that the detention center is operated by CoreCivic, the world's largest private prison operator.

Rep. Jeffries, specifically, told PIX11 News that reducing the government's reliance on private companies to detain asylum seekers is a priority for the Democratic Party.

However, he emphasized, the situation is only able to change if voters unseat leaders who uphold the current system.

PIX11 News contacted CoreCivic for comment for this article. It responded with this statement:   CoreCivic Safety facilities like the Elizabeth Detention Center play a vital role in ensuring that ICE detainees get needed shelter, appropriate care and due process in a safe environment. To ensure compliance and accountability, ICE maintains full‐time, on site staff who monitor conditions and contractual performance. These officials have unfettered access at all times to detainees and residents, CoreCivic staff, and all areas of the facility.