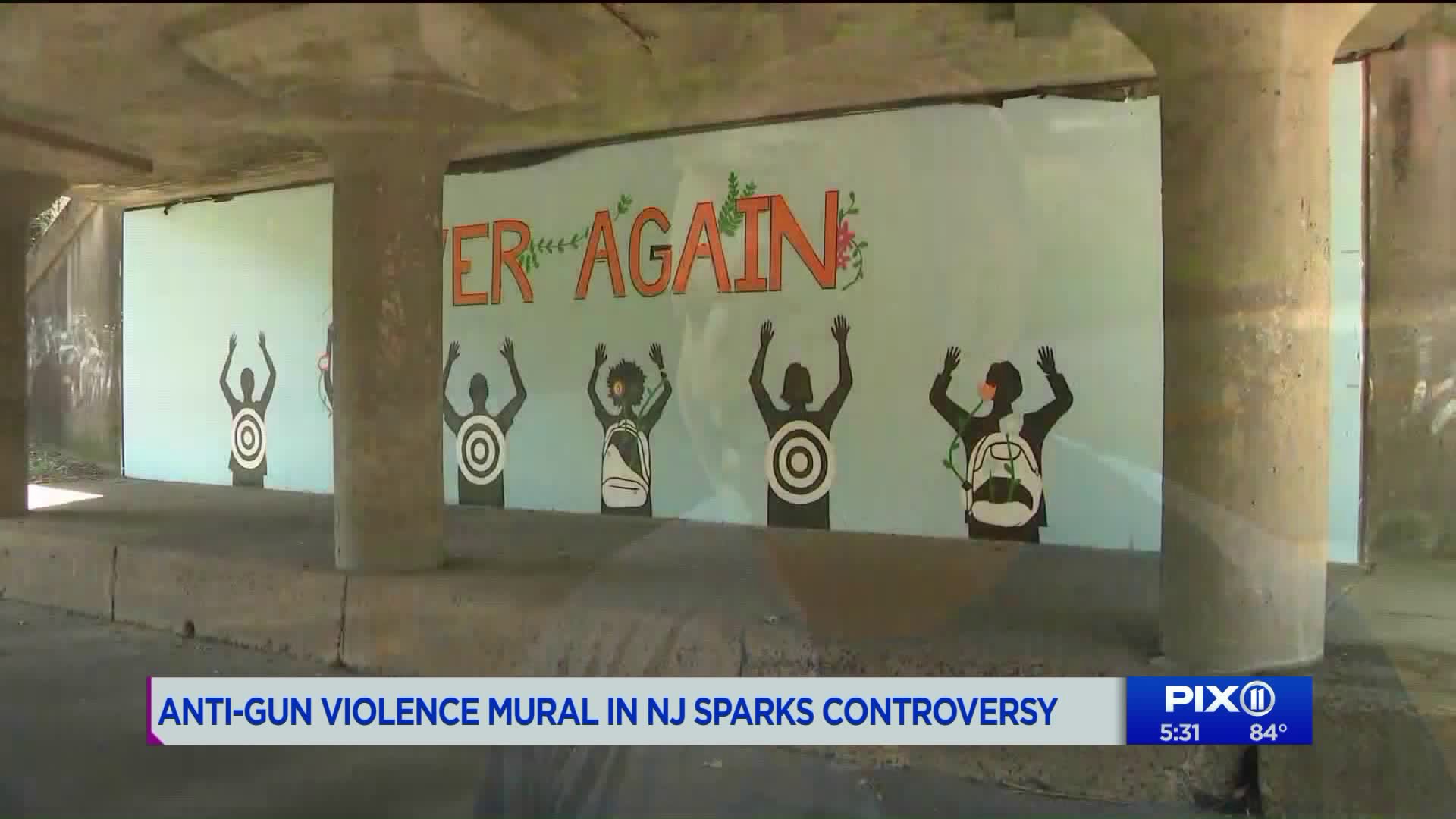 The students, who formed an organization called Art to Action, got approval from NJ Transit to paint the 50-foot wide mural. It features the term "Never Again" emblazoned in large, bright orange letters. The phrase was a tribute to students at Marjory Stoneman Douglas High School in Parkland, Florida, after an expelled student shot and killed 17 students there last year.

MONTCLAIR, NJ -- A mural expressing concern about gun violence against students is garnering some controversy in Montclair, but the students who created the artwork say that that's really the point.

The students, who formed an organization called Art to Action, got approval from NJ Transit to paint the 50-foot wide mural. It features the term "Never Again" emblazoned in large, bright orange letters. The phrase was a tribute to students at Marjory Stoneman Douglas High School in Parkland, Florida, after an expelled student shot and killed 17 students there last year.

NJ Transit owns the train trestle on which the artwork is painted.

The five Art to Action students raised funds for their mural with a GoFundMe page and they coordinated a group of two dozen volunteers to scrape, prepare and paint the artwork. It's almost complete.

"I saw them painting the other day," said John Fiore, the head football coach at Montclair High School, where the Art to Action students had attended.

All but one of them graduated last May.

"It was beautiful," Coach Fiore said about their art.

Many people who passed the mural agreed with him.

"To me, it just says stop the violence," said Joi Murphy, as she looked at the artwork with her son, Shane. "When I was a child, we didn't face gun violence," Murphy continued. "But now, we're so used to it, I think it [the message] should target everyone."

There is controversy, however.

"I know a lot of parents in Montclair," said Victoria Gallucci, as she stood in front of the mural, "who feel like their kids are going to walk by this every day, and be reminded that they are unsafe in school."

Gallucci said that she favors the mural. However, she and others pointed out, there have been comments on the Mommies and Daddies Montclair Facebook page that have criticized the work of art.

"You did have a good 20 or 30 percent of parents concerned," said Abraham Dickerson, "because there is a local park here."

However, said Julia Maskin, one of the Art to Action members, the group intended for the mural to be provocative, with its six silhouetted figures with their hands up. Three of the figures have bullseyes on them; the three others wear backpacks with flowers growing out of them.

"Art is one of the most thought-provoking forms that we have," said Maskin, "especially as students with limited access to power."

While some concern has been expressed about the artwork, every resident who spoke with PIX11 News about it said that feedback they've gotten from students has been positive.

Daniel Robert,  a parent and football coach at Montclair High, said that he'd asked his players about the art.

"One of them," Roberts told PIX11 News, "his exact quote was, 'That's good work, bro. I'd rather tell my little brother about this than go to his funeral.'"

Maskin said that that's the sort of reaction she and her fellow artists had sought, in part because it shows how gun violence affects students of many ages.

"We could use a public space where we could elevate this message," Maskin said, "in a way we probably could [not] be heard otherwise."

The mural is expected to be completed before the end of next week.