Expired and rotten food at supermarket in Chelsea 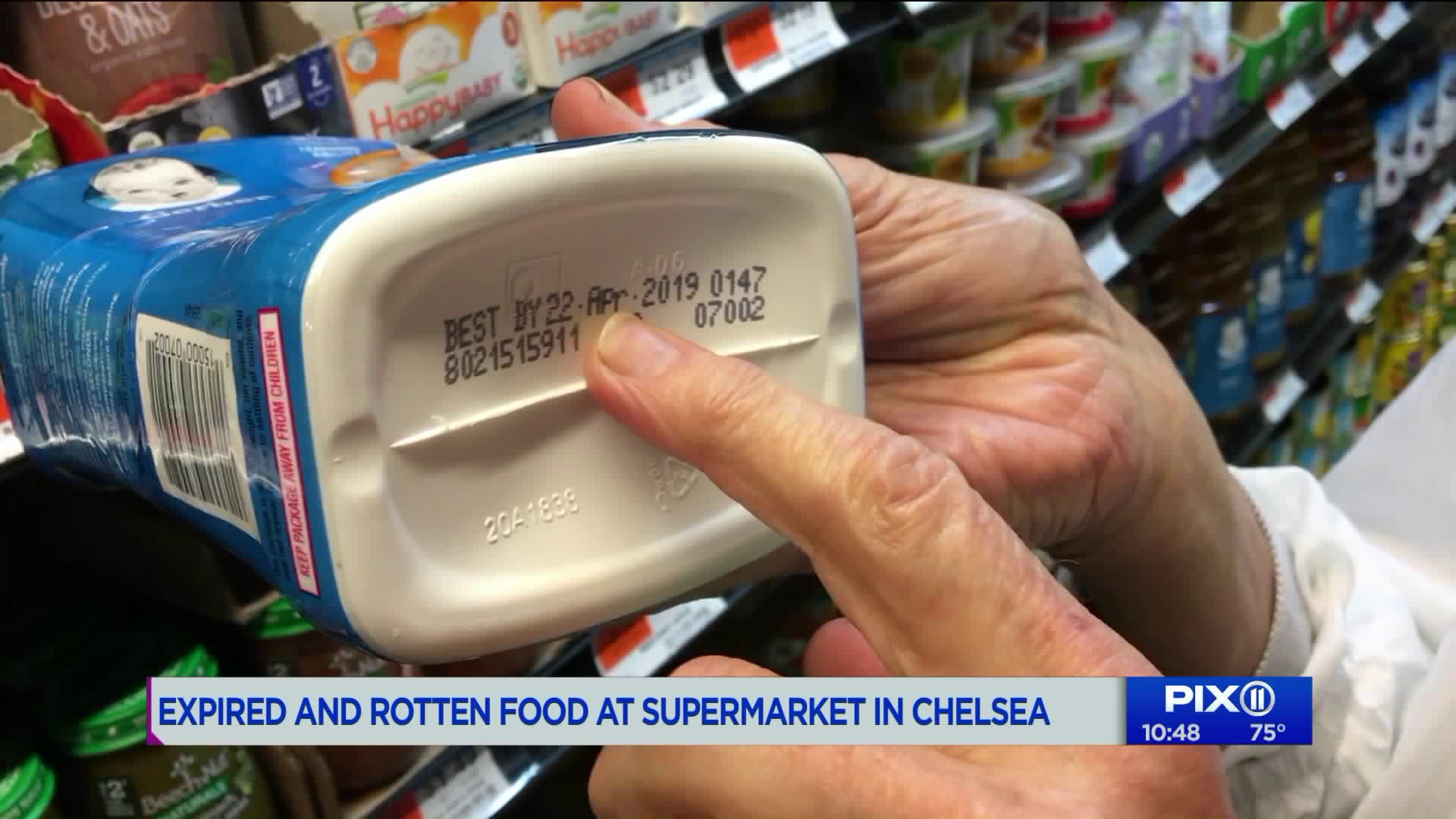 Expired food being sold at a market in Chelsea. PIX11`s Arnold Diaz investigated.

CHELSEA — I couldn’t believe it was still for sale.

I was at the Ideal Marketplace in Chelsea after receiving an email from a PIX11 Viewer.

She wrote: “There is always expired food there. I  saw a pate that was expired 5+ months with visible mold growing inside.  Today there were sausages expired 2 months ago.”  She attached a cell phone video of a package of capocollo hanging at the front of the rack she’d seen in the market.. The meat inside was covered with green mold.  After seeing that video, we went to take a look for ourselves.

We didn’t expect to find the moldy capocollo  at market on 9th Avenue between 28th and 29th streets.  After all,  it was a week  after we received the viewer’s email.

But there it was!  That moldy meat, still hanging at the front of the rack.  We can’t prove it is the same package the viewer saw, but it appeared to be.

I showed it to the store manager

“Oh wow, this is horrible!” He speculated oxygen must have gotten into what was supposed to be a sealed package, causing mold to grow.  Why hadn’t his employees spotted it and removed it?

He said the store was under new management and admitted they all need to do a better job.

Interestingly, the rotten meat was not past its Nov. 22, 2019 expiration date.  But many other products were.

In the baby food section, we discovered Gerber Baby Barley Cereal that was two months past its expiration date.  A Gerber customer service representative warned us “Do not feed that cereal to your baby."

She said the taste, texture and nutritional value diminish over time. She also said the Baby Barley Cereal was discontinued by Gerber six months ago.  That means the boxes at Ideal Marketplace are from an old lot.

A couple of months expired bad enough, but it’s nothing compared to the packages of Pesto and Ricotta Tortellini we discoverd, with an expiration date of March 28, 2017! It wasn’t just one package.

Every one of the dozen or so packages had the same two-year-old expiration date.  The store manager had no explanation and said all the expired tortellini would be removed from the pasta case immediately.

Pushing our cart past the cheese case, we found a  bag of Romano cheese with an expiration date of Dec. 2, 2018. It was seven months old. The manufacturer, Stella Cheese,  says  “We cannot guarantee the functionality and flavor of the Romano cheese after it expires.”

The Father’s Table NY Style Cheesecake looked appealing, until we saw the “best if used by” date of June 2, 2019.  Two weeks old.

The Graviera cheese was still in the case though the sell by date indicates it should have been removed 12 days ago.

The Potato and Spinach Pierogi were a week past the date on the package. What a Shame!

The viewer who tipped us off to the problems at Ideal Marketplace said in the email, “I already complained to NYS Agriculture and Markets but no results.”

The state Department of Agriculture and Markets is responsible for inspecting all Grocery stores and Supermarkets at least once a year. The inspection reports are translated into a letter grade, between C and A.  Ideal Marketplace received a B following its April, 2018 inspection, because of violations for keeping “potentially hazardous” foods at improper temperatures.

However, believe  it or not, Ideal Marketplace received an "A" following its most recent inspection in September, 2018.

Do the inspectors check for expired food or food that appears to be risky to eat?  They are required to “look for issues that could lead to food born illness”, but there is no regulation against selling expired food.

The Department says it “encourages consumers with a complaint about a retail food store or its products to contact 518-457-4492.  If you have a story for me, contact me at whatashame@pix11.com.