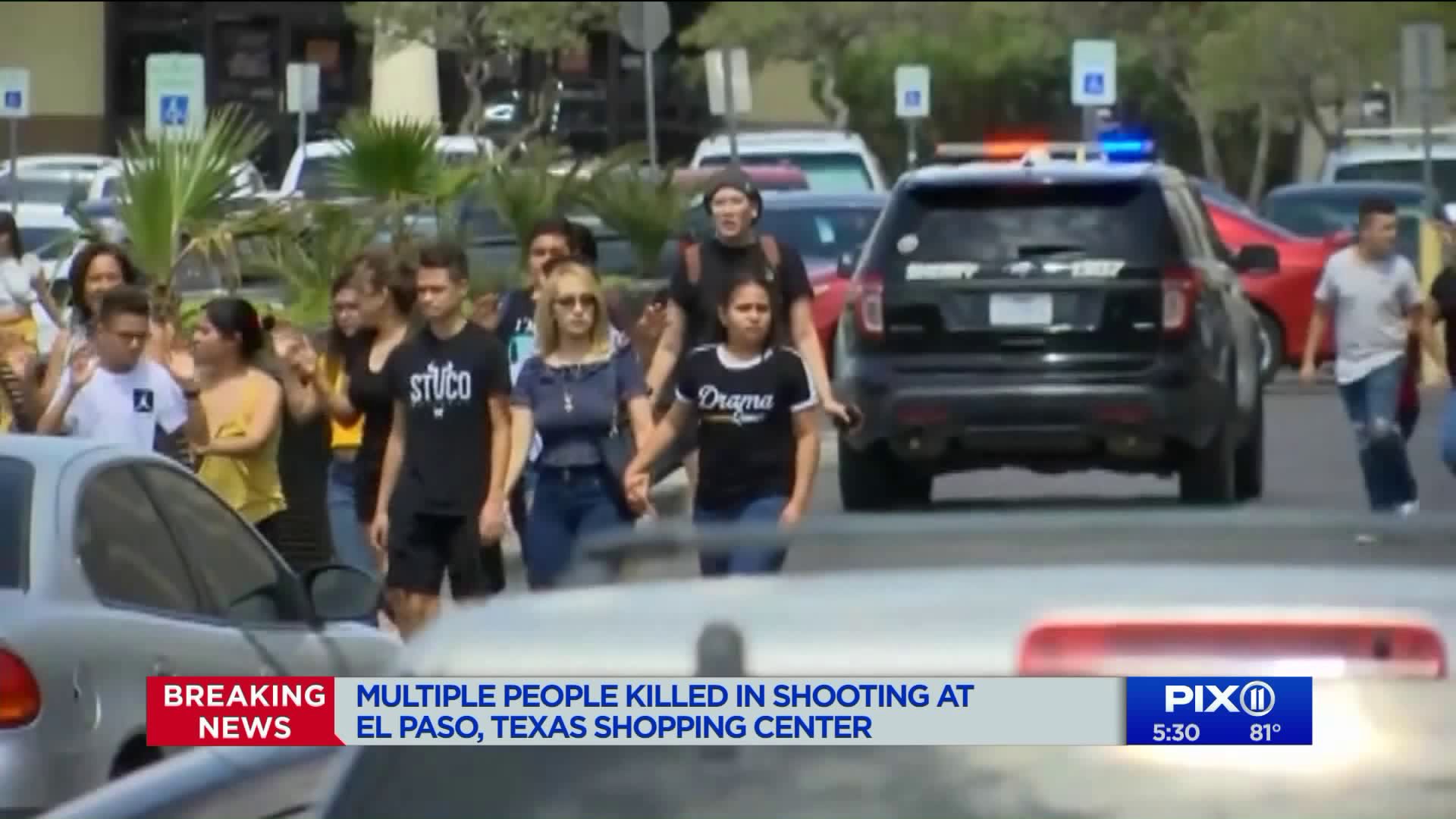 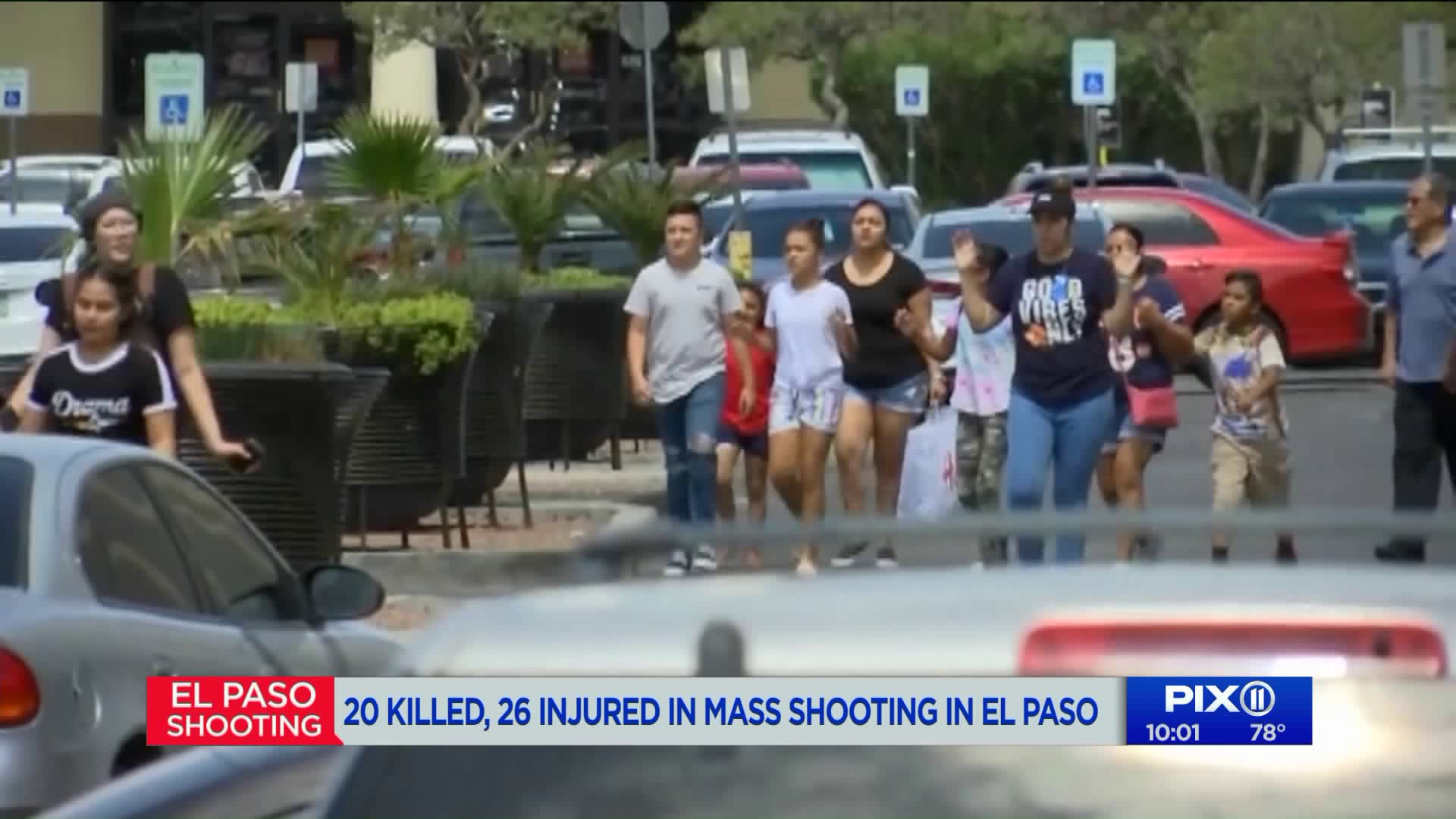 EL PASO, Texas — Twenty people were killed and more than two dozen injured in a shooting Saturday in a busy shopping area in the Texas border town of El Paso, the state's governor said.

Meanwhile, the police chief said among the possibilities being investigated is whether it was a hate crime. Two law enforcement officials who spoke to The Associated Press on condition of anonymity identified the suspect taken into custody as 21-year-old Patrick Crusius of the Dallas area.

Police said another 26 people were injured, most of them being treated at area hospitals. Most of the victims were believed to have been shot at a Walmart near the Cielo Vista Mall, they said, adding that the store was packed with as many as 3,000 people during the busy back-to-school shopping season.

"The scene was a horrific one," said El Paso Police Chief Greg Allen, who added that many of the injured had life-threatening injuries. He said police also had found a manifesto that may have been written by Crusius and posted online — one reason it was being investigated as a hate crime.

Residents were volunteering to give blood to the injured, while police and military members were trying to help people who were looking for missing loved ones.

"It's chaos right now," said Austin Johnson, an Army medic at nearby Fort Bliss, who volunteered to help at the shopping center and later at the school that was serving as a reunification center.

Adriana Quezada, 39, said she was in the women's clothing section of Walmart with her two children when the shooting happened.

"I heard the shots but I thought they were hits, like roof construction," she said.

Her 19-year-old daughter and 16-year-old son threw themselves to the ground, then ran out of the Walmart through an emergency exit. They were not hurt, Quezada said.

She said she saw four men, dressed in black, moving together firing guns indiscriminately. Police later said they think there was just one shooter.

Police said by midafternoon that a suspect was in custody and the public was no longer in danger. Gomez said the suspect, who used a rifle, was arrested without incident. Police believe he was the "sole shooter" but are continuing to investigate reports that others were involved.

The mass shooting in El Paso came less than a week after a gunman opened fire on a California food festival. Santino William Legan, 19, killed three people and injured 13 others last Sunday at the popular Gilroy Garlic Festival, and died of a self-inflicted gunshot wound.

Ryan Mielke, a spokesman for University Medical Center of El Paso, said 12 people were brought to the hospital with injuries, including one that died. Two of the injured were children who were being transferred to El Paso Children's Hospital, he said. He declined to provide additional details on the victims.

Eleven other victims were being treated at Del Sol Medical Center, according to hospital spokesman Victor Guerrero. He said those victims ages ranged from 35 to 82.

Texas Gov. Greg Abbott called the shooting "a heinous and senseless act of violence" and said the state had deployed a number of law enforcement officers to the city.

Presidential candidate and former Texas congressman Beto O'Rourke appeared a bit shaken as he appeared at a candidate forum Saturday in Las Vegas shortly after news of the shooting in his hometown was reported.

O'Rourke, who said he had called his wife before taking the stage, said the shooting shatters "any illusion that we have that progress is inevitable" on tackling gun violence.

The Democrat said he heard early reports that the shooter might have had a military-style weapon, saying we need to "keep that (expletive) on the battlefield and do not bring it into our communities."

"We have to find some reason for optimism and hope or else we consign ourselves to a future where nearly 40,000 people a year will lose their lives to gun violence and I cannot accept that," O'Rourke said.

El Paso, which has about 680,000 residents, is in West Texas and sits across the border from Juarez, Mexico.

The city has become a focal point of the immigration debate, drawing Trump in February to argue that walling off the southern border would make the U.S. safer, while city resident and O'Rourke led thousands on a protest march past the barrier of barbed-wire topped fencing and towering metal slats.

O'Rourke stressed that border walls haven't made his hometown safer. The city's murder rate was less than half the national average in 2005, the year before the start of its border fence. Before the wall project started, El Paso had been rated one of the three safest major U.S. cities going back to 1997.

Heidi Beirich, director of the Southern Poverty Law Center's Intelligence Project, also said the El Paso shooting suspect wasn't on her group's radar screen prior to the shooting. "We had nothing in our files on him," she wrote in an email. "Scary how young these shooters have been. Almost too young to even build a footprint in the radical right."

The AP/USATODAY/Northeastern University mass murder database tracks all U.S. homicides since 2006 involving of four or more people killed, not including the offender, over a short period of time regardless of weapon, location, victim-offender relationship or motive.