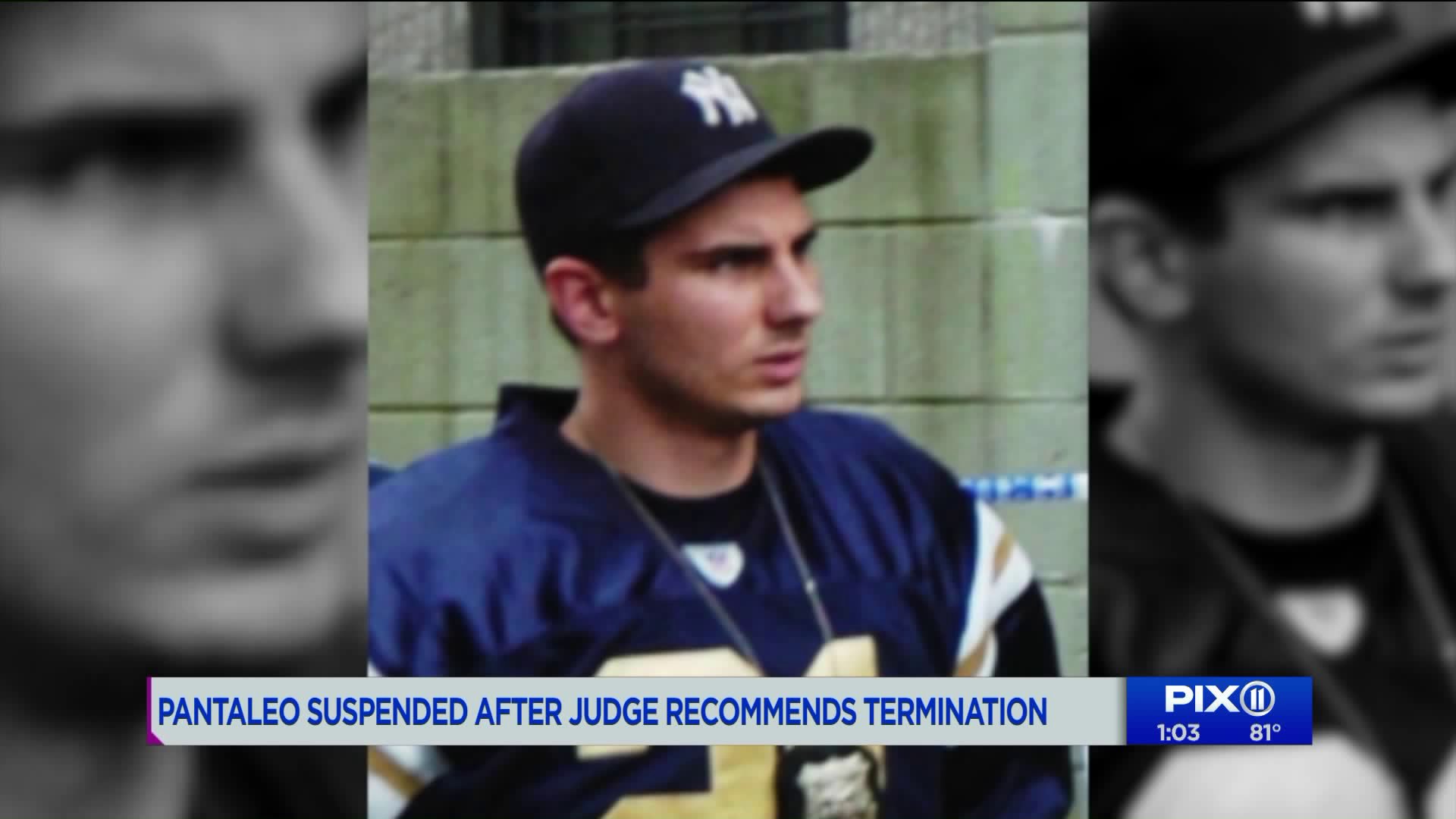 Daniel Pantaleo, the officer at the center of the Eric Garner case, has been suspended after a judge recommended he be terminated from the police force. 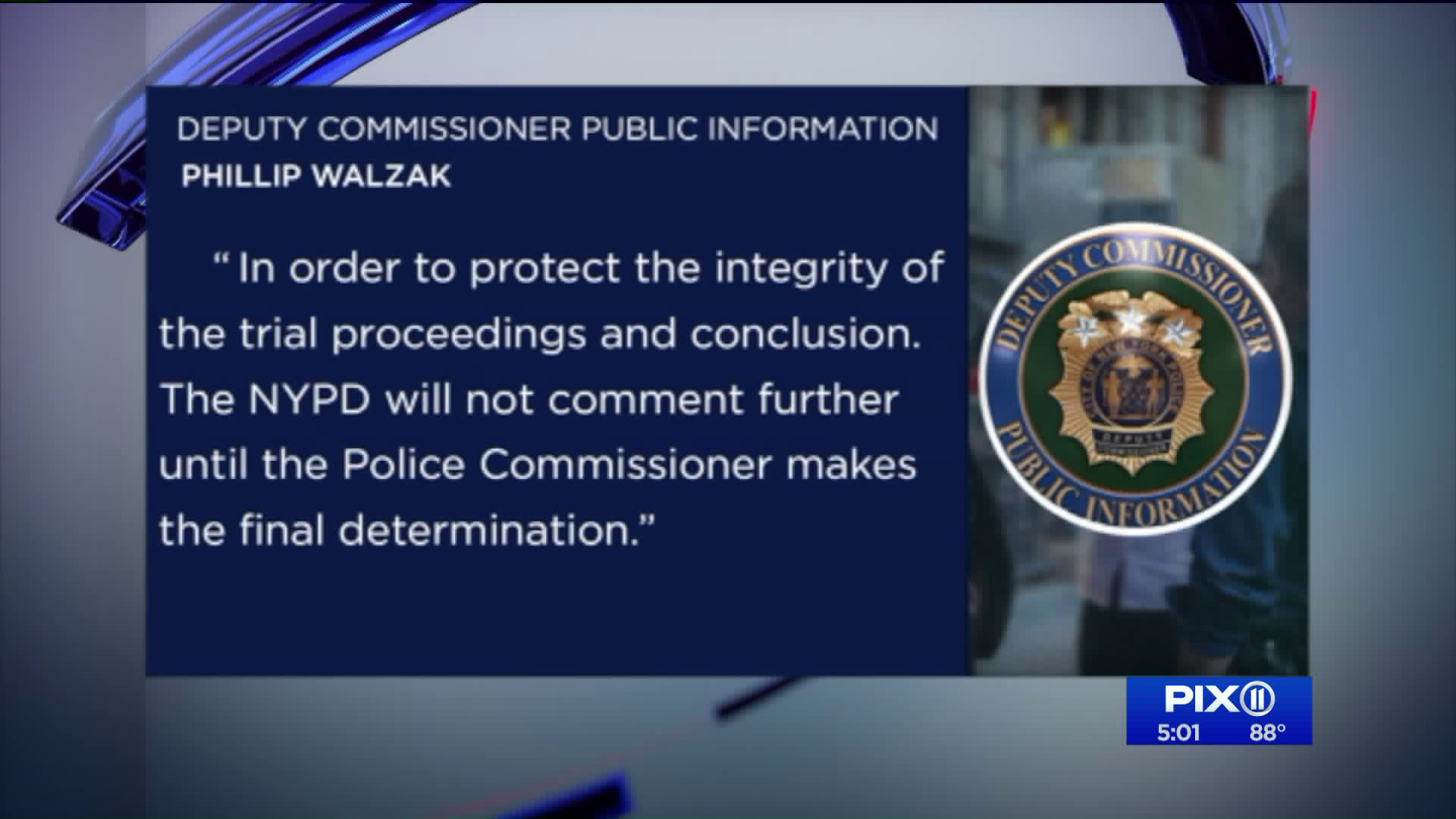 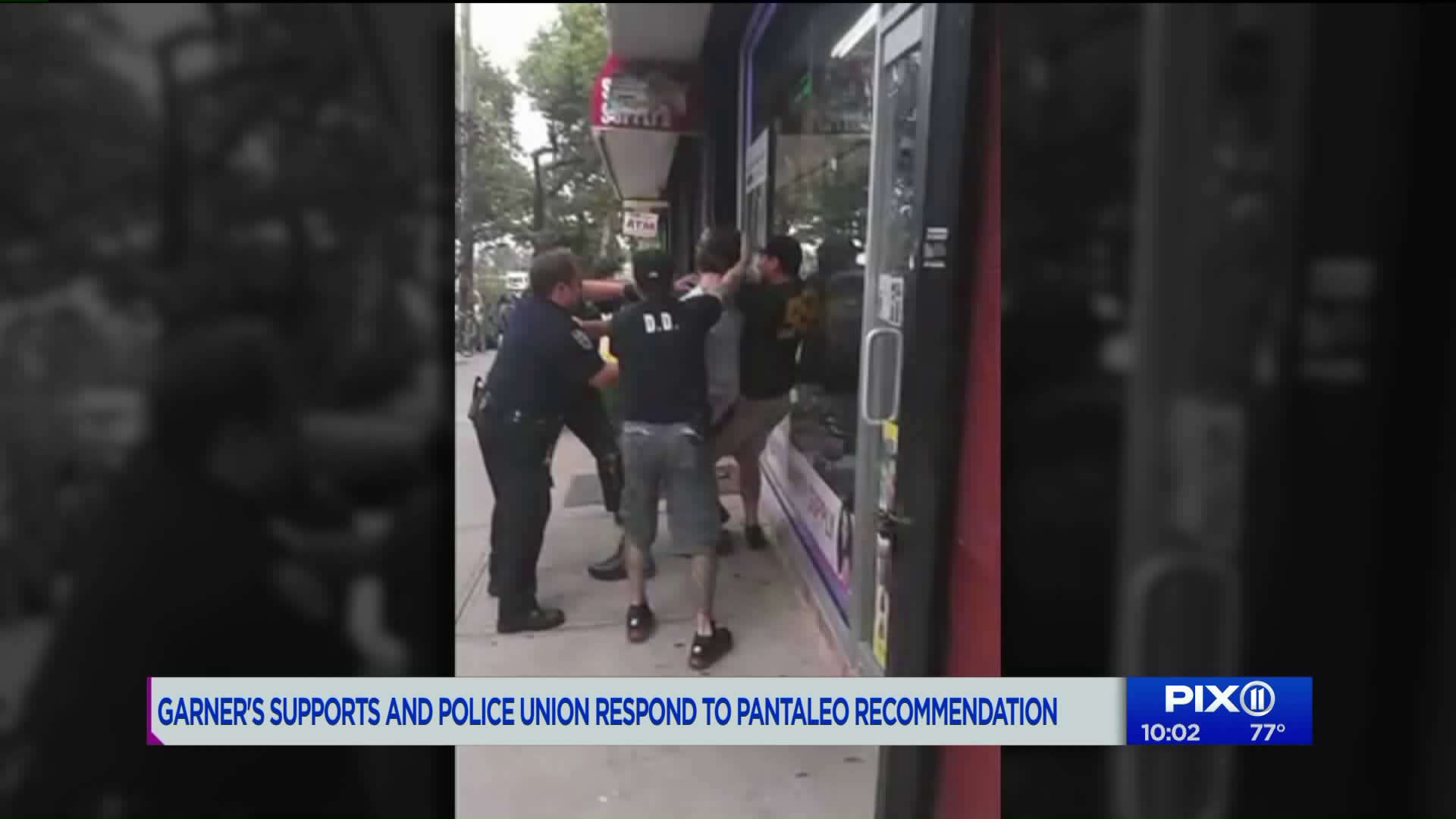 NEW YORK — Daniel Pantaleo, the officer at the center of the Eric Garner case, has been suspended after a judge recommended he be terminated from the police force.

Multiple sources confirmed to PIX11 on Friday that NYPD Deputy Commissioner of Trials Rosemarie Maldonado issued the recommendation, which was delivered to the Civilian Complaint Review Board’s leaders and Pantaleo’s attorney, where they will be have about two weeks to draft a response.

Although Maldonado issued the recommendation, Police Commissioner James O’Neill has the final say.

The NYPD released a statement following the issued recommendation, citing that Pantaleo has been suspended, effective immediately after the termination recommendation was issued.

"The Police Commissioner is aware of media reports and public statements today regarding the Pantaleo trial. Consistent with the NYPD disciplinary process, the Police Commissioner has not been provided the draft report.  It has been shared with the CCRB and the defense, for a standard period of final comment from each.  The Deputy Commissioner of Trials will then deliver the completed report, with those comments, to the Police Commissioner for final disposition – to be determined this month.  Officer Pantaleo has been suspended, effective today, as is the longstanding practice in these matters when the recommendation is termination.

“All of New York City understandably seeks closure to this difficult chapter in our City’s history.  Premature statements or judgments before the process is complete however cannot and will not be made.  In order to protect the integrity of the trial proceedings and conclusion, the NYPD will not comment further until the Police Commissioner makes the final determination.”

The New York City Civilian Complaint Review Board issued a statement after the ruling:

“Today’s decision confirms what the Civilian Complaint Review Board always has maintained: Officer Daniel Pantaleo committed misconduct on July 17, 2014, and his actions caused the death of Eric Garner. The evidence the CCRB’s prosecutors brought forth at trial was more than sufficient to prove that Pantaleo is unfit to serve. Commissioner O’Neill must uphold this verdict and dismiss Pantaleo from the Department, as was recommended by both the CCRB and the Deputy Commissioner of Trials.”

President of the Police Benevolent Association, Patrick J. Lynch, released a statement after the ruling, blasting the decision, calling it "pure political insanity":

"This is pure political insanity. If it is allowed to stand, it will paralyze the NYPD for years to come. The judge ignored the evidence and trampled P.O. Pantaleo's due process rights in order to deliver the result that the grandstanding politicians and protestors demanded. The only hope for justice now lies with Police Commissioner O'Neill. He knows the message that this decision sends to every cop: we are expendable, and we cannot expect any support from the city we protect. He knows that if he affirms this horrendous decision, he will lose his police department."

Mayor Bill de Blasio called the recommendation a "beginning of some peace" although the fight isn't over.

“Today, we finally saw a step towards justice and accountability. We saw a process that was actually fair, and impartial, and I hope this will now bring the Garner family a sense of closure, and the beginning of some peace,” Mayor de Blasio said.

He also added that as the city and the rest of the nation fight for justice, "Full justice means there could never be another tragedy and another death like Eric Garner." Since Garner's death, de Blasio said the entire police force has been retrained to deescalate conflict, and their approach to the community is "entirely different today."

“We have a lot more work to do, we’ll be at this a long time, but we all have a sense of common mission that there could never be another tragedy like this," de Blasio said.

"It's in our power to do something different."

The crux of the case remains whether Pantaleo used a chokehold, which is banned by the NYPD; the officer denies he used the move.

"There's going to be justice. I have confidence in that," de Blasio said during the debate, adding that Pantaleo's professional fate should be decided within the next 30 days. "For the first time, we are not waiting on the federal Justice Department, which told the city of New York that we could not proceed because the Justice Department was pursuing their prosecution."

Ahead of the recommendation being unsealed, Garner’s daughter, Emerald Garner, told PIX11 that de Blasio shouldn’t run for president. “For me, Eric Garner is a deal breaker for everything.”

She also warned O’Neill that if Pantaleo keeps his job, things are “not going to be pretty.”

Garner died on July 17, 2014, after police attempted to arrest the 43-year-old father of six, who was allegedly selling loose cigarettes illegally on Staten Island, a crime for which he previously he had been arrested.

Garner's family and Rev. Al Sharpton react to the ruling in video below: