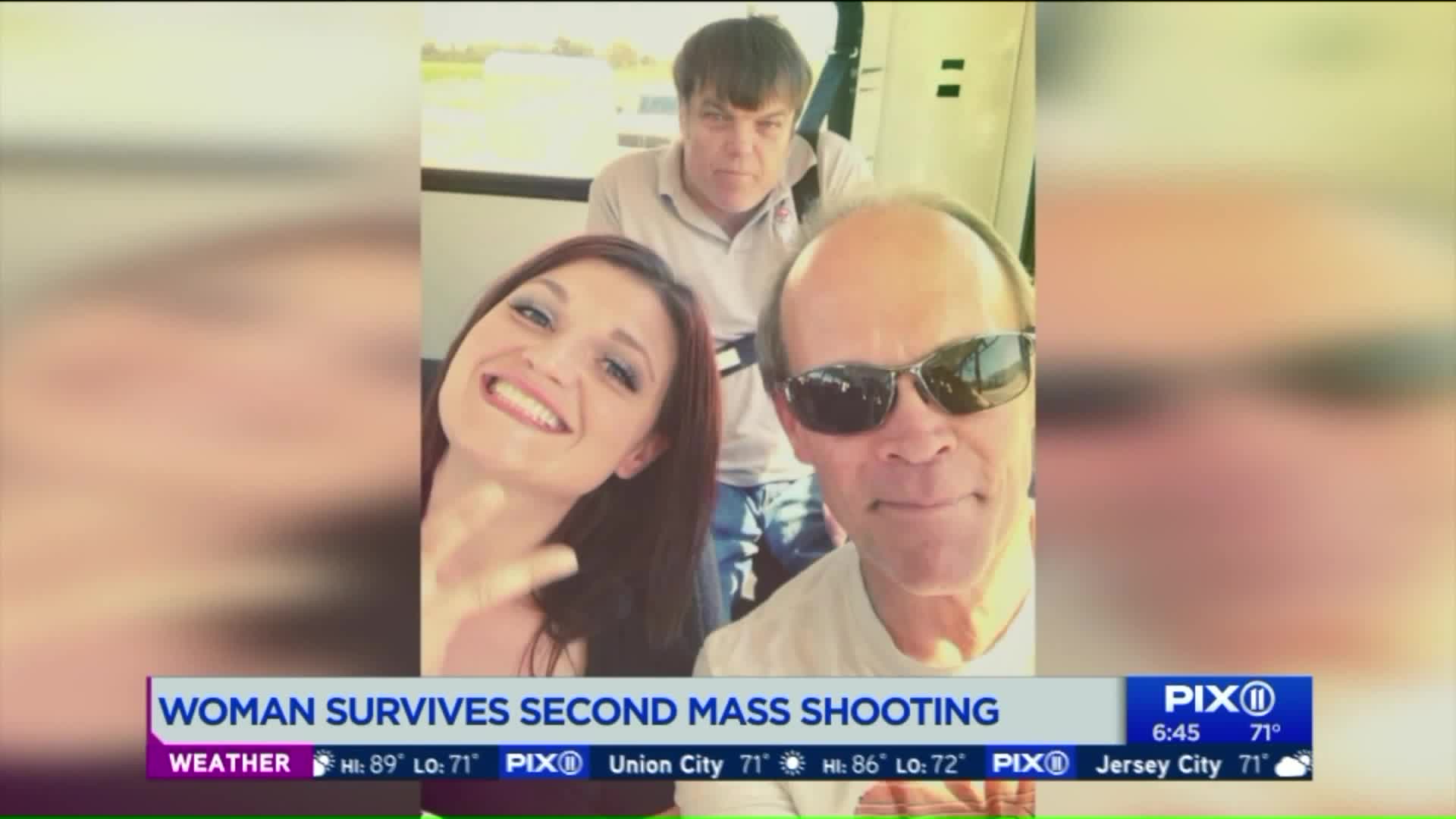 Alicia Olive speaks after surviving the Gilroy Garlic Festival shooting in California, the second mass shooting she`s survived in two years. Olive, and her two friends, were also at the Route 91 Harvest festival in Las Vegas in 2017 when a gunman fired into the crowd, killing 58 people and injuring more than 500.

After surviving the deadliest mass shooting in modern US history, three friends were not expecting history to repeat itself two years later.

In 2017, Christopher and George Cook were in Las Vegas during the Route 91 Harvest festival, an outdoor country music concert, when a gunman fired into the crowd killing 58 and injuring more than 500. They managed to escape with no injuries.

Their escape from the gunfire was captured by a photographer at the time. It showed George, who is in a wheelchair, being pushed by a woman, who Christoper said was an off-duty nurse.

'This was a family thing'

Sunday, the brothers attended the Gilroy Garlic Festival when a gunman opened fire. Three people were killed and 12 injured.

Physically the Cook brothers escaped unharmed, however mentally, Christopher told CNN he's been dealing with a wave of emotions.

"You think you're grateful for everything you have until something like this happens," he said.

George told CNN the two experiences were very different for him.

"It wasn't even a thought at all," he said. "This was a family thing."

George said he definitely felt like a target in Vegas, but this time around in Gilroy he didn't feel that as much and he said maybe that's because he's been to many festivals since Vegas.

"Time heals all," he said. "I'm not gonna change what I do or how I enjoy myself."

The brothers were not alone for the garlic festival. They were joined by their friend Alicia Olive, who also survived the Route 91 festival. The three didn't know each other at the time of the Vegas shooting but ended up connecting on Facebook through a support group.

Olive, from Vegas, attended the music festival when she was hired as a bartender. After surviving the mass shooting, she said she fell into a deep depression.

"You don't want to leave the house much...there's no desire to," she said about her feelings after the shooting.

In April, she moved away from Vegas to California, where she told CNN that's when she feels she was able to start living again.

She said Gilroy was the first time she was able to really let her guard down and go out to a public event like that.

Both Christopher and Olive said the difference between their experience in Vegas versus Gilroy is that they were a bit calmer during the shooting than they were the first time around and now, they've learned coping skills for the aftermath that they didn't have before.

"I was able to be a bit more calm this time," Christopher said. "Difference was, in Vegas you didn't know where it [gunfire] was coming from, but in Gilroy we knew that it [gunfire] was behind us."

Christopher said he's changed the way he experiences festivals and outdoor events in that he looks for the closest exit to wherever he finds himself. He said he doesn't want people to stop enjoying these events as long as they are aware of their surroundings.

In a Facebook Live from Sunday, Olive is overcome with emotion as the shuttle drove a bus full of passengers from the festival to the parking lot.

The survivor support group on Facebook brought the three together because they shared a common experience, but their relationship has grown quickly by choice from strangers to family.

"My brother and I have never had sisters, but Alicia has made such an impact on our lives," Christopher said.

He told CNN when he watched Olive's Facebook Live over again he broke down at the thought of potentially losing her in their life that day.

Olive said now she's going to focus on making a difference and supporting those survivors who need it, whether that be through a hug, a conversation or advocating for stricter gun laws.