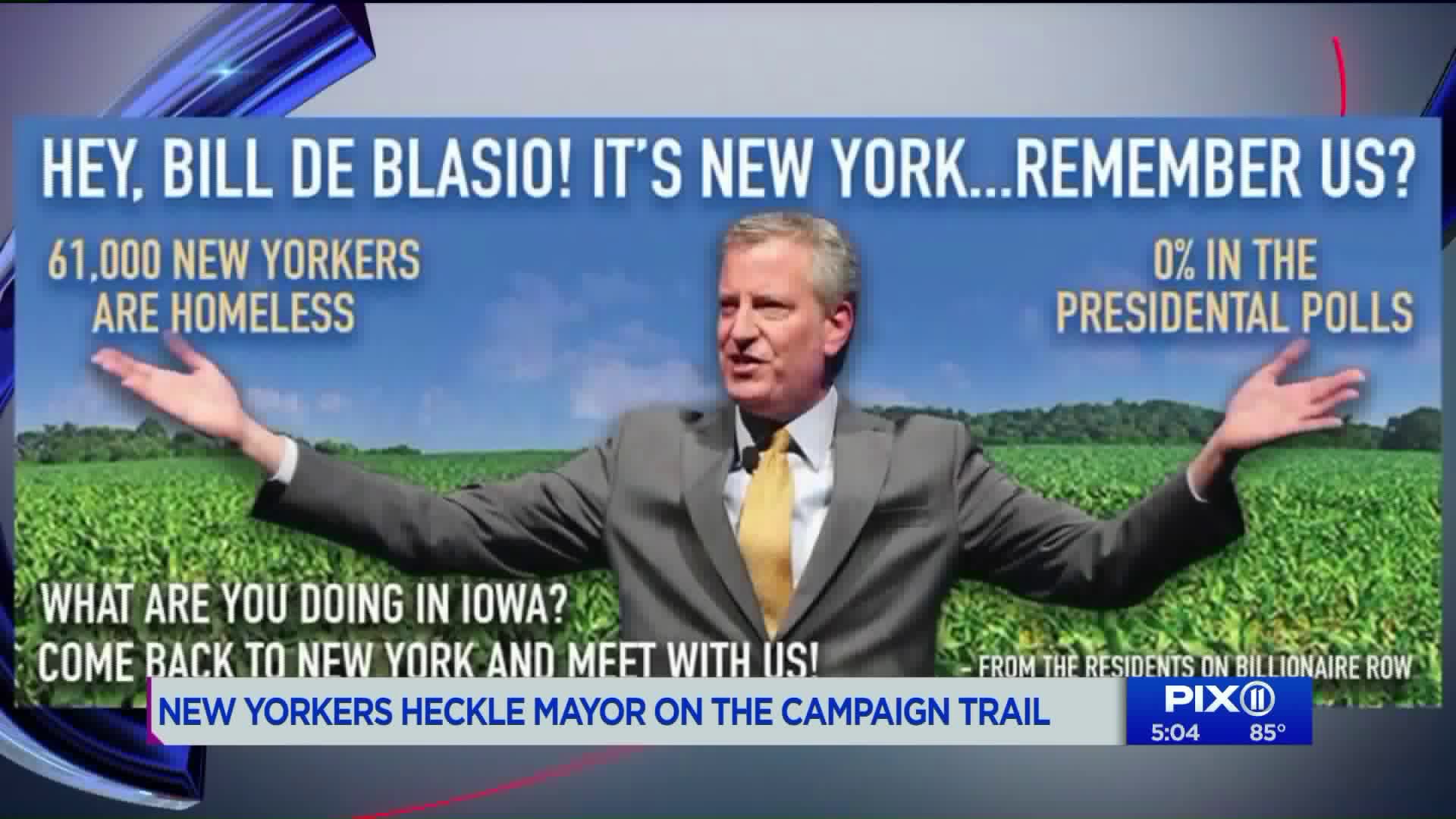 Mayor Bill de Blasio was back on New York soil Thursday, but some New Yorkers are fed up with his presidential campaign.

LOWER MANHATTAN — Mayor Bill de Blasio was back on New York soil Thursday, but some New Yorkers are fed up with his presidential campaign.

So they are taking their grievances straight to the mayor on the campaign trail.

The West 58th Street Coalition held a press conference Thursday to announce it is spending approximately $100,000 on billboards around Iowa.

"The mayor now has left and abandoned the city," Michael Fisher of the West 58th Street Coalition said.

Fisher said the group plans to put dozens around Iowa. They are mad that the city is working on a homeless shelter at the old Park Savoy Hotel on West 58th Street. Fisher said this isn't about preventing a shelter from opening on Billionaire's Row, but that the building is not safe.

"For two years we have been trying to get a meeting with the mayor," he said.

This is just the latest incident of New Yorkers taking their grievances to the mayor, wherever he may be. Wednesday night in Detroit, Michigan activists starting chanting "Fire Pantaleo!" during the presidential debate. Officer Pantaleo is the NYPD officer accused of causing Eric Garner's death.

"There is real energy here at home that he should be paying more attention to than perhaps what's happening in Iowa or South Carolina," political analyst Basil Smikle said. "He should also expect some backlash for him going off and campaigning elsewhere and not focusing enough attention on those issues."

Mayor de Blasio was criticized when he was on the campaign trail during the July West Side blackout. When he got back from campaigning he said, "I want people to understand that this job and any public CEO today, you have to take charge wherever you are and I did that."

Other groups that have followed the mayor out of state, include NYCHA residents and the Police Benevolent Association.

PIX11 asked the mayor's office to address the heckling on the campaign trail. Instead, a spokesperson addressed the Park Savoy homeless shelter controversy.

“We’re committed to giving New Yorkers experiencing homelessness the opportunity to remain in their communities. We look forward to opening this site and providing high quality shelter services to those who need it most.”