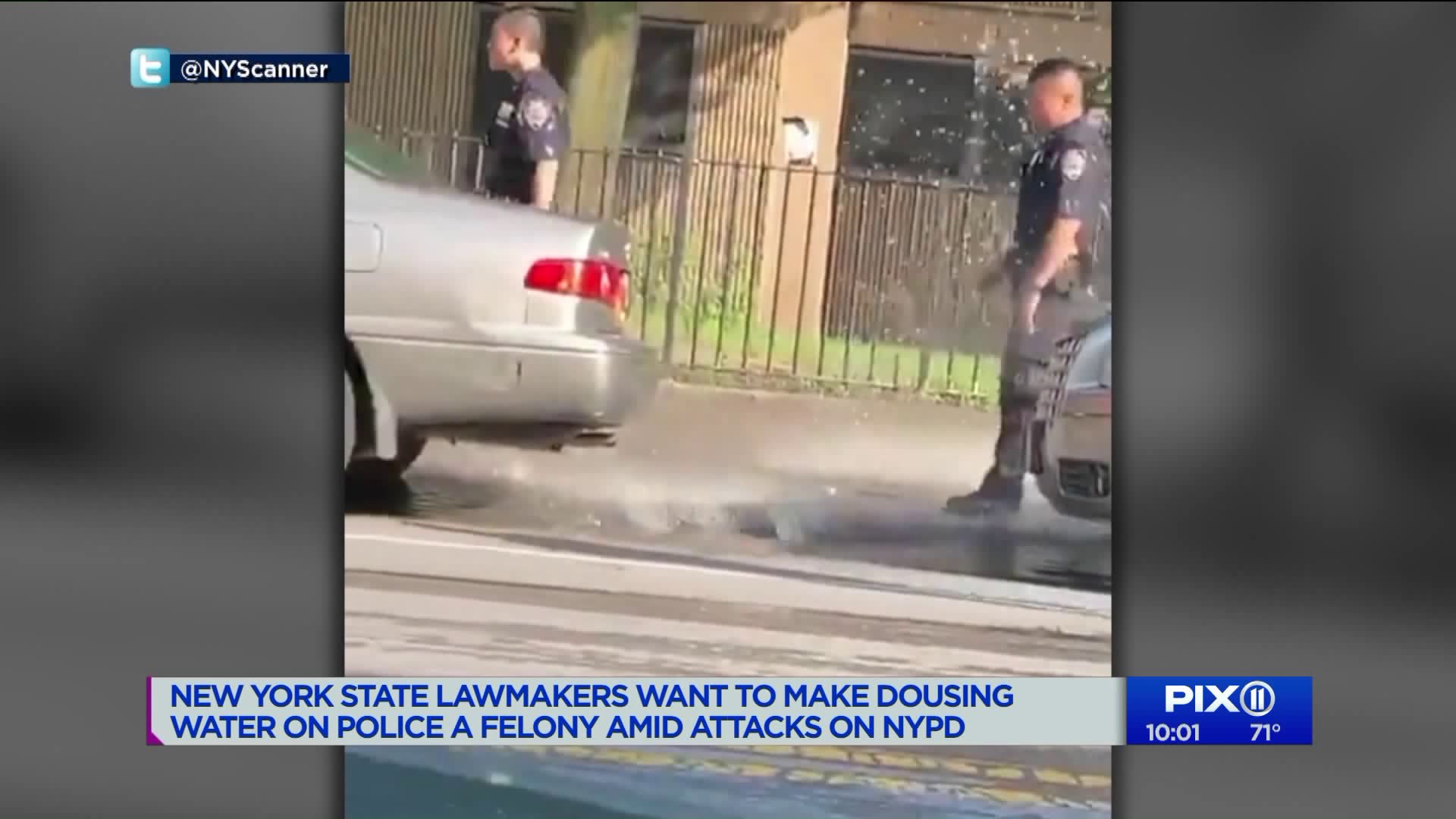 State lawmakers are pushing for new legislation that would make throwing or spraying liquid at an on-duty police officer a felony, after recent water-dousing incidents against NYPD officers. Assemblymen Mike LiPetri and Michael Reilly introduced the bill at a press conference at city hall, along with police union officials.

LOWER MANHATTAN — State lawmakers are pushing for new legislation that would make throwing or spraying liquid at an on-duty police officer a felony, after recent water-dousing incidents against NYPD officers.

Assemblymen Mike LiPetri and Michael Reilly introduced the bill at a press conference at city hall, along with police union officials.

"It might be a water bucket today, it might be a cement bucket tomorrow," said Pat Lynch, President of the NYC PBA.

The legislation would allow officers to arrest those that attack officers with water, making t a Class E felony to throw or spray water, or any other substance, against an on-duty police or peace officer. This charge would be punishable by up to 1 to 4 years in prison.

Current legislation would only warrant a ticket for such a crime, according to LiPetri. This bill would make dousing an on-duty officer with liquid an exception.

Two law enforcement officials were left soaking wet on Wednesday in Woodhaven in another dousing incident, according to police.

The incident occurred at Jamaica Avenue and 86th Street, as two on-duty uniformed were working at the location when an unidentified man sprayed water from a bottle on them. There were no injuries as a result of this incident.

It's the latest in a series of law enforcement officials to have had water poured on them after two occurred last week in Harlem and Brooklyn.

The officers in Harlem were responding to reports of a disorderly group when they saw someone they recognized with an outstanding warrant, Monahan told his fellow officers. As chief of department, Monahan supervises uniformed patrol commanders and is the NYPD's highest-ranked uniformed member.

"As they're making that arrest, there are a couple of guys who thought it was all right to throw water and a bucket at the cops," he said. "Well, that ain't all right."

The officers called for backup and the group scattered, Monahan said.

In the Brooklyn incident, the officers were walking away from a call when they were attacked with water, Monahan said. He then criticized the officer, who continued walking away after being doused.

"Any cop who thinks that that's all right, that they can walk away from something like that, maybe should reconsider whether or not this is the profession for them," he said to applause. "We don't take that."

A senior NYPD official told CNN the police involved in the videos "should have taken action and they'll be reprimanded for not doing so."

In an internal memo obtained by CNN, the department outlined how officers should react when involved in incidents, such as being doused with water while on duty.

It says if an officer is injured from spraying they can charge the individual with "assault in the second degree."

The memo also states that police officers, while expected to endure a higher level of offensive language, are not expected to tolerate conduct that may cause risk of injury to themselves or the public, or that interferes with their duties.