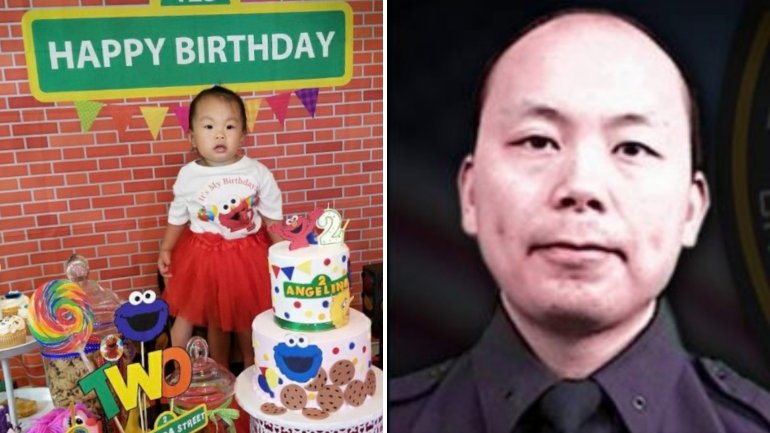 Angelina Liu, often called the NYPD's "miracle baby," celebrated her second birthday on Thursday. She’s the daughter of slain NYPD officer Wenjian Liu and Pei Xia Liu, who became pregnant through IVF two and a half years after her husband’s death.

NEW YORK — Angelina Liu, often called the NYPD's "miracle baby," celebrated her second birthday on Thursday with a visit to the police commissioner’s office and a “Sesame Street”-themed party at home.

“She loves Elmo and the Cookie Monster,” said the little girl’s mother, Pei Xia, who had a custom cake made for Angelina with the iconic “Sesame Street” characters on it.

Pei Xia Liu gave birth to Angelina two and a half years after her husband, Wenjian Liu, was slain with his partner Rafael Ramos in their patrol car on December 20, 2014, as they were parked outside a housing project in Brooklyn.

The killer was a man who had taken a bus to New York City from Baltimore.

Wenjian and Pei Xia Liu had only been married three months, and Wenjian’s parents had lost their only child.

Nearly two years after he was killed, Pei Xia started getting painful shots to prep her for InVitro Fertilization. The procedure worked the first time. Angelina Liu was born on July 25, 2017.

The toddler strongly resembles her late father and has similar eyes to Wenjian’s.

The NYPD and officers from the 84th Precinct have embraced Angelina as one of their own.

She received many gifts, and her godmother gave her a large toy kitchen, along with a chef’s hat, princess gown, and apron.

The widow is starting a foundation in Wenjian Liu’s name and will host a fundraiser October 23rd.