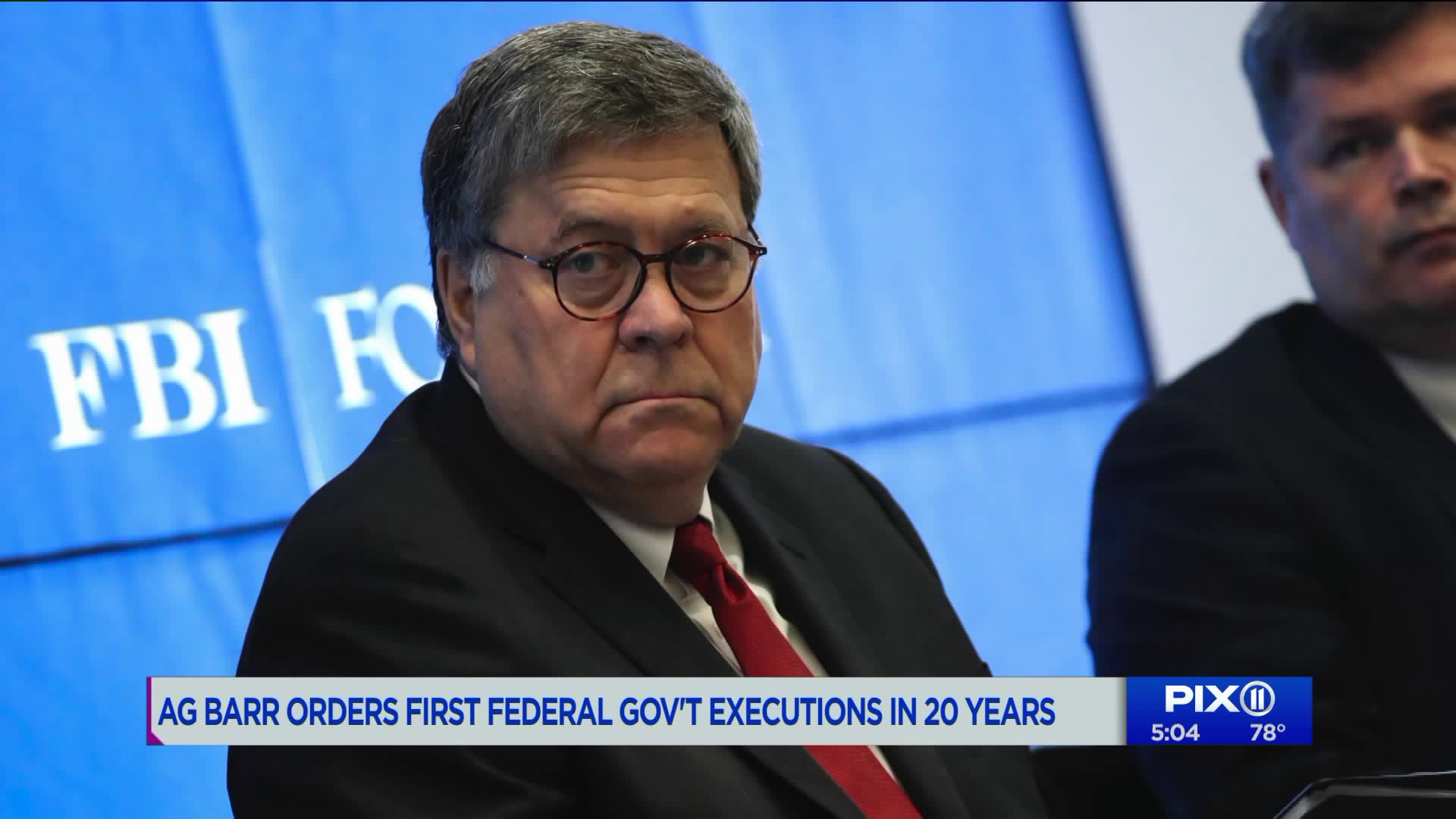 The federal government has ordered the death penalty to be reinstated for the first time in nearly two decades, as Attorney General William Barr directed the Bureau of Prisons to schedule the execution of five inmates after adopting an updated execution protocol.

The federal government has ordered the death penalty to be reinstated for the first time in nearly two decades, as Attorney General William Barr directed the Bureau of Prisons to schedule the execution of five inmates after adopting an updated execution protocol.

After 16 years without an execution, Barr has directed the head of the Bureau of Prisons to execute "five death-row inmates convicted of murdering, and in some cases torturing and raping, the most vulnerable in our society — children and the elderly" in December and January, according to a statement from the Department of Justice.

In his statement, Barr said the government was moving to seek justice against the "worst criminals" and bring relief to victims and family members. At the same time, however, the government's move is likely to reignite legal challenges to the specific protocol and reinvigorate a debate concerning the constitutionality of lethal injection.

The move represents a dramatic reversal after more than a decade-long hiatus in the federal use of capital punishment, as President Donald Trump has taken on the issue and called to "bring back the death penalty." The death penalty is legal in 29 states and the federal government, though there have been no federal executions in nearly two decades and the number of people facing state executions has been on the decline.

The debate over capital punishment has been longstanding, with advocates arguing it's a deterrent against serious crime and that justice is served for the victims or victims' families. Opponents, however, point to the racial disparities of death row inmates, the financial costs, and wrongful convictions.

At Barr's direction, the Bureau of Prisons has adopted the Federal Execution Protocol Addendum which "replaces the three-drug procedure previously used in federal executions with a single drug—pentobarbital," the Justice Department announced.

Thursday's announcement by DOJ to schedule the executions of five death row inmates follows an effort begun by former Attorney General Jeff Sessions for the federal government to restart executions by lethal injection.

Sessions had asked the Bureau of Prisons to determine a way to proceed.

The directive from Sessions for the Bureau of Prisons to determine a way to resume the use of the death penalty was recently concluded after a thorough legal and procedural review, a Justice official said.

Potential legal challenges ahead
Barr's announcement directs the federal government to use a new protocol — similar to what several states use — that has been under review for a number of years.

The executions have been ordered to begin later this year, but could be delayed by legal challenges. Legal experts question whether any execution will take place as soon as December.

"Saying that you are going to adopt a protocol is not the same thing as having a protocol properly adopted through the required administrative procedures," said Robert Dunham, the executive director of the Death Penalty Information Center, a group that has been critical of how the penalty is administered. "You can't just say it and have it happen. There is a legal process for a protocol to go into effect and there is a legal process for challenging the protocol."

Dunham predicts that there will be opposition once the protocol is formally proposed.

Already in the District of Columbia there has been an ongoing lawsuit involving the federal lethal injection process. There will be a range of questions about how the federal government is obtaining the drug it intends to use.

A Federal Bureau of Prisons spokeswoman told CNN that per statute, the director of the BOP designates the date and time for an execution.

"BOP will continue with planning and administrative steps to ensure the execution is ready to commence on the designated date and time," spokeswoman, Nancy Ayers, said.

An official from the federal prison in Terre Haute, Indiana, where each man is scheduled to be executed in the coming months, deferred comment to BOP.

The attorney for Lee— the inmate scheduled to be put to death first under the new procedure and who has been on death row since 1999 — argued that "executing (Lee) would be a grave injustice" given the "unreliability of the evidence" and that "his indisputably more culpable" co-defendant, Chevie Kehoe, received a life sentence.

"Given the problems that undermine the fairness and reliability of Danny Lee's conviction and death sentence, the Government should not move forward with his execution," said Morris Moon, Lee's attorney.

Inmates on death row
There are currently 62 inmates on federal death row, with about the same number of white and black federal death-row inmates, according to the Death Penalty Information Center. Capital punishment is legal in 29 US states. There are about 2,600 death row inmates, with California detaining the most.

According to the center, of the five men named by Barr Thursday, three are white, one is black, and one is Native American.

Only three federal inmates have been executed in the United States since the federal death penalty was reinstated in 1988 after a 16-year moratorium.

Louis Jones, a Gulf War veteran, was the last federal inmate executed in March 2003 for the kidnapping and murder of 19-year-old Army Pvt. Tracie McBride.

"Let me be clear: capital punishment is immoral and deeply flawed," Sen. Kamala Harris, a former prosecutor, said on Twitter. "Too many innocent people have been put to death. We need a national moratorium on the death penalty, not a resurrection."

Sen. Dianne Feinstein, the top Democrat on the Senate Judiciary Committee, called it "wrong" and argued that the federal government should be "leading the effort to end this brutal and often cruel punishment, not advocating for its return."

"It's time we evolve and put this terrible practice behind us," she added.

Massachusetts Sen. Elizabeth Warren, whose home state has abolished the death penalty, argued that the US criminal justice system "has a long history of mistakes when it comes to capital punishment—especially when it comes to Black and Brown people."

"We cannot let a broken system decide the fate of incarcerated Americans," Warren said on Twitter.

Sen. Bernie Sanders of Vermont, who is also running for president, too disavowed the announcement, saying on Twitter, "There's enough violence in the world. The government shouldn't add to it." He also pledged to abolish the death penalty if elected president.