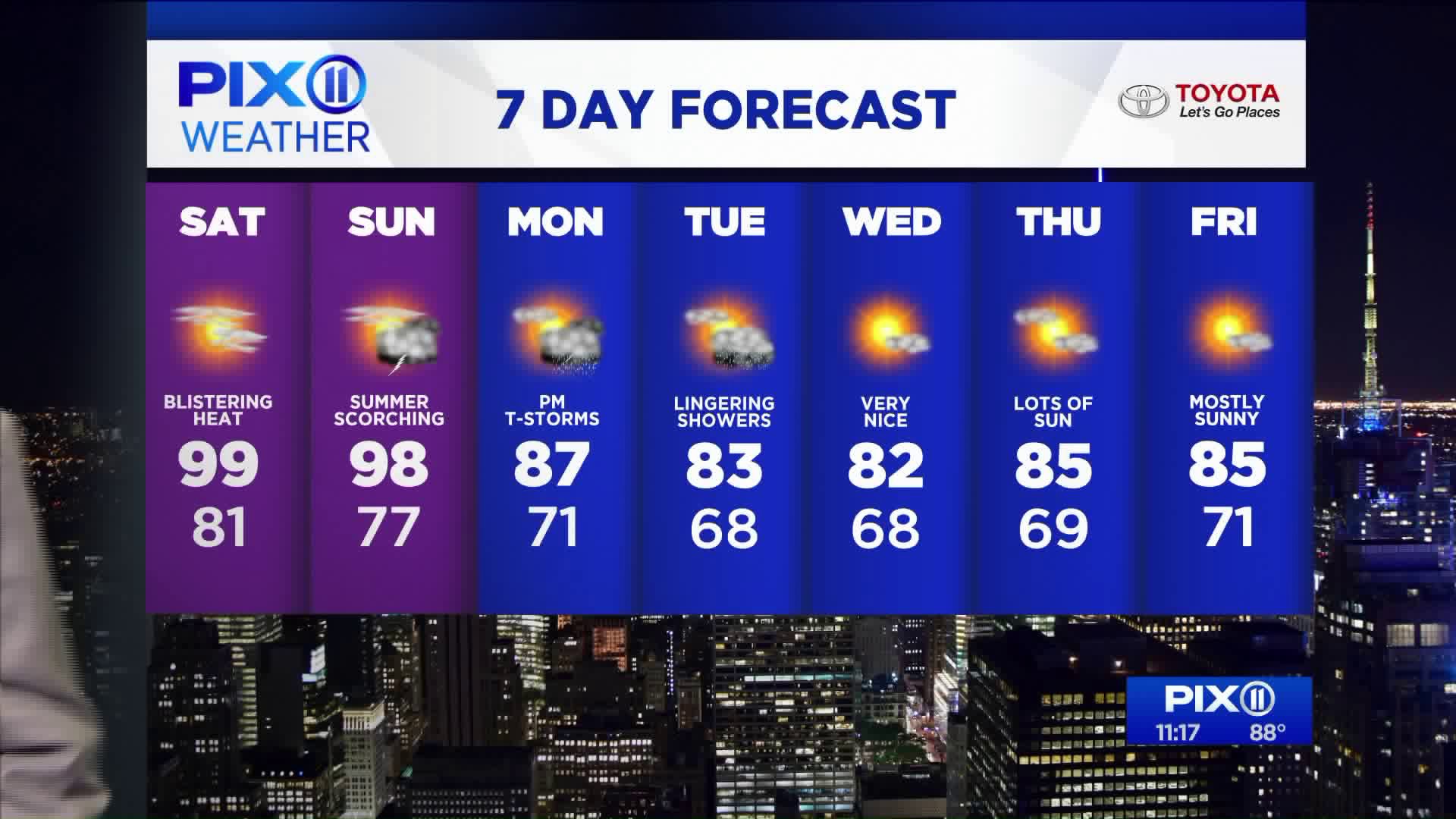 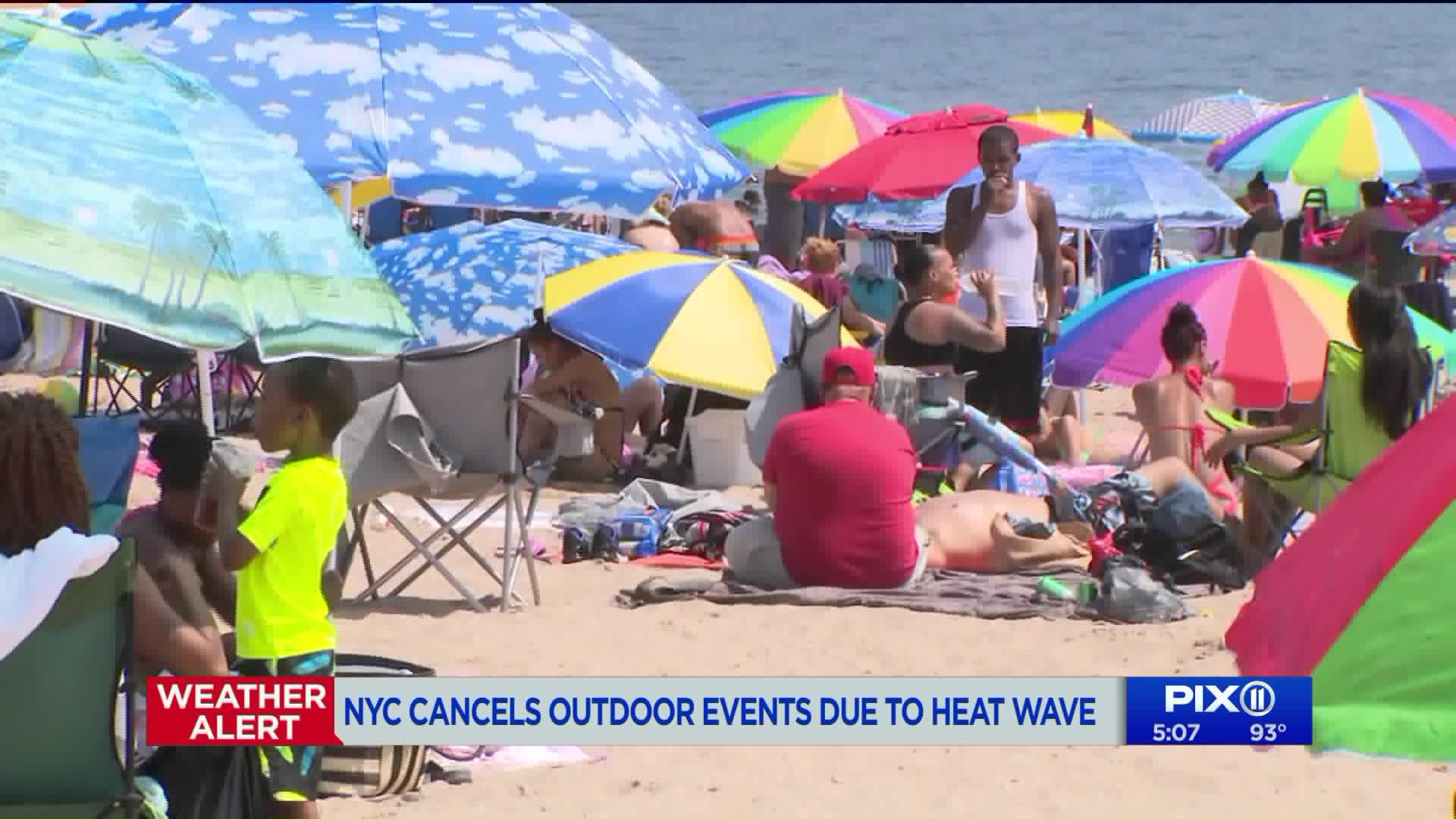 With temperatures predicted to be in the high 90s for Saturday and Sunday, with a heat index well over 100, city officials have continued calling off big events that could put New Yorkers at risk during an expected heat wave.

The heat will be so intense this weekend that it could be deadly — Saturday could feel like a boiling 115 degrees.

That's the word from both the city health commissioner and Mayor Bill de Blasio, who urge New Yorkers to take the heat emergency as seriously as they would a blizzard.

"Our fear is people dying," Mayor de Blasio said at a news conference Friday afternoon regarding the heat emergency he declared through an executive order. "People may not be expecting a heat index of 110," the mayor warned.  "That's gonna feel like over 110 degrees."

As the dangerous heat wave continues, and most of the Central U.S. to East Coast remain under Excessive Heat Warnings and Heat Advisory, it is important to protect yourself and your loved ones. #WeatherReady . https://t.co/asAP108BNk #HeatSafety pic.twitter.com/M7ONHdrBG6

De Blasio announced Friday that outdoor festival OZY Fest, scheduled for Saturday and Sunday in Central Park was canceled because of the heat forecast for the weekend.

A de Blasio spokeswoman said a Times Square commemoration of the 1969 moon landing has been canceled, as well.

Saturday's card of horse racing at New York's Saratoga Race Course was canceled. So were all races Saturday and Sunday at the Maryland Jockey Club in Laurel.

In an executive order that lasts until Sunday night, de Blasio ordered office buildings 100 feet or taller to raise thermostats to 78 degrees and encouraged residents to set their thermostats higher to reduce energy use.

The city is opening about 500 air-conditioned "cooling centers" in public facilities. Public pools were to be open an extra hour (until 8 p.m.) from Friday through Sunday, And the city will set up portable drinking fountains at busy pedestrian areas through Sunday.

It's not just us humans that will be feeling the heat this weekend - our pets are impacted by the heat too! Here are some tips to help keep them safe. pic.twitter.com/MngTcWy9h9

The Brooklyn Defender Services  called  on the mayor and the Department of Corrections Commissioner Cynthia Brann to protect inmates from the heat.

"Most incarcerated people are without air conditioning and the limited number of fans are only in the day rooms, leaving people to swelter, particularly while in their cells," the organization said. "DOC is not providing appropriate summer clothes to many of our clients. People with medical needs have reported feeling nauseous and dizzy."

As the tri-state area sizzles, much of the nation is also dealing with high heat.

About 200 million people were under a excessive heat watch or warning or a heat advisory Friday, according to the National Weather Service.