Pres. Trump walks back from ‘send her back’ chant of his supporters, but skepticism is high 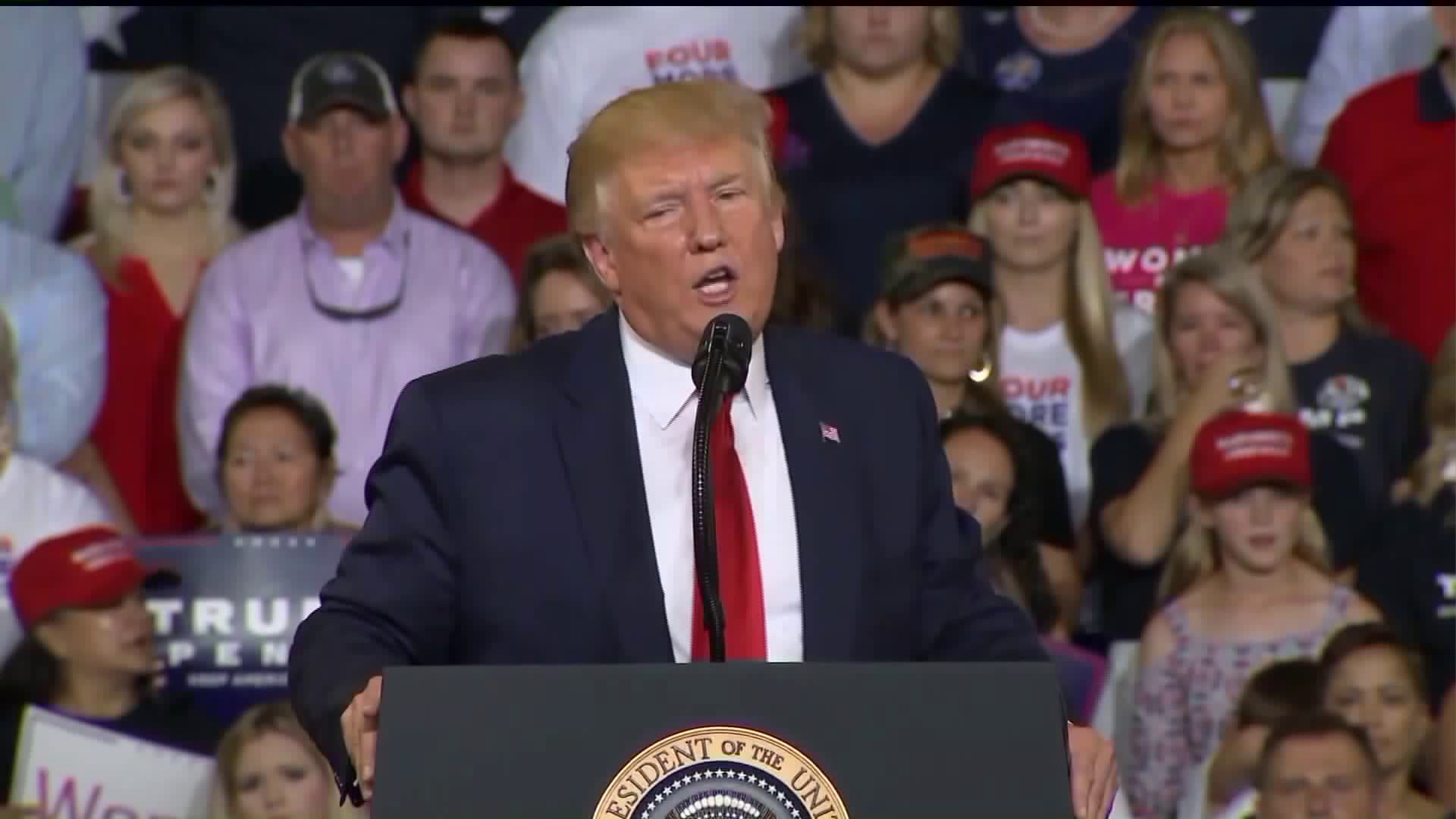 President Donald Trump on Thursday chided his supporters who chanted "send her back" when he questioned the loyalty of a Somali-born congresswoman, joining widespread criticism of the campaign crowd`s cry after fellow Republicans warned it could hurt the GOP in next year`s elections. 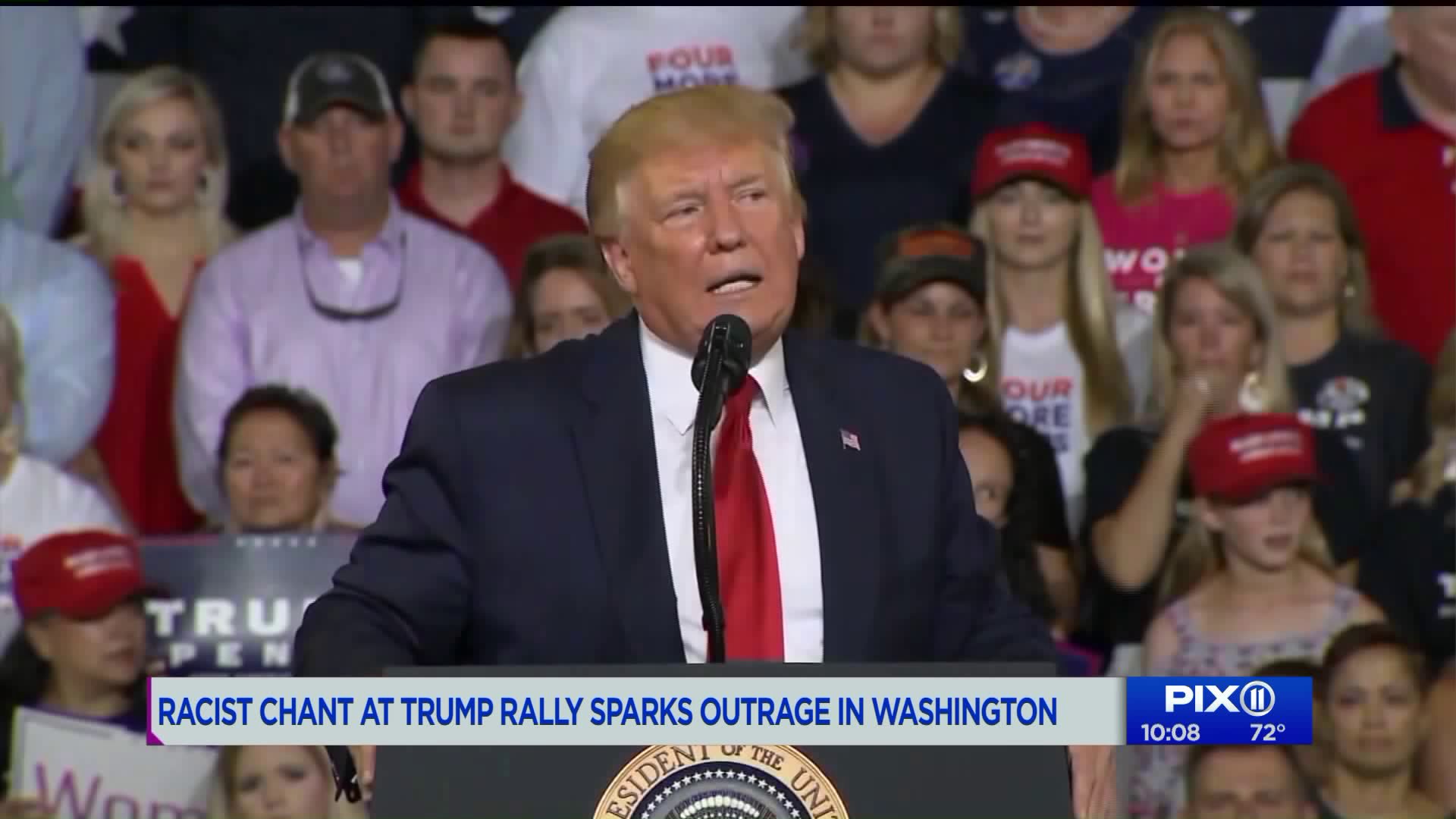 MIDTOWN MANHATTAN -- They're three words that have sparked widespread reaction across a wide variety of media.

"Send her back" was the chant that thousands of supporters of President Donald Trump shouted, in response response to comments the president made against Congresswoman Ilhan Omar (D-MN), at a rally the president held on Wednesday night. However, on Thursday afternoon, he tried to walk back from the chant, claiming that he disagreed with it, and he claimed that he'd tried to stop his supporters from shouting it. Video from the event shows nothing of the sort.

It's got New Yorkers skeptical, but it leaves professional political watchers unsurprised. They see this as the latest step in a calculated effort by Mr. Trump to keep support among his base strong, with an eye toward the 2020 election, whether he approved of the chant or not.

Omar, from Minnesota, is one of four liberal Democratic congresswomen of color about whom the president tweeted days ago that they should "go back and help fix the totally broken and crime infested places from which they came."

However, on Thursday afternoon, in the Oval Office, the president's comments weren't consistent with what he's said about Omar and others in the recent past.

When asked why he didn't stop his supporters from chanting "send her back," he said, "Actually, I did. I think I started speaking very quickly. I disagree with it, by the way. It was quite a chant. I felt a little bit badly about it."

However, the video itself does not support what the president claims.

The chant went on for at least 12 seconds, while Pres. Trump remained silent, allowing it to go on. He then continued with his speech, criticizing the Somali-born U.S. citizen who represents more than 600,000 U.S. citizens in her district.

New Yorkers who spoke with PIX11 News met the president's disavowal of the chant with skepticism.

"Does it matter if we believe him or not?" asked Merriah Youmans. "Actions speak louder than words."

Pranit Tukrel was similarly doubtful. "He says a lot of things," he said about the president. "So it's hard to tell if whether or not what he's saying is actually factual or not."

Meanwhile, at Trump Tower on Thursday afternoon were Callyn Johnson and her grandmother, Rochelle Ihry. Johnson was wearing a "Make America Great Again" cap and t-shirt. Both she and her grandmother are from West Fargo, South Dakota, and identified themselves as Trump supporters who were on their way to enter Trump Tower.

When asked about the president's comments against Omar, both women said they'd never heard of her, even though she represents a district in the state next to theirs.

They also, however, expressed support -- for Omar.

"I like it that she's here," Ihry said, "and that she's thinking a lot about the United States."

The president's comments about the congresswoman contrast very sharply with that statement.

It could be an indication that President Trump may not need strong rhetoric against political opponents in order to keep his base's support.

As a political analyst pointed out, however, that's not stopping the president.

"Words like this activate his base," said Baruch College political science professor Thomas Halpern, "and he believes it's central to getting him re-elected. And I think he's probably right."

On Thursday, the president did not give any indication as to what he'd do if the chant is repeated at future Trump rallies.

Afaf Nasher, executive director of the new york chapter of the Council on American Islamic Relations, tells PIX11 news, “her remarks are hers to make, and it is one thing to criticize the content of her remarks. It’s another thing to rant and rave ‘send her back home’ or to make those kinds of racist comments, which don’t actually argue with content of what she’s saying, but rather pick up on race, her national origin, in the most bigoted and vilest ways.”