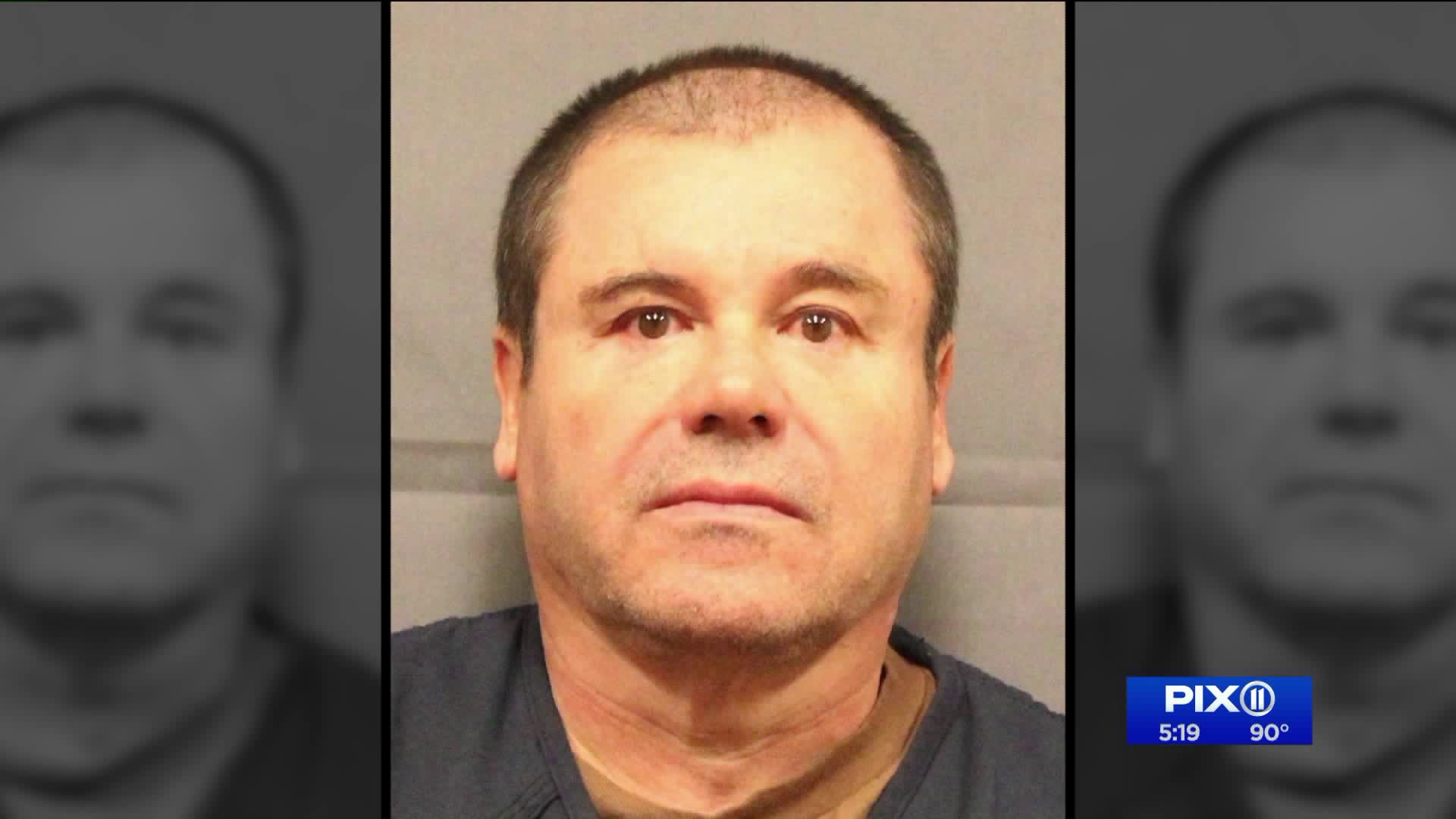 "It's very clear the United States is not any better than any other corrupt country," El Chapo said in Spanish, as he wrapped up a 15 minute statement to the court.

"My case was stained and you denied me a fair trial when the whole world was watching," Guzman said to U.S. District Judge Brian Cogan of the Eastern District of New York.

Yet the Special Agent in Charge of New York’s Drug Enforcement Administration — Ray Donovan — fired back, “Joaquin ‘Chapo’ Guzman was brought to the United States to face the one thing international drug traffickers fear the most, the American Judicial System.”

The 62-year-old drug billionaire, convicted in February of pumping hundreds of tons of cocaine, heroin and marijuana into the United States during a brutal 25 year reign over the Sinaloa cartel, entered court Wednesday in a dark grey suit and blew a kiss at his much younger wife, former beauty queen Emma Coronel.

Below: PIX11's Mary Murphy reports on the sentencing from outside the courthouse

When given the chance to speak, Guzman quickly launched into complaints about his prison conditions, since he was flown from Mexico to MacArthur Airport on Long Island 30 months ago.

"I have been forced to drink unsanitary water. I have been denied access to sunlight," he said, telling the judge his only light came through the slivered opening in an air duct.

"It's been a lack of respect for human dignity," El Chapo continued, saying his conditions "have been filled with torture."

El Chapo's lawyers had filed a motion for a new trial, citing the interview one anonymous juror conducted with VICE, claiming other jurors ignored the judge's instructions not to look at coverage of the sensational case during the trial.

One damaging story that emerged right before jury deliberations said the government had evidence El Chapo had young, teenaged girls transported to his residence over the years for sex, calling the girls his "vitamins."

This evidence was not allowed into the trial.

Regarding the alleged jury misconduct, El Chapo complained to the judge, "That would have resulted in a new trial. You alleged the actions of the jury were not important because there was a lot of evidence against me."

When the prosecution team got its turn, it pointed out, "This defendant has no respect for human dignity or the people he poisoned with his drugs."

Then a woman named Andrea Velez, a former El Chapo victim, faced the feared drug lord, who reportedly buried some of his victims alive after torturing them or shooting them in the head.

Velez, speaking in Spanish, said "I still have nightmares from when Mr. Guzman used me as bait to kidnap a former military person in Ecuador."

Her voice shook when she stated El Chapo "offered one million dollars to the Hell's Angels to end my life. I found out and I escaped with the help of the FBI."

Velez said she had initially met El Chapo because they were supposed to develop a movie project about his life.

"He seemed to be a man with great kindness and charisma," she said.

But Velez said she quickly learned, "If I left the organization, I could only do it in a plastic bag, feet first."

"I confess that I sinned but I paid a high price. I lost my family, my friends. I became a shadow without a name," she said in court.

Velez said she was speaking in open court to warn young people about the danger that lurks behind some of the glamor in the drug world.

When Judge Brian Cogan finally spoke, he said, "The trial record speaks for itself. Despite the fact he may be a good father, the overwhelming evil is so severe. The need for deterrence is clear."

The judge also again cited a "mountain range" of evidence against Joaquin "El Chapo" Guzman Loera, as he sentenced him to life plus 30 years.

Cogan then told El Chapo he has the right to appeal.

The drug lord is expected to land at one of the harshest federal prisons in America.

Ray Donovan of the DEA noted, “A story about drugs, violence, terror and greed that started over 40 years ago in La Tuna, Mexico has come to an end. A life sentence is fitting for a life’s work of drug trafficking.”