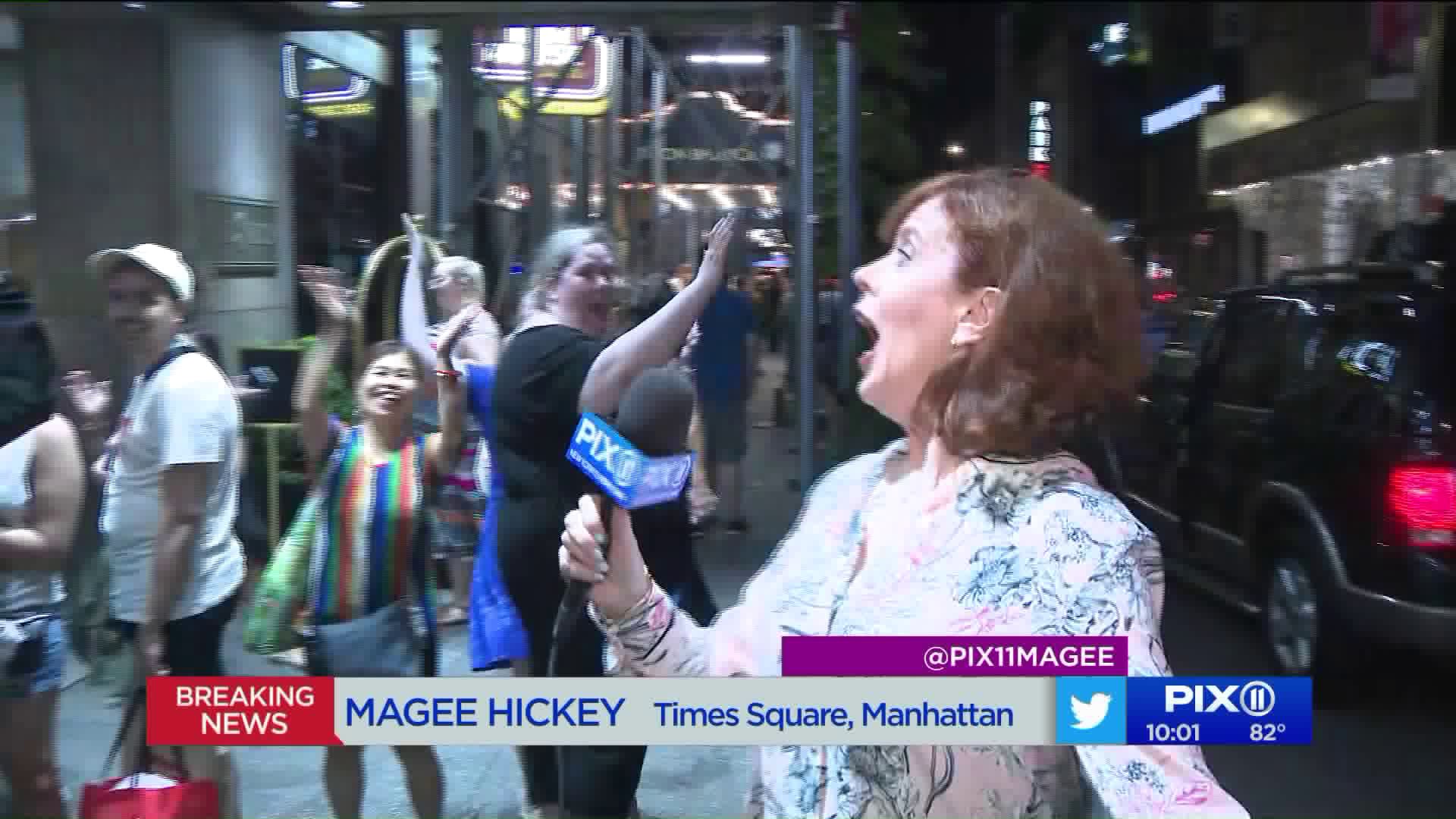 Power has been restored to parts of Times Square, and it happened at the perfect time for our own Magee Hickey. 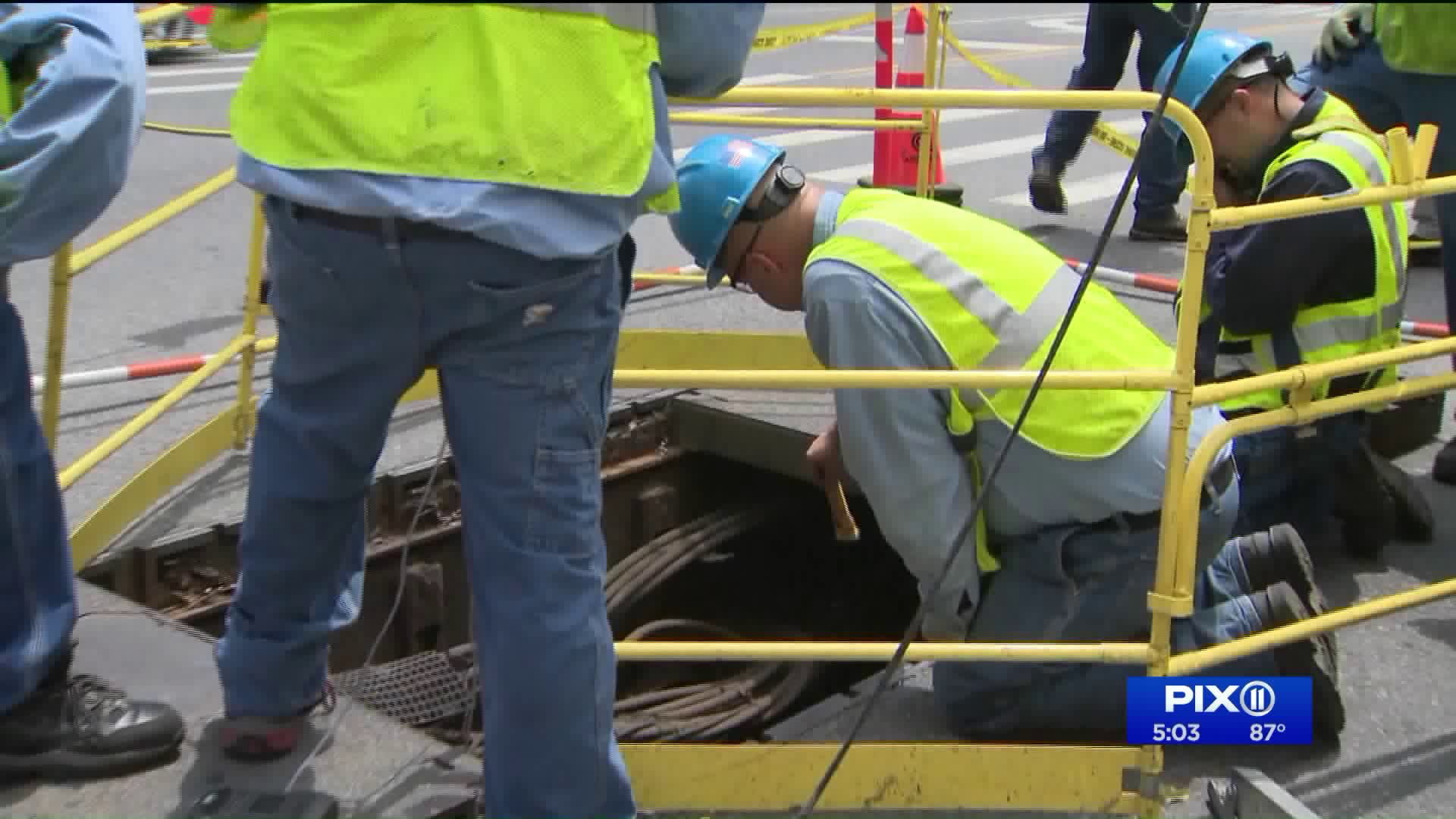 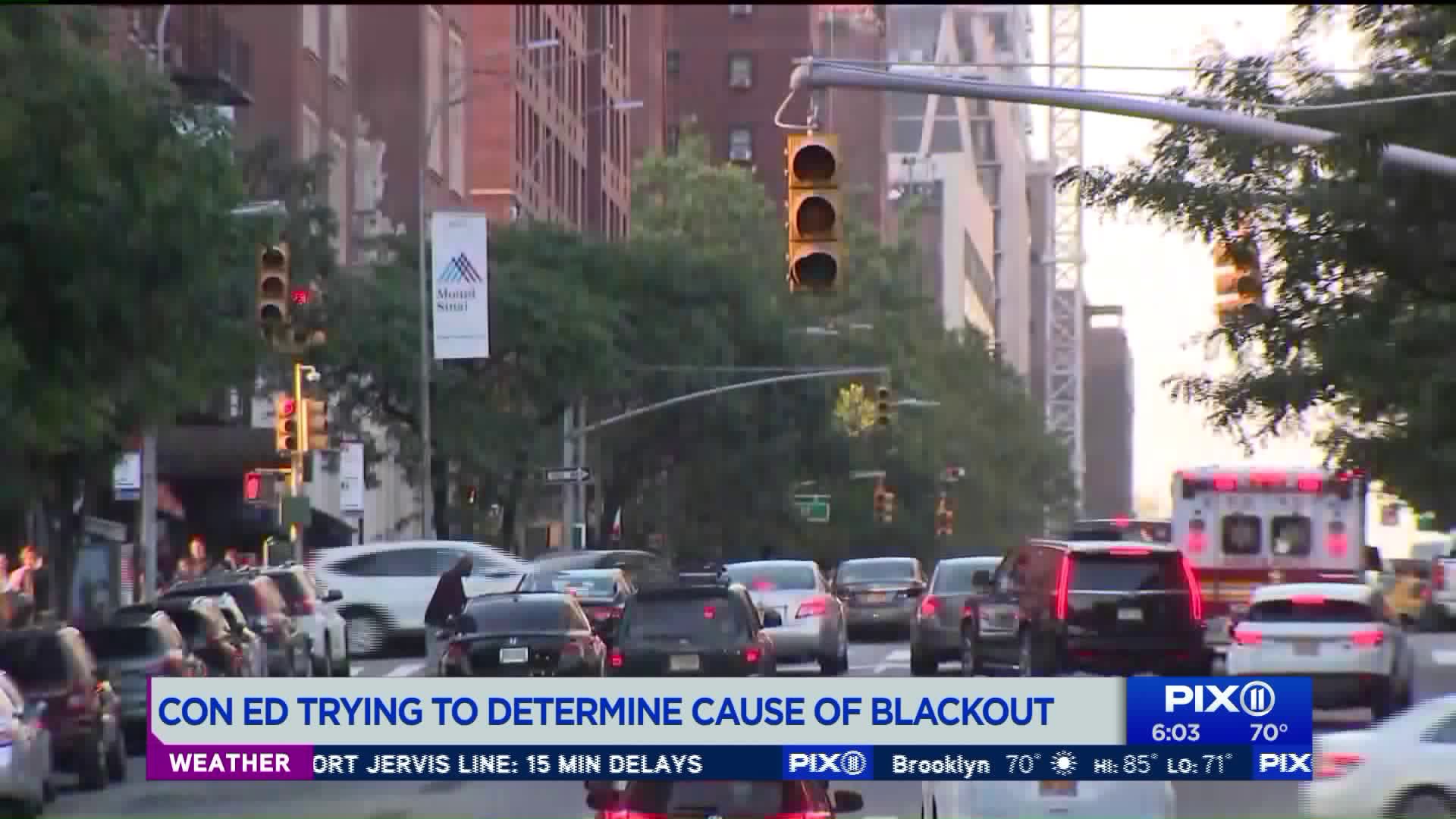 NEW YORK — Mayor Bill de Blasio, joined by top city officials Sunday, assured New Yorkers that Saturday's massive blackout was in no way cyber or physical terrorism. Con Ed said they're still investigating the root of the outage, but are confident that high electricity demand was not the culprit.

De Blasio stared by confirming that there were thankfully no injuries or hospitalizations due to the blackout, despite a spike in emergency calls FDNY Commissioner Daniel Nigro noted later on.

Nigro also said 94 additional EMS units were dispatched during the blackout out of caution. The top FDNY official added that 400 elevators were reported stuck in the outage.

Criswell also confirmed that all MTA subway service had been restored despite service disruptions Saturday night, and that all traffic signals were restored by Sunday.

One hospital, Mount Sinai West on 10th Avenue at 59th Street, was impacted, but they were able to quickly switch to generator power during the outage, Criswell said. The hospital is now back on grid power.

NYPD Commissioner James O'Neill said police were notified of the outage at 6:47 p.m. Saturday, and 400 additional officers were deployed to the affected areas in midtown and other parts of Manhattan's West Side, in addition to 100 additional traffic agents.

The commissioner also mentioned about 2,800 subway passengers were affected by two stalled trains that needed assistance, one at 59th Street and Columbus Circle and the other at 86th Street and Broadway.

Con Ed President Timothy Cawley gave a technical breakdown of the chain of events they believe led to the massive outage, saying a substation near 49th street on the West Side became de-engergized.

While Cawley said the agency is still vigorously investigating the definite root cause of the outage, they are confident that Saturday's blackout had nothing to do with high demand. "No correlation," he said.

Schumer said the Department of Energy's Office of Electricity should investigate the work being done by Con Ed to maintain and upgrade the city's power grid after the power failure on Saturday night in midtown, Hell's Kitchen and into the Upper West Side — some of the busiest parts of Manhattan.

Schumer says the federal agency should consider the New York City blackout a national priority because any lessons learned can be applied nationally.

Power was fully restored to thousands of customers early Sunday after the massive outage plunged a swath of Manhattan's West Side into darkness, eerily happening on the 42nd anniversary of the infamous 1977 blackout that darkened most of the city.

No injuries were reported in Saturday's outage but the it did leave thousands trapped in subways and building elevators. Meanwhile in the streets, some New Yorkers stepped up to help direct traffic at busy intersections where the traffic lights had gone out.

McAvoy said Saturday that a "significant disturbance" on the West Side interrupted power to six networks. The city is carved into individual networks (essentially electricity neighborhoods) that deliver energy. The agency isolated the equipment that may have been the cause.