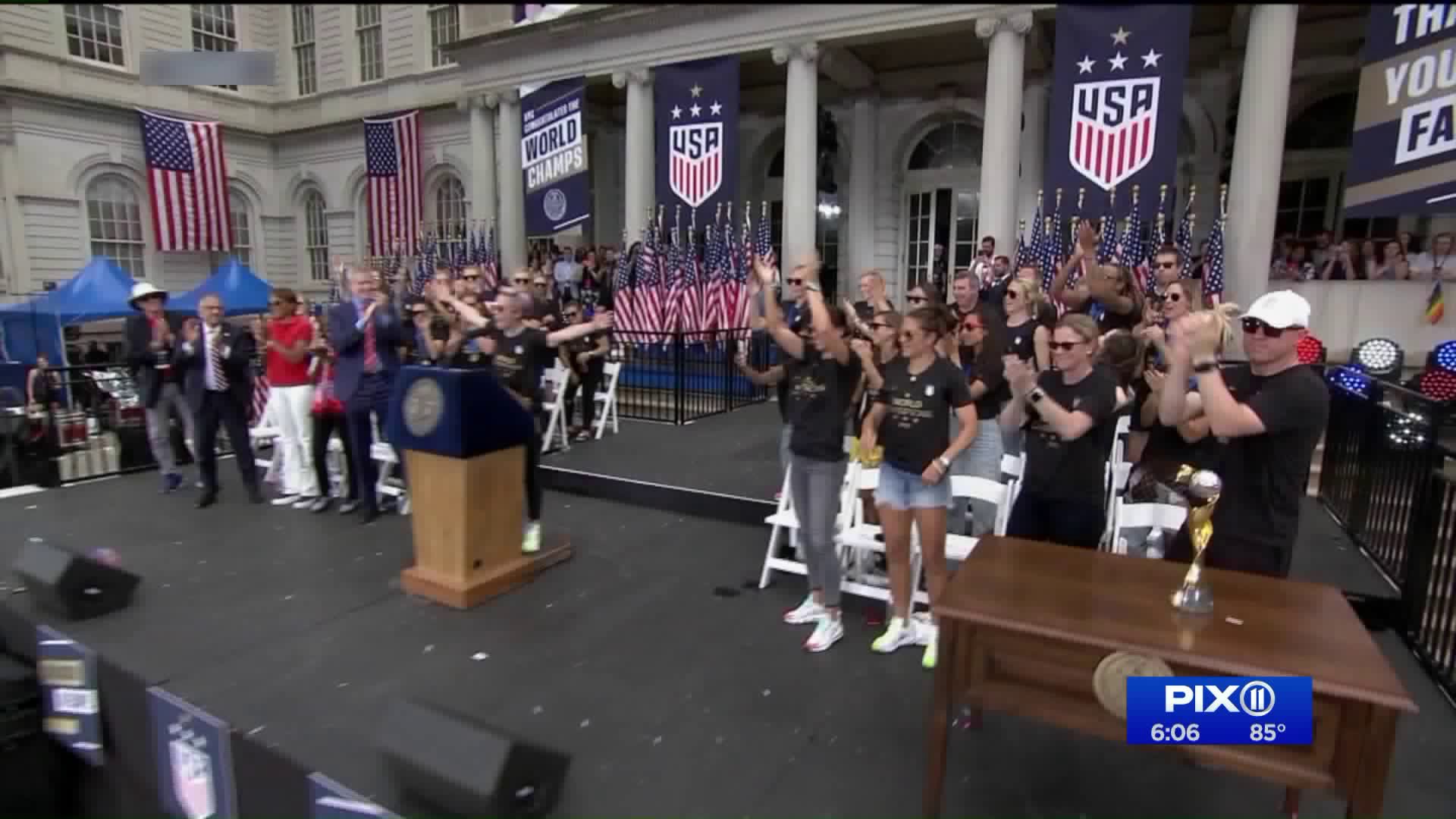 LOWER MANHATTAN -- They are the best athletes in the world in the world's most popular sport.

On Wednesday, the World Cup winners came to the Capital of the World to celebrate, and to be honored. It was one big victory party, with tens of thousands lining the Canyon of Heroes, the southernmost 17-block stretch of Broadway. The celebration of the U.S. Women's National Team had many remarkable moments, some of which could spark controversy.

One of the first memorable moments was led by team co-captain Megan Rapinoe. She, and other women on her float, responding to the cheers of the adoring crowds, that were 20 deep in some places, sang, over and over, "We've got the best fans in the world." They sang the words to the tune of "He's Got the Whole World in His Hands."

Rapinoe also led the team in a very public and unorthodox champagne toast on their float, in which the co-captain held a bottle of champagne over a kneeling Allie Long, and poured.

Minutes later, another player, Kelly O'Hara, requested, and got, a drink of a different kind.

"She tweeted, 'someone grab me a beer,'" Lisa Cobian, a fan cheering behind metal police barriers informed PIX11 News, "so she," Cobian said, pointing to one of the three other friends with whom she attended the parade, "literally left and grabbed her a beer. Someone gave it to [O'Hara], and she saw it was us [who'd bought it, so O'Hara] ran over... and gave her a hug."

After hugging the women thankfully, O'Hara ran back to her float, with her open Coors Light can in hand.

On the next float back was Rockville Centre, Long Island's very own Crystal Dunn. PIX11 News asked her what it was like to have a ticker tape parade to welcome her home.

"New York is the greatest ever!" she exclaimed, over the shouts, cheers, and applause of the crowd. "This parade is incredible! This is just amazing! We appreciate the support, and the love," Dunn said.

Riding on the float with her was Governor Andrew Cuomo. Minutes before the parade began, he ceremoniously signed an executive order intended to end a compensation system in which the celebrated team is paid about a 25 cents for each dollar the U.S Men's National Team can earn.

"I'm telling the U.S. Soccer League," Cuomo said in an interview with PIX11 News, "if you're not paying women their fair share, then you're not doing business in the State of New York."

For his part, the president of U.S. Soccer, Carlos Cordeiro, not only rode on the same float with Rapinoe, but he introduced the winner of the prestigious Golden Boot of the World Cup at the City Hall ceremony after the parade.

It could have been a moment of redemption for U.S. Soccer. Instead, Cordeiro, the head of the organization with the imbalanced pay scale, flubbed the opportunity by mispronouncing the team's standout player's name.

"Megan Rapinoe," he said, with the emphasis on the first syllable, rather than the second, as it's been properly pronounced thousands of times in media coverage -- including that promoted by U.S. Soccer -- in the last few weeks alone.

Rapinoe graciously brushed it off, and turned it into a moment of celebration. She took to the podium, and, even though she has prominently refused to go to the White House to celebrate, she called for American unity.

"This is my charge to everyone," the 34 year-old forward said. "We have to be better. We have to love more, hate less."

She also ended her comments with the quote of the day, thanking our city for honoring her, her 22 teammates, and coach Jill Ellis. Rapinoe did so in a way that might spark controversy anywhere else, but in New York, it was an. expression that many natives of the city could at the very least identify, and some may have said themselves, at some point in their lives.

"New York City, you're the mother f***in' best!" she exclaimed, to a lengthy ovation.

The team headed almost immediately to the airport, where they boarded a plane to Los Angeles for Wednesday night's ESPY Awards ceremony.