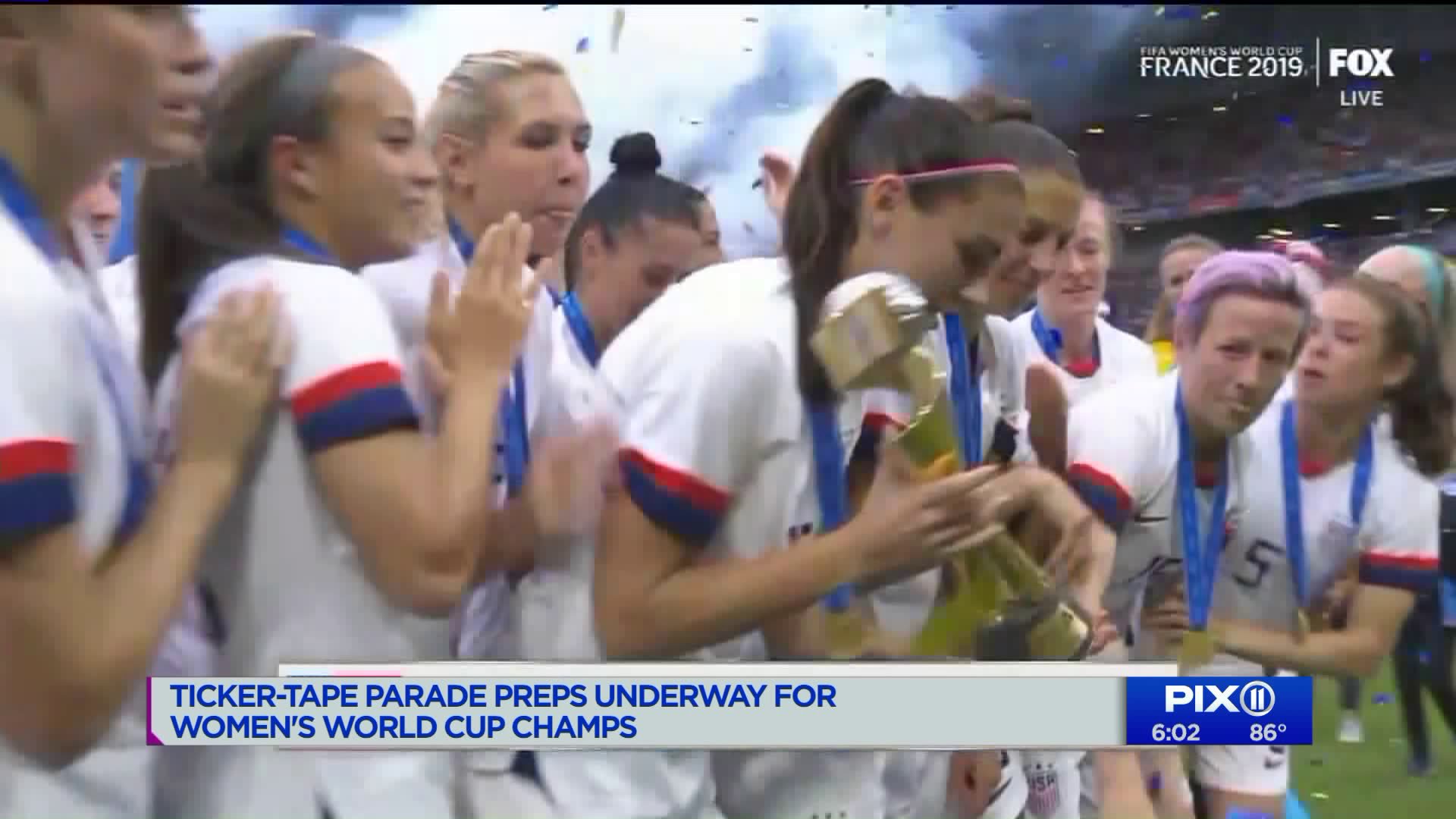 The 2019 champion U.S. Womens National Team marches down the Canyon of Heroes Wednesday.

LOWER MANHATTAN — It's a New York tradition going back more than 130 years.

Ticker tape parades are done rarely these days, and are reserved for the greatest heroes and champions, to which the U.S. Women's National Team, or USWNT, is no exception. They're the latest in a long, storied series of great (and a few not so great) leaders to be celebrated in the Canyon of Heroes, as the 13-block stretch of Broadway from the Battery to City Hall is called.

On Tuesday afternoon, the Downtown Alliance, an organization that manages the Downtown-Lower Manhattan Business Improvement District, distributed a ton of donated recycled paper to 20 of its partnered businesses along the parade route for workers to toss onto the USWNT in celebration.

"We want to keep the tradition alive," said Jessica Lappin, president of the Downtown Alliance, "and we have to throw something."

The practice of tossing paper onto the streets of Lower Manhattan for parades began 133 years ago, and involves an American icon.

When crowds started strolling down Broadway to be on hand for the grand opening of the Statue of Liberty in 1886, "brokers started leaning out their windows on Broadway," said Lappin, "and started throwing ticker tape, and a tradition was born."

The parades have honored sports teams, explorers — including many crews of astronauts, scientists, and a variety of other notables, including some dictators. The shah of Iran was honored in 1949, by request of the State Department.

Ticker tape itself still exists, even though it's basically a novelty item . It's actually a roll of paper, usually an inch wide, and half a football field long, at at least 50 yards.

Before computers, the paper tape was spat out by hole punching machines that made a ticking sound as they punched holes into the paper roll in patterns that represented real-time stock prices, which traders would decipher, in order to make stock trades.

For most of the 206 ticker tape parades that have taken place so far, offices along Broadway have been able to open their windows and cast out whatever items of paper were deemed expendable.

However, with the advent of central air conditioning, many of. the windows along the Canyon of Heroes don’t open any longer. Also, more of the buildings on or near the route than ever before are residential, where people are not likely to be home on a weekday to be able to toss paper down.

Businesses have had to adjust.

“They actually told us we could come out and look at the parade,” Nanika Shaw Brown, who works in the Financial District, told PIX11 News, “so we’re probably going to leave a little earlier and come down.”

The parade starts at 9:30, and should arrive at City Hall in less than an hour. That’s expected to provide ample time for the crowds, which are anticipated to be 5 to 10 people deep, to show their appreciation for American heroes, New York style.

“There's nothing like it!” exclaimed Lappin, in an interview. “These women are heroes, and pioneers for civil rights,” she continued. “In the moment that we're in, they really captured the imagination.”