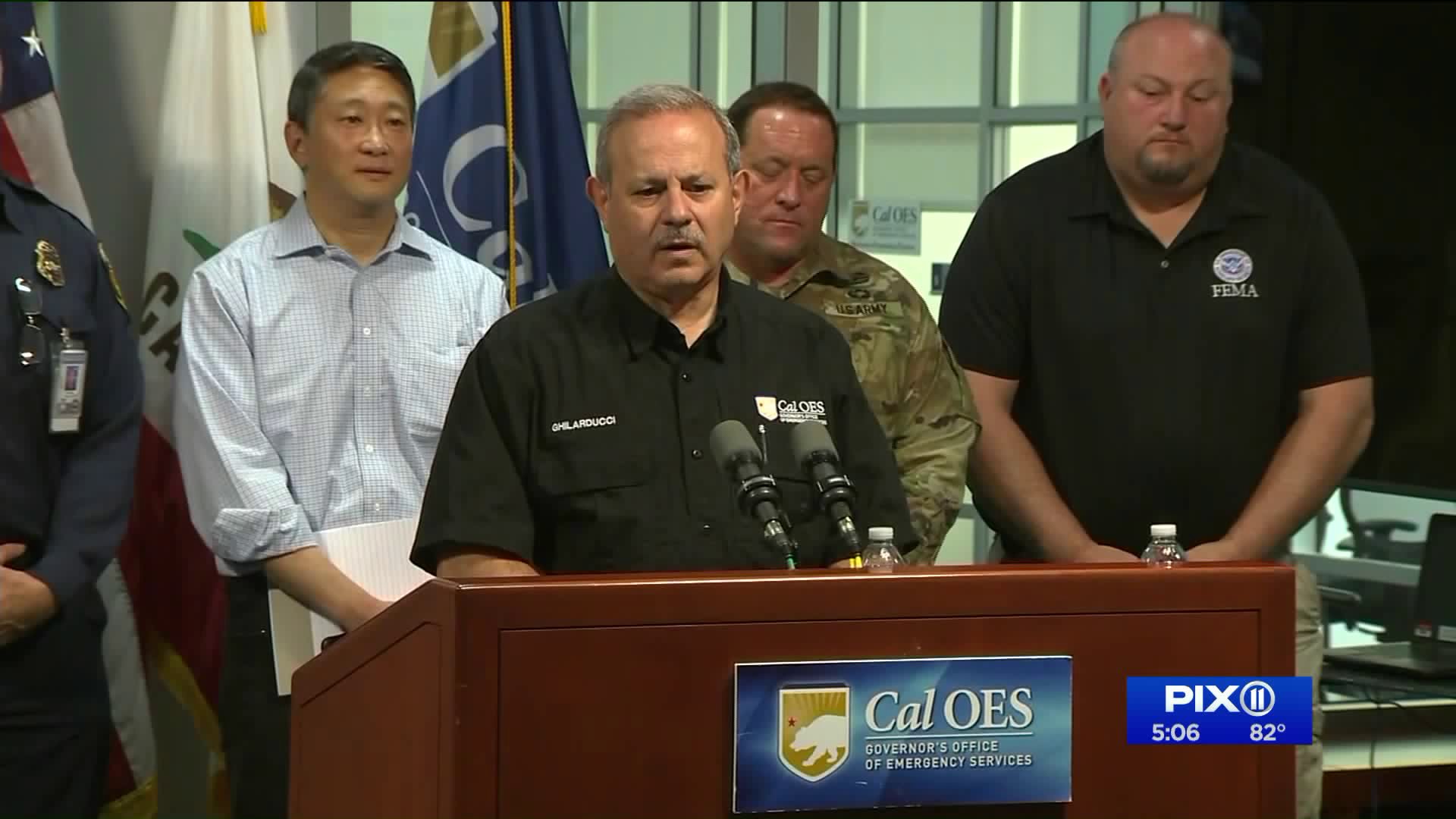 And the threat of another strong earthquake continues. Magee Hickey reports.

CALIFORNIA — A quake with a magnitude of 7.1 jolted much of California, cracking buildings, setting fires, breaking roads and causing several injuries while seismologists warned that large aftershocks were expected to continue for days, if not weeks.

The Friday night quake — preceded by Thursday's 6.4-magnitude temblor in the Mojave Desert — was the largest Southern California quake in at least 20 years and was followed by a series of large and small aftershocks, including a few above magnitude 5.0.

There is about a 1-in-10 chance that another 7.0 quake could hit within the next week, said Lucy Jones, a seismologist at the California Institute of Technology and a former science adviser at the U.S. Geological Survey.

The chance of a 5.0-magnitude quake "is approaching certainty," she added.

Aftershocks from the new main quake could occur for years, Jones said.

However, the quake was unlikely to affect fault lines outside of the area, she said, noting that the gigantic San Andreas Fault was far away.

The quake struck at 8:19 p.m. and was centered 11 miles from Ridgecrest in the same areas where the previous quake hit.

"These earthquakes are related," Jones said, adding that the new quake probably ruptured along about 25 miles of fault line and was part of a continuing sequence.

Gov. Gavin Newsom activated the state Office of Emergency Services operations center "to its highest level" and announced he had requested that President Donald Trump issue an emergency declaration so the state could receive federal aid.

The quake was felt as far north as Sacramento, as far east as Las Vegas and as far south as Mexico.

The area in and around Ridgecrest, already trying to recover from the previous temblor, took the brunt of damage. Several thousand people were without power, and there were reports of cracked buildings.

"There are significant reports of structure fires, mostly as a result of gas leaks or gas line breaks throughout the city" and daybreak Saturday could show even more serious damage, said Mark Ghilarducci, director of California Office of Emergency Services.

Local fire and police officials said they were initially swamped by calls for medical and ambulance service. But there was "nothing but minor injuries such as cuts and bruises, by the grace of God," Ridgecrest Police Chief Jed McLaughlin said.

Two building fires — one involving a mobile home — were quickly doused, and there were several reports of natural gas leaks, but the lines were shut off, McLaughlin said.

"I would probably start taking some stuff off the walls if they're not already down," McLaughlin said Saturday morning. "Make sure you're not sleeping under something that's still hung up."

The chief warned residents to stay prepared and load up on supplies while stores are still open, "just in case that we have something bigger than we had today."

He said residents should remain vigilant for the next two weeks.

"This isn't going to stop in the near future," he said. "The aftershocks, they haven't slowed down since the 7.1 (magnitude earthquake). For a period of time there was constant vibration."

"It's fairly frequent, especially since the big one hit this evening it feels like a tiny little earthquake," Weston said. "Everybody's on edge obviously because as soon as you feel that little rumble... of course we're all wondering is this another big one."

Weston said she was driving with her mom when the earthquake hit Friday, and "the car just kind of bounces up and down."

"In my experience, (it's) the least scary place to be. It's way scarier when you feel the floor kind of like pulling out from under you and you wonder what's going to fall on your head," she said.

For the second time in as many days, Ridgecrest Regional Hospital wheeled patients out of the building, some still hooked to IVs, CNN reported.

Nearby, the tiny town of Trona, with about 2,000 residents, was reported to have at least one collapsed building. Roads were buckled or blocked, and police put out a call for bottled water for residents.

State Route 178 in Kern County was closed by a rockslide and had severe cracking.

Several homes were knocked off their foundations. Buildings were cracked, but there were only minor injuries, authorities said.

In downtown Los Angeles, 150 miles away, offices in skyscrapers rolled and rocked for at least 30 seconds.

Andrew Lippman, who lives in suburban South Pasadena, was sitting outside and reading the paper when Friday's quake hit and calculated it lasted 45 seconds.

"I could see power lines swaying," he said.

An NBA Summer League game in Las Vegas was stopped after the quake. Speakers over the court at the Thomas & Mack Center continued swaying more than 10 minutes after the quake.

In Los Angeles, the quake rattled Dodger Stadium in the fourth inning of the team's game against the San Diego Padres. But the game went on, and the Padres won, 3-2.

"Not many people can say they threw a strike during an earthquake," Eric Lauer, who was on the mound at the time, said later. "My ball, my pitch, started an earthquake."

"Everyone was jumping over us to leave," said Daniel Earle, 52, of Playa del Rey, who was sitting with his wife in the stadium's reserve level. "My wife was holding us, like squeezing. I'm surprised my arm is still here."

Earlier Friday, Los Angeles had revealed plans to lower slightly the threshold for public alerts from its earthquake early warning app. But officials said the change was in the works before the Thursday quake, which gave scientists at the California Institute of Technology's seismology lab 48 seconds of warning but did not trigger a public notification.

"Our goal is to alert people who might experience potentially damaging shaking, not just feel the shaking," said Robert de Groot, a spokesman for the USGS's ShakeAlert system, which is being developed for California, Oregon and Washington.

The West Coast ShakeAlert system has provided non-public earthquake notifications on a daily basis to many test users, including emergency agencies, industries, transportation systems and schools.

Construction of a network of seismic-monitoring stations for the West Coast is just over half complete, with most coverage in Southern California, San Francisco Bay Area and the Seattle-Tacoma area. Eventually, the system will send out alerts over the same system used for Amber Alerts to defined areas that are expected to be affected by a quake, de Groot said.

California is partnering with the federal government to build the statewide earthquake warning system, with the goal of turning it on by June 2021. The state has already spent at least $25 million building it, including installing hundreds of seismic stations throughout the state.

This year, Newsom said the state needed $16.3 million to finish the project, which included money for stations to monitor seismic activity, plus nearly $7 million for "outreach and education." The state Legislature approved the funding last month, and Newsom signed it into law.