K-Pop is huge and growing, and KCON2019 shows NYC is a force in the pop cultural wave 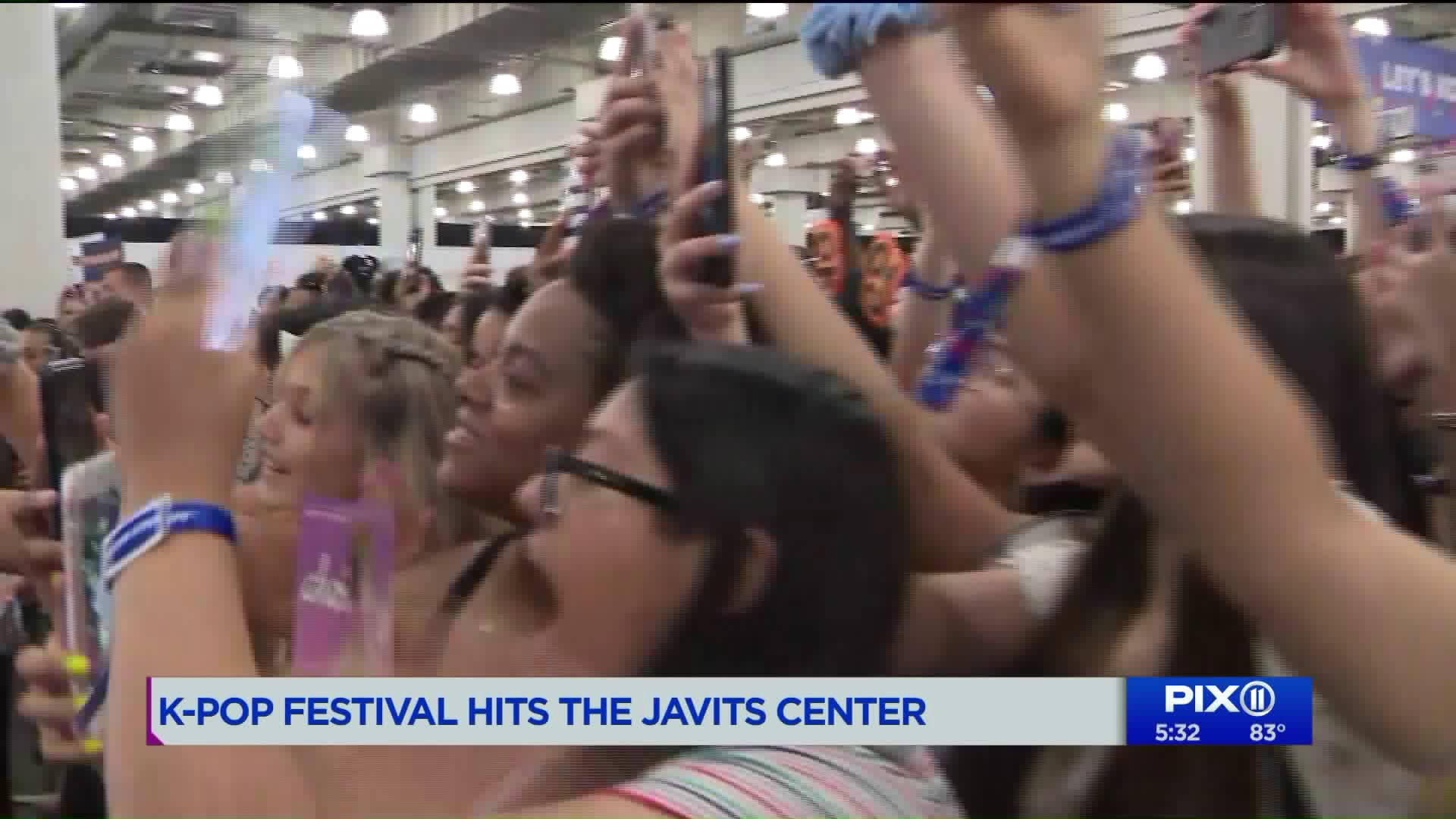 PIX11`s K-pop beat reporter James Ford happily has all the details from the convention, celebrating a phenomenon that`s gotten red hot here in the U.S. 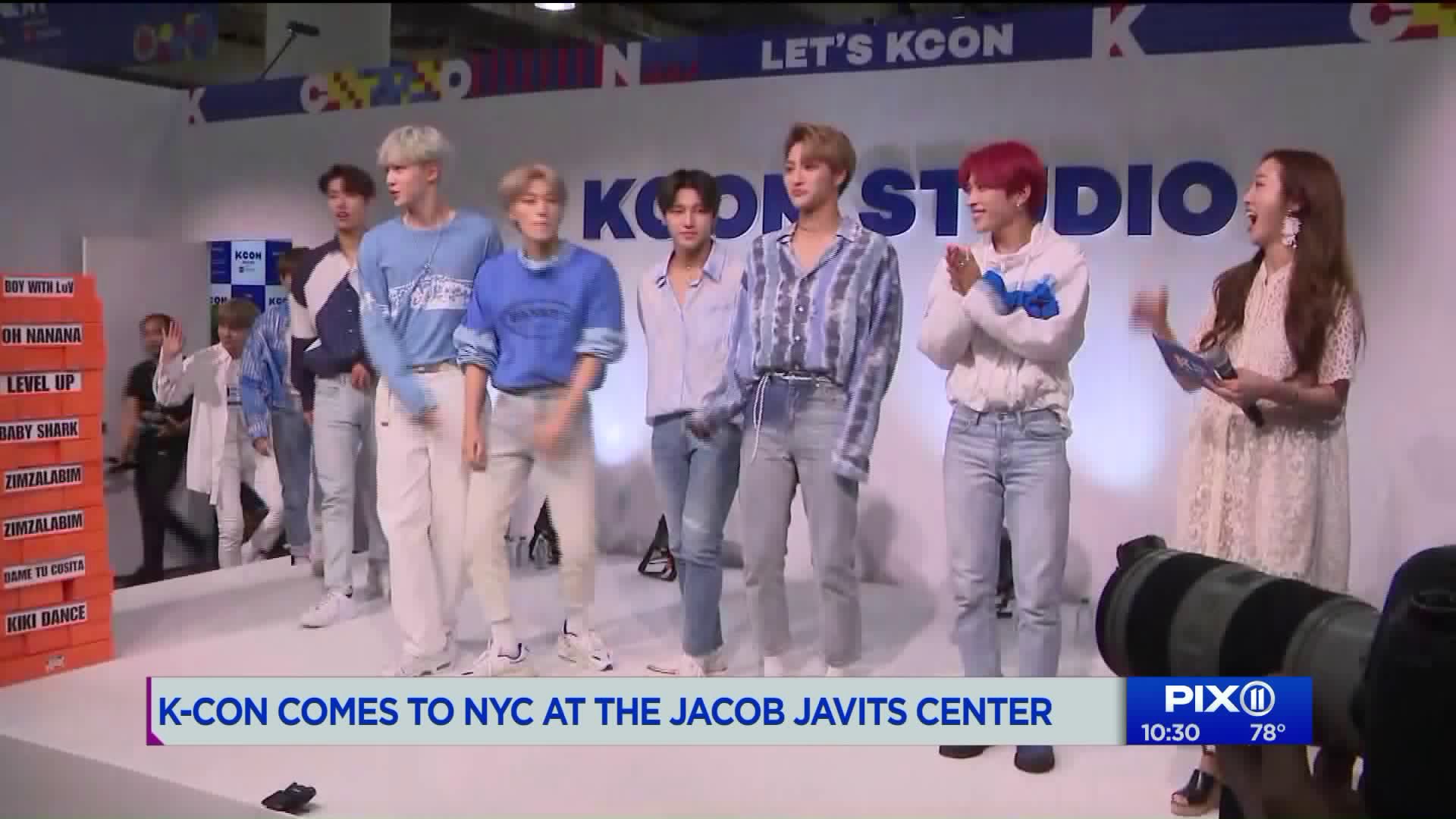 FAR WEST SIDE, Manhattan — K-Pop — Korean popular music and culture — has become a phenomenon here in the U.S., and in New York in particular, as evidenced by sold out shows by Korean supergroup BTS at MetLife Stadium in the last year, as well as the heartthrobs' appearances on SNL and The Late Show With Stephen Colbert. However, the greatest sign of K-Pop's dominance is evident at New York's two largest indoor venues on Saturday and Sunday.

The Jacob Javits Convention Center and Madison Square Garden are home to KCON 2019 New York. It's the largest event of Korean popular culture outside of South Korea itself.

Official attendance numbers will not be known until after the convention finishes Sunday night, but a clear indicator of the wide-ranging scope of the event is that people came from far and wide.

A quick, random sampling of about 20 convention goers showed people from Nebraska, Israel, New Hampshire, Wisconsin, Massachusetts, and, of course, the tri-State.

The reason people had come so far was summed up in a comment from K-Pop fan Teresa Memole, who'd come from Albany to KCON.

"I'm so happy!" she shouted. "They were right there in front of me!"

She was referring to K-Pop sensation The Boyz, who appeared on one of the stages set up in the spacious Javits Center exhibition area, just feet away from a throng of hundreds of fans.

Access like that to significant names in K-pop, like ATEEZ, the eight-member boy band who ran through the screaming crowd on their way to the KCON broadcast studio, is why people pay admission that ranges from mid-double digits to as high as $1,500.

"It's totally worth it," a fan from New Haven, Connecticut told PIX11 News.

Another fan, Osher Aziv, from Haifa, Israel, was in shock over what she was able to do at the convention.

"I can't believe I actually just saw him, even hugged him," she said, breathlessly, referring to a meet-and-greet she'd attended Saturday afternoon. It was a one-on-one encounter with Korean comedy artist Big Marvel.

By reproducing many K-Pop hits with unorthodox instruments, like a rubber chicken and other children’s toys, Marvel has become a YouTube megastar. It's why fans were in awe of being in close proximity to him, as well as so many other artists.

Marvel himself told PIX11 News, in an interview, that he was pleasantly surprised at the whole thing.

Many of the songs that Marvel has re-done as tributes with strange instruments on YouTube were played at one of the most popular venues on the convention floor: a dance area, where fans could replicate the dance moves they've seen their favorite idols do in music videos.

"We get to come together," said Kyrese Estwich, a dancing fan from New York, "and we all get to showcase our skills and talents that we worked on."

Even though the main draw of the convention is the musical acts, KCON also has extensive sessions on Korean fashion, art and animation, and a variety of other aspects of Korean culture, the most extensive being food. From crispy taro root to sliders made of mealworms, the food was varied and plentiful.

"You've got to put yourself into the culture," said fan Maria Charcape, "learn about everything. That's basically what this place is, to be open-minded."

The evening was capped off by a concert at MSG, with all of the bands and acts that had been on hand during the day performing some of their hits. ATEEZ, The Boyz, Kevin Woo, TXT, and IZ*One thrilled their fans on a stage that was intimate, relative to the cavernous space of the World's Most Famous Arena.

KCON 2019 NY runs through Sunday night at both the Jacob Javits Center and Madison Square Garden.