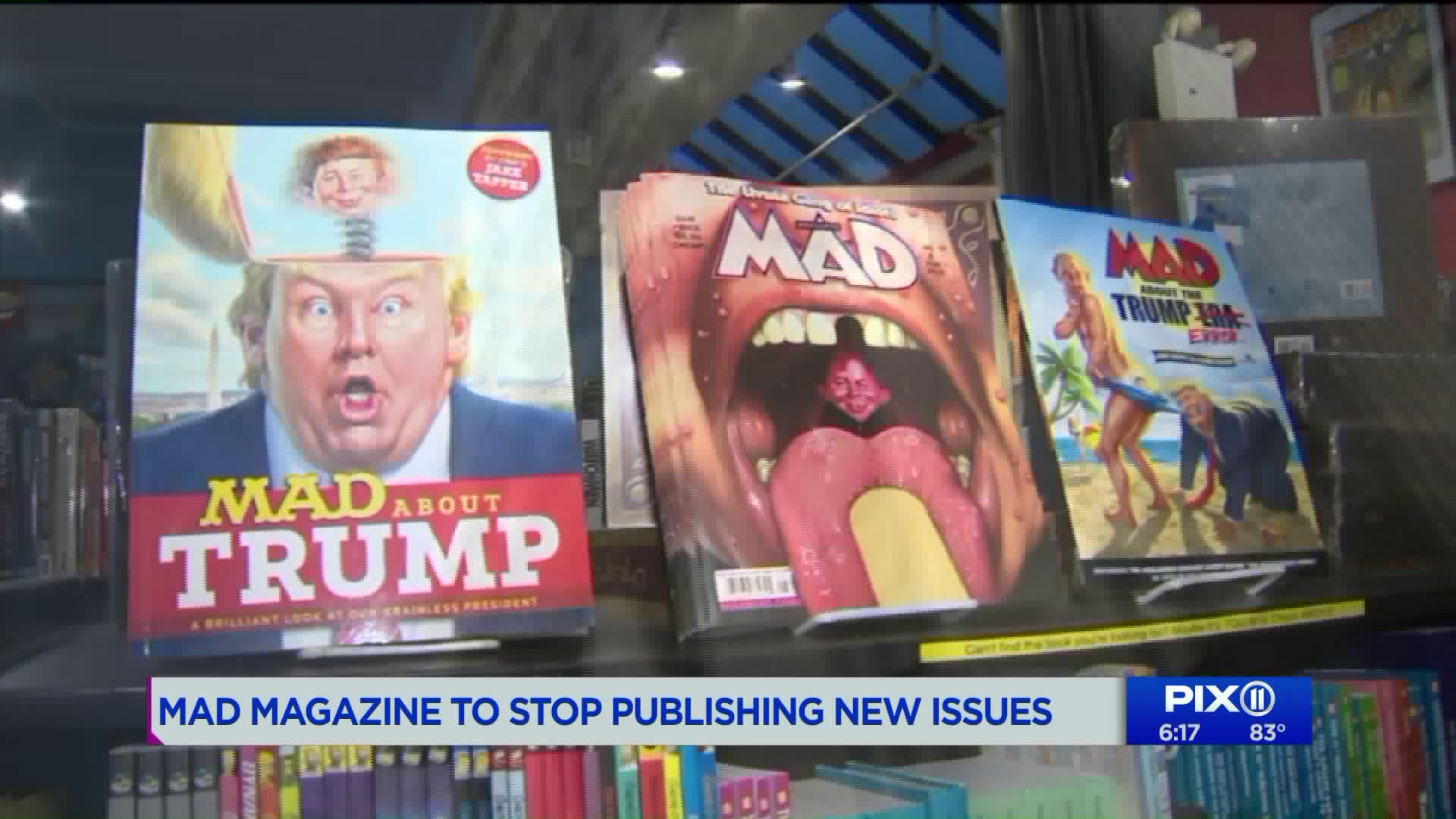 It`s been a major force in popular culture and the origin of most American comedy for the better part of the last century. Now, an institution that for most of its life was based in New York is ceasing to exist as it`s been known for most of its long life. Mad Magazine in its current form is ending, but it`s not going completely away. Still, the new major change to the storied publication has many people lamenting the end of a cultural force.

SOHO — It's been a major force in popular culture and the origin of most American comedy for the better part of the last century.

Now, an institution that for most of its life was based in New York is ceasing to exist as it's been known for most of its long life. Mad Magazine in its current form is ending, but it's not going completely away. Still, the new major change to the storied publication has many people lamenting the end of a cultural force.

Mad began in 1952 as a simple, cheeky comic book that quickly became the most widely read, and widely referenced, source of irreverent satire for generations.

On Thursday, as word spread that it was ending its publication of new and original material, fans from around the world started posting tributes, and described the magazine's demise as devastating.

Yankovic, who helmed one issue of the magazine recently as guest editor, wrote, "I am profoundly sad to hear that after 67 years, MAD Magazine is ceasing publication. I can't begin to describe the impact it had on me as a young kid -- it's pretty much the reason I turned out weird."

Jeff Ayers, general manager of Forbidden Planet, one of the world's most revered comics stores, summed up the magazine's influence.

"Mad Magazine has always been this bastion, this stalwart of just biting cultural satire," said Ayers, who has spent many days over the years at two of Mad's three headquarters, all in Manhattan. One was famously at 458 MADison Avenue, as the publication used to point out. From there, it moved to its parent DC Entertainment's Headquarters, at 1700 Broadway, where Mad had its own floor, across the street from the Late Show with Stephen Colbert.

Colbert has, in the past, made tributes to Mad himself.

It's a publication that has garnered much respect and praise, from a wide variety of sources.

"We do sell a lot of this magazine," said Syed Khalid Wasim, manager of Casa Magazines in the West Village. "It's [a] very good magazine, and people love it. "

His shop, however, which carries hundreds of hard to find titles, from Bible Study magazine to National Geographic Kids, is exceptional. Few newsstands or shops carry the magazine anymore.

"We did, at a point," said the manager of Smoke Scene, a smoke supply store and newsstand in Midtown. "But then, you know," he continued, "it just stopped being popular."

That observation -- declining popularity -- may be the biggest reason why Mad Magazine is bringing new, published material to an end,

"I had to Google it," Buttigieg said, in response. "I guess it's a generational thing."

Indeed, for many people, like the South Bend mayor, who are under 40 (he's 37), Mad Magazine's time may have passed.

Also, as a customer at yet another shop that used to sell the magazine pointed out, some other things have changed.

"You can actually read the same thing that you could buy... at the store on your phone, on the internet," said Maria Terrero. "Everything's turning electronic."

DC Entertainment, which moved all of its publishing operations, including Mad Magazine, from New York to Los Angeles about a year ago, made the magazine's changing status official in a statement on Thursday.

"After issue #10 this fall," said the company, "there will no longer be new content ― except for the end-of-year specials which will always be all new. So starting with issue #11 the magazine will feature classic, best-of and nostalgic content from the last 67 years."