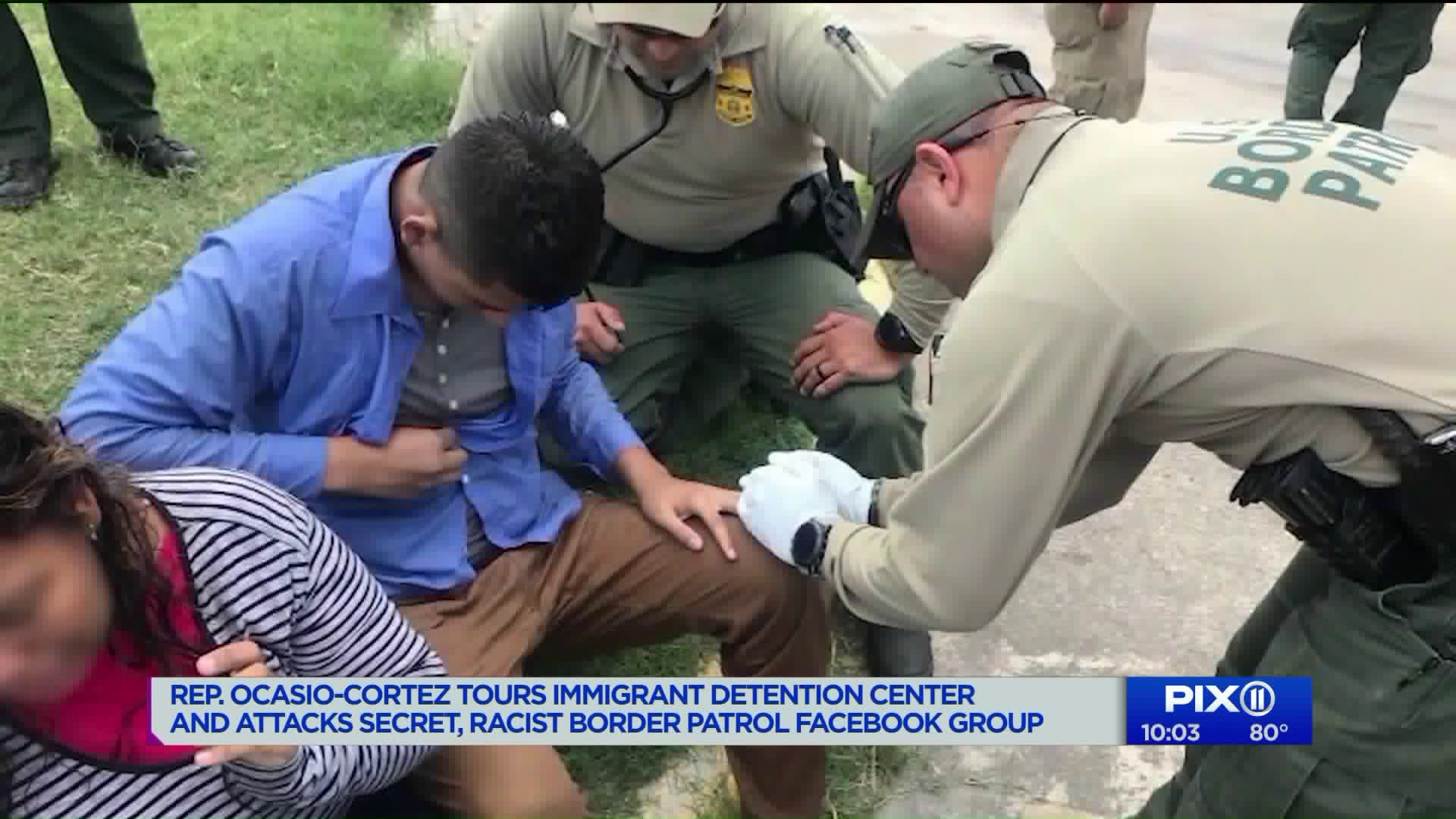 Democratic members of Congress decried the treatment of detained immigrants in border detention facilities following a tour of one such building here that has come under scrutiny following reports of squalid conditions. In a series of tweets, Democratic Rep. Alexandria Ocasio-Cortez said after touring a separate facility earlier in the day, "People (are) drinking out of toilets, officers laughing in front of members Congress."

Democratic members of Congress decried the treatment of detained immigrants in border detention facilities following a tour of one such building here that has come under scrutiny following reports of squalid conditions.

In a series of tweets, Democratic Rep. Alexandria Ocasio-Cortez said after touring a separate facility earlier in the day, "People (are) drinking out of toilets, officers laughing in front of members Congress."

"I brought it up to their superiors," she said in one tweet. "They said 'officers are under stress & act out sometimes.' No accountability.

Ocasio-Cortez said in an interview with CNN that she did not feel safe.

"In the last facility, I was not safe from the officers," she told CNN's Natasha Chen on her way into the Clint facility. Ocasio-Cortez grew frustrated during his tours. She screamed at Border Patrol agents for trying to take selfies with her before she toured one facility, according to her spokesman Corbin Trent.

The lawmakers' visit came on the heels of the passage of a $4.6 billion border funding bill to assist with the crush of migrants arriving at the US-Mexico border, and amid government and media reports detailing worsening conditions at border facilities.

Lawmakers congregated in front of the beige facility Monday afternoon and decried the conditions, as protestors chanted over them. Chairman Joaquin Castro, flanked by his colleagues, said, "The system is still broken." Posters saying #Free the Children and "Humanitarian Aid Is Never a Crime Drop the Charges" floated overhead.

"It's not just about money, it's also about the standards of care," Castro told CNN. "We're going to have put a hell of a lot of pressure on the Trump administration, through appropriations, through investigations, to get them to change what they're doing."

In an interview with CNN, Rep. Nanette Diaz Barragán expressed frustration about not getting sufficient answers from officials. "We're not getting any answers on some of the programming, like (Migrant Protection Protocols)," she said. The MPP policy requires that some asylum seekers wait in Mexico for the duration of their immigration hearings.

Democratic Rep. Madeleine Dean of Pennsylvania tweeted "conditions are far worse than we ever could have imagined" and that "this is a human rights crisis."

"(Fifteen) women in their 50s- 60s sleeping in a small concrete cell, no running water. Weeks without showers. All of them separated from their families," Dean wrote on Twitter.

Allegations of poor health and hygiene at multiple US Customs and Border Protection facilities in Texas, including the one in Clint, sparked a national outcry last month earlier this month. A team of lawyers, doctors and advocates described circumstances in which children said they didn't have access to soap and had few opportunities to shower.

Over the weekend, a federal judge ordered CBP to permit health experts into detention facilities holding migrant children to ensure they're "safe and sanitary" and assess the children's medical needs. The order encompasses all facilities in the CBP's El Paso and Rio Grande Valley sectors, which are the subject of a lawsuit.

During Monday's tours, a report by the investigative reporting group ProPublica revealed a closed Facebook group for current and former Border Patrol agents that reportedly features jokes about migrant deaths, derogatory comments about Latina lawmakers and a lewd meme involving at least one of them. CBP officials said they are investigating "disturbing social media activity." CNN has not been able to independently access and review the Facebook group posts in question.

The posts were "hosted on a private Facebook group that may include a number of CBP employees," according to Matthew Klein, assistant commissioner of CBP's Office of Professional Responsibility.

Before the lawmakers' visit to Clint on Monday, protestors and counter-protestors lingered around the entrance, some donning Trump swag -- at times getting into heated exchanges over immigration.

Victoria O'Connell Curran traveled from Alaska on Saturday to visit the facility. She held an orange sign that read "Close the Camps." "For some reason, it really hit," she said, recalling when she visited the Tornillo influx facility in Texas last year.

Amy Bailon, an El Paso resident, came to the facility with her sister and brother-in-law. "We're against what they're doing with the children," she said. "We need to lend a hand."

Over recent months, the Department of Homeland Security has warned of facilities overwhelmed by the sheer volume of migrant arrivals, eventually provoking the request for additional funds that was passed last week.

Acting Homeland Security Secretary Kevin McAleenan reiterated last Friday that he has warned of overcrowding in border facilities for months, but also pushed back strongly on what he termed "unsubstantiated" reports about the Clint facility where he says children are receiving supplies such as blankets and toothbrushes, despite claims to the contrary.

The situation at the border recently took on added urgency when a photo of a father and daughter who drowned trying to cross the Rio Grande into the US went viral. Texas Democratic Rep. Veronica Escobar, who was part of Monday's delegation, became emotional on the House floor as she talked about the photo late last week.

"The United States needs to see what's happening. Americans need to see what is happening," Escobar told CNN Monday, referring to the tragic images that have surfaced.

CNN and other media outlets toured the Clint facility last Wednesday but were barred from taking any pictures or video.

The facility, which is meant to hold 106 people, was holding 117 migrant youths, CBP officials said at the time. The youngest children in the facility were a 1-year-old, who has been traveling with a 17-year-old and a 2-year-old unaccompanied minor.

Most of the children were being kept inside rooms with metal doors, a large glass window and no windows to the outside. Some were sleeping or lying on orange coats and blue mattresses on the floor. Some girls were passing the time braiding one another's hair and a group of boys were playing soccer.

A teen girl was quarantined in a separate cell, where a sign posted outside indicated that she may have the flu. CBP agents said children in the facility have been treated for chicken pox, rabies, lice and scarlet fever.

Reporters were taken to a galley area with pallets of food, including cups of noodles and drinks. They were also shown a storage area with boxes of toothbrushes, toothpaste and clothing. They also spotted a group of five children playing soccer.

The children are allowed to shower every two days in a trailer equipped with shower stalls, CBP agents said.

While CNN was told by a CBP official at the Clint facility the environment was the same on Wednesday as it was last week when legal monitors visited, a CBP source with firsthand knowledge of the facility said, "Typical. The agency prepped for you guys." The source added, "It's a never-ending cat and mouse game."

In May, the DHS inspector general found "dangerous overcrowding," and unsanitary conditions at an El Paso, Texas, Border Patrol processing facility following an unannounced inspection, according to a report.

The IG described "standing room only conditions" at the El Paso Del Norte Processing Center, which has a maximum capacity of 125 migrants. On May 7 and 8, logs indicated that there were "approximately 750 and 900 detainees, respectively."

"We also observed detainees standing on toilets in the cells to make room and gain breathing space, thus limiting access to the toilets," the report, which was first obtained by CNN, states.

"(Customs and Border Protection) was struggling to maintain hygienic conditions in the holding cells. With limited access to showers and clean clothing, detainees were wearing soiled clothing for days or weeks," the report states.

In its response to the inspector general, DHS said that it "has implemented a multi-layered approach" that includes the construction of additional structures to house migrants, continued coordination with Immigration and Customs Enforcement and providing staff support.

The agency has constructed a soft-sided structure at El Paso Station that can hold 500 and has been operational since May 2, the response reads. The agency also plans to build additional structures, including an "800 holding capacity modular facility" at El Paso Station by July 31 and a permanent centralized processing center for approximately 1,800 people.

A drop in apprehensions

As the hot summer months get underway, apprehensions are dipping, as is common this time of year, though officials attribute the drop to a coordinated effort between the US and Mexico.

Last month, the United States and Mexico signed onto a joint declaration after President Donald Trump threatened to impose tariffs on Mexico if it didn't bolster immigration enforcement. The declaration included, in part, increased enforcement at Mexico's southern border.

McAleenan said last Friday that it appears there will be a 25% decrease in June in numbers of migrants crossing at the US-Mexico border.

More than 144,000 migrants had been encountered or arrested at the US-Mexico border in May, the highest monthly total in 13 years.

McAleenan credited Trump administration initiatives, especially the increase in interdictions by Mexico over the past three weeks and the return of some asylum seekers to Mexico for the duration of their immigration proceeds, a program McAleenan says is being expanded.

That program, however, is being fought in court, including by a union representing asylum officers which opposes the initiative.

McAleenan said that he expects to be able to tell by late July if these initiatives will have a sustained impact.