How the NYPD will keep Pride, the largest NYC public event ever, safe 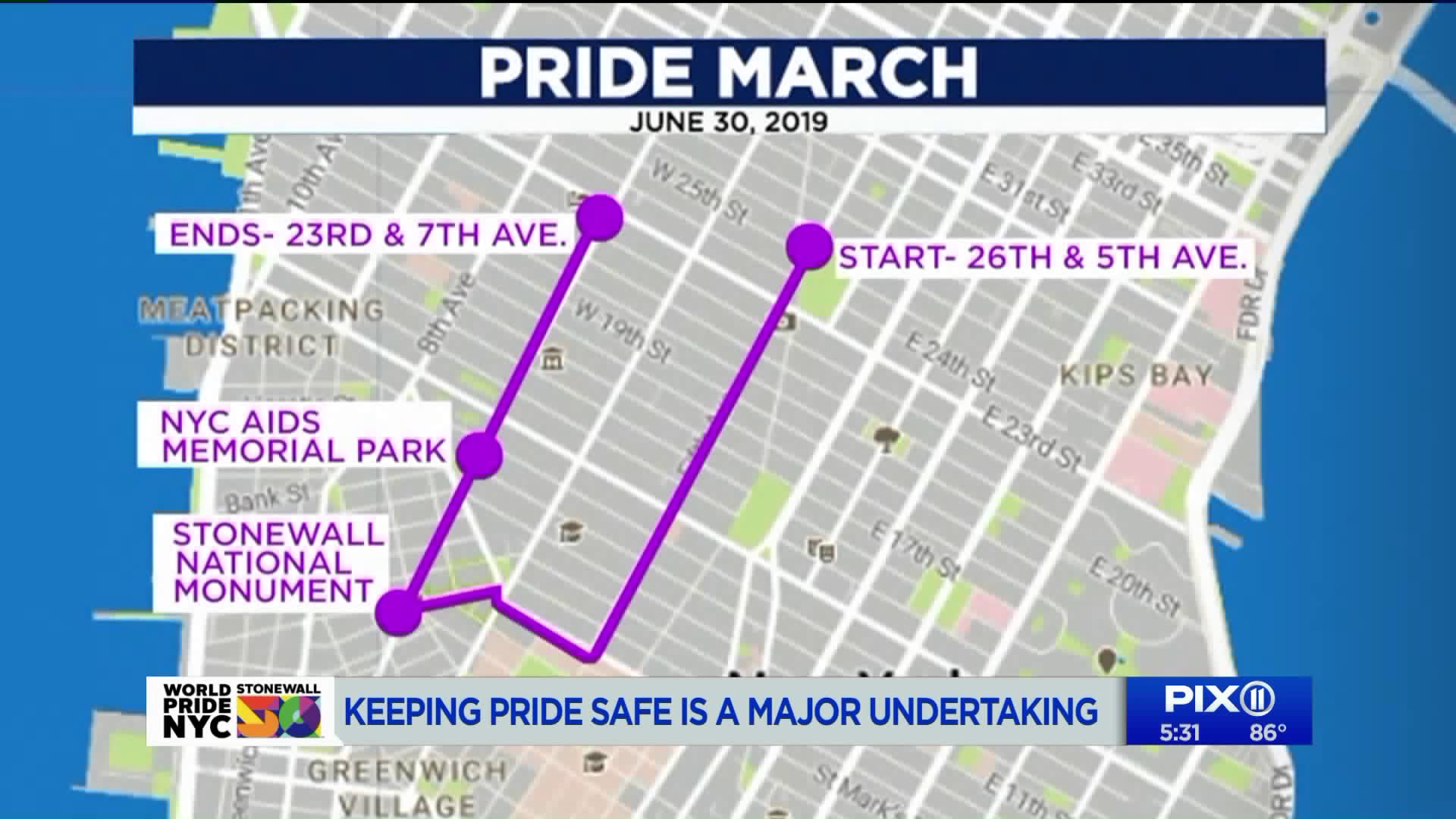 For the first time, the parade route is U-shaped. That`s not only because this year`s march -- the culmination of World Pride -- will be twice as large as usual, but it`s also due to security.

GREENWICH VILLAGE — The 2019 Pride March on Sunday is on course to be the largest parade in New York City history.

With an expected turnout of 4 million people, the crowd will be almost four times as large as the number of revelers in Times Square on New Year's Eve. Keeping that many people safe is a monumental task. However, said NYPD Chief James Waters, " the New York Police Department is very capable of protecting large events."

Waters, a three-star chief, is the highest ranking NYPD commander in counterintelligence. In that capacity, he and his immediate boss, Deputy Commissioner for Intelligence and Counterterrorism John Miller, oversee all of the efforts of the country's largest police department to discover and to counter potential threats, particularly at high-profile, high-risk events, like Pride.

The NYPD's own statistics show that hate crimes in New York City are up 64 percent overall year-to-year, and up 45 percent for the same period against LGBTQ New Yorkers. It's why the chief, who was named Ally of the Year by the NYPD's Gay Officers Action League this year, said he has to approach events like Pride with at least one thing in mind.

"LGBTQ events have the potential to be a high threat environment," he told PIX11 News in a one-on-one interview on Friday. "There's no credible threat," he assured, "but we're prepared nonetheless."

Today is the NYC Pride March. There will multiple street closures in effect. Please plan accordingly using this map of the route. #WorldPride2019 #Pride pic.twitter.com/M8eRYuZUXv

The interview was conducted in front of the Stonewall Inn, the West Village bar where the Pride Movement began during an uprising by LGBTQ New Yorkers against NYPD officers exactly 50 years ago.

The chief pointed out a variety of security measures that were in place for a concert and rally outside of the Stonewall Inn on Friday which will be deployed on a much larger scale for Sunday's Pride March.

He mentioned the Critical Response team, one of three divisions of NYPD specialists trained in the use of automatic weapons, and methods for handling mass shooting emergencies.

He also pointed out that Friday's concert venue had gated access only, through a barricade and entry system set up by the NYPD. Only people with tickets for the event were allowed entry, so that officers on assignment could know exactly who was coming and going.

Part of what kept the perimeter of the event secure was a ring of vehicles, in addition to metal barriers. Some of the vehicles were heavy. Very heavy.

"These sand trucks," Waters said, gesturing to a series of 26-ton NYPD dump trucks filled with sand, "and other police cars are being used as blocker vehicles to lock down the entire venue."

He also pointed out one other security element that may work differently than some might assume. Explosives dogs that are K-9 officers for the department were trained in Miami-Date to be highly sensitive.

As PIX11's cameras rolled, one dog, a black Labrador, kept walking behind unsuspecting attendees at the event, sniffing for trace elements of explosives. Each dog is capable, the chief said, of detecting explosives residue on individuals or on groups of hundreds of people.

"They have the ability to detect an odor of explosives at a distance of up to 100 yards," said Waters. In other words, just one of the dogs can smell explosives residue on one person in a crowd of hundreds, even if the dog is a football field-length away. There will be dozens of K-9 officers deployed at Sunday's march.

"We needed an area to disperse the floats," Chief Waters said, adding that the NYPD worked with the parade organizers to map out a way to most securely handle traffic, crowds, and parade participants. "We had to have a place to put those floats and marchers at the end of the parade," he said.

He also mentioned that on Sunday, just like Friday and Saturday, he'd be on hand personally, in addition to the thousands of officers under his command.

"I'll be out all day," Chief Waters said. His gauge for how well his efforts will have worked, he said, is relatively simple. "What's success," he told PIX11 News, is that after the march, and a subsequent closing ceremony in Times Square, "everybody goes home happy."

The Pride March steps off on Sunday at noon, from Madison Square, on Fifth Avenue, at 26th Street.