What Joe Biden, Bernie Sanders and other Democrats need to do in Thursday night’s presidential debate 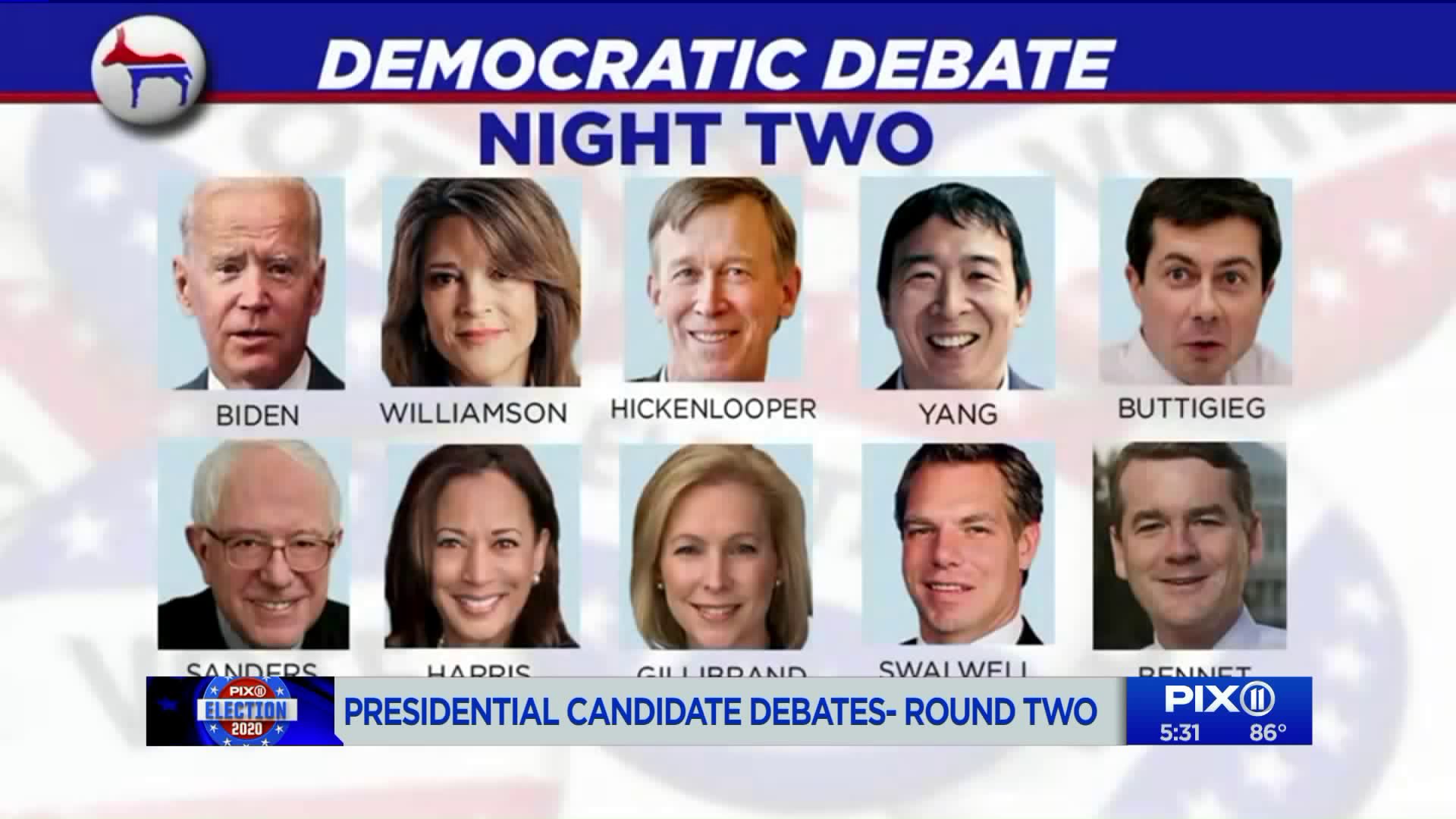 The second 10 candidates face each other and the nation Thursday night in a prime-time confrontation sure to underscore differences along lines of race, gender, generation and ideology that are starting to shape the party`s winding search for a nominee to take on President Donald Trump.

There is potential for fireworks in exchanges between Biden, a front-runner seeking to stay above the fray and keep his focus on President Donald Trump, and Sanders, who is eager to draw contrasts with the more moderate former vice president over which issues and which approach -- Biden's wish for a return to "normalcy" vs. Sanders' promise of a "political revolution" -- will drive the Democratic Party.

But lesser-known, lower-polling candidates looking for breakout moments of their own could use the two septuagenarians as piñatas, as well.

Biden went unmentioned on Wednesday night , as a bevy of low-polling candidates vied for breakout moments while Massachusetts Sen. Elizabeth Warren's policy position steered the early part of the debate. The most heated exchanges among the group of candidates who went first came over health care and immigration.

Here's a guide to what the candidates could seek to accomplish tonight:

At center stage is the Democratic front-runner in national and early-state polls. Biden has focused on proving he can take on Trump , emphasizing his campaign's belief that voters are looking for the most electable candidate. And unlike many of those who will be on stage Thursday night, Biden doesn't have to introduce himself to voters -- he's already universally known after eight years as former President Barack Obama's vice president.

But that effort to stay above the fray and out of intra-party divisions -- as well as his decision not to take questions publicly at most campaign events -- means he hasn't yet shown he is prepared for the sort of onslaught from progressives that could await the former vice president in the debates.

An important dynamic the first two months of Biden's campaign have revealed is his simmering anger over the criticism he's faced to date. He's joked about having permission to hug women after being accused of groping; he lashed out at New Jersey Sen. Cory Booker when Booker first called on Biden to apologize for his comments about "civility" with segregationist senators; when a reporter pressed him on why he'd reversed his position on the Hyde Amendment within 36 hours, Biden shot back, "don't be a wise guy with me."

It's raised questions about how Biden will handle being a punching bag -- if that's what his Democratic opponents decide to make him -- on the debate stage as he tries to stay above the fray.

It's clear that Sanders is eager to differentiate himself from Biden. What's less clear is how he will handle other moderates -- including the two candidates from Colorado -- who are likely to assail Sanders' own brand of progressivism, and others who are making generation-change arguments.

Because Warren is on Wednesday night's stage instead of Thursday's, the battle for the progressive wing of the party will have to wait. The challenge for Sanders on Thursday night is to stay on offense and demonstrate that his ideas are the party's future, rather than finding himself on defense, fending off several foes at once.

The executive of Indiana's fourth-largest city arrives on the heels of controversy over the police shooting of a black man in his city, and the politics around how he handles it moving forward could be more important to his long-term viability than Thursday night's debate.

Buttigieg has leaned into a message of generational change, and he's positioned just to viewers' left of two septuagenarians in Biden and Sanders. That's the contrast he'll want viewers to hear -- and, perhaps more importantly, see.

It's easy for those who are closely following the Democratic race to forget that much of America is still only vaguely familiar with Harris, the former California attorney general whose prosecutorial history is at the center of her campaign, with her promises to "prosecute the case" against Trump and her "for the people" slogan.

Right now, polls have shown Biden as the overwhelming favorite of black voters, particularly in South Carolina, an early-primary state. Harris' style hasn't been to attack other Democrats frequently, and if she isn't engaging with other candidates, she'll need to find ways to make sure she isn't forgotten. But her performances on the Senate Judiciary Committee have led to expectations she will be a formidable presence, and her path to the nomination likely requires chipping away at Biden's support.

Along with her close friend New Jersey Sen. Cory Booker, Gillibrand is a big-state senator with fundraising prowess who hasn't yet managed to become a real factor in the 2020 race.

Abortion rights could be the issue Gillibrand uses to change that. She's built a political identity around supporting female candidates and advocating for women's rights -- including abortion rights and combating military sexual assault. She needs to find an opening for a breakout, and with Biden on defense over his Hyde Amendment reversal, that could be where Gillibrand pounces.

Biden might not punch Sanders back, but Bennet has shown a willingness to attack the Vermont senator. Bennet entered the race by saying on CNN that advocates for Medicare for All need to "level with the American people" and has shown no signs of letting up ahead of Thursday night's debate.

Bennet offers a brand of politics unlike others in the race: fiery centrism. He rails as much against Senate Majority Leader Mitch McConnell as he does against Trump. That approach could help him emerge from a pack of low-polling centrist candidates if Biden falters -- but several other little-known candidates in the race will be fighting for the same chance to emerge as a moderate alternative.

His political identity is pegged largely to his strident advocacy for gun control measures. He has called for a buy-back program for assault rifles that would put those who didn't sell back their automatic weapons in jail. That's the issue on which Swalwell could seek to differentiate himself from his opponents.

Swalwell has several go-to lines he leans on -- some of which elicit as many groans as they do cheers in person. One of his favorites: Calling the Democratic presidential field "the Avengers" compared to the GOP's "Hunger Games." If he uses them, it'll gauge whether the audience is willing to give candidates any credit for canned lines.

The self-help guru's stump speech paints a picture of a dark and dystopian country under Trump. She hasn't created any waves in the race so far and is almost certain to be ignored by other Democrats, giving Williamson an opening to explain to viewers why she's running -- and why, as a political novice, she should be taken seriously. Doing so could help her move ahead of the bottom half of the field, where candidates are registering next to no support in the polls.

One of the race's moderate voices, Hickenlooper has to prove he's better than the race's other low-polling candidates.

He's most likely to criticize Sanders, but Hickenlooper could be willing to take on anyone: He has laid blame for Democrats' move leftward on policy matters on the entire 2020 field of candidates, saying in a speech two weeks ago that the party's contenders have "not only failed to oppose Sen. Sanders' agenda, but they have actually pushed to embrace it."

His online cult following has rallied behind the entrepreneur who describes himself as the opposite of Trump: "an Asian guy who likes math." And he's shown irreverence, poking fun at Biden for missing a gathering in Iowa and then walking around a stage whipping supporters up like a professional wrestler while being introduced at South Carolina Rep. Jim Clyburn's fish fry this month.

Yang's online army will carry him deep into the Democratic race. His challenge is like Williamson's: In an election in which Democratic voters are desperate to defeat Trump and uneasy about nominating a political novice, he needs to demonstrate to the broader electorate why he should be taken seriously.