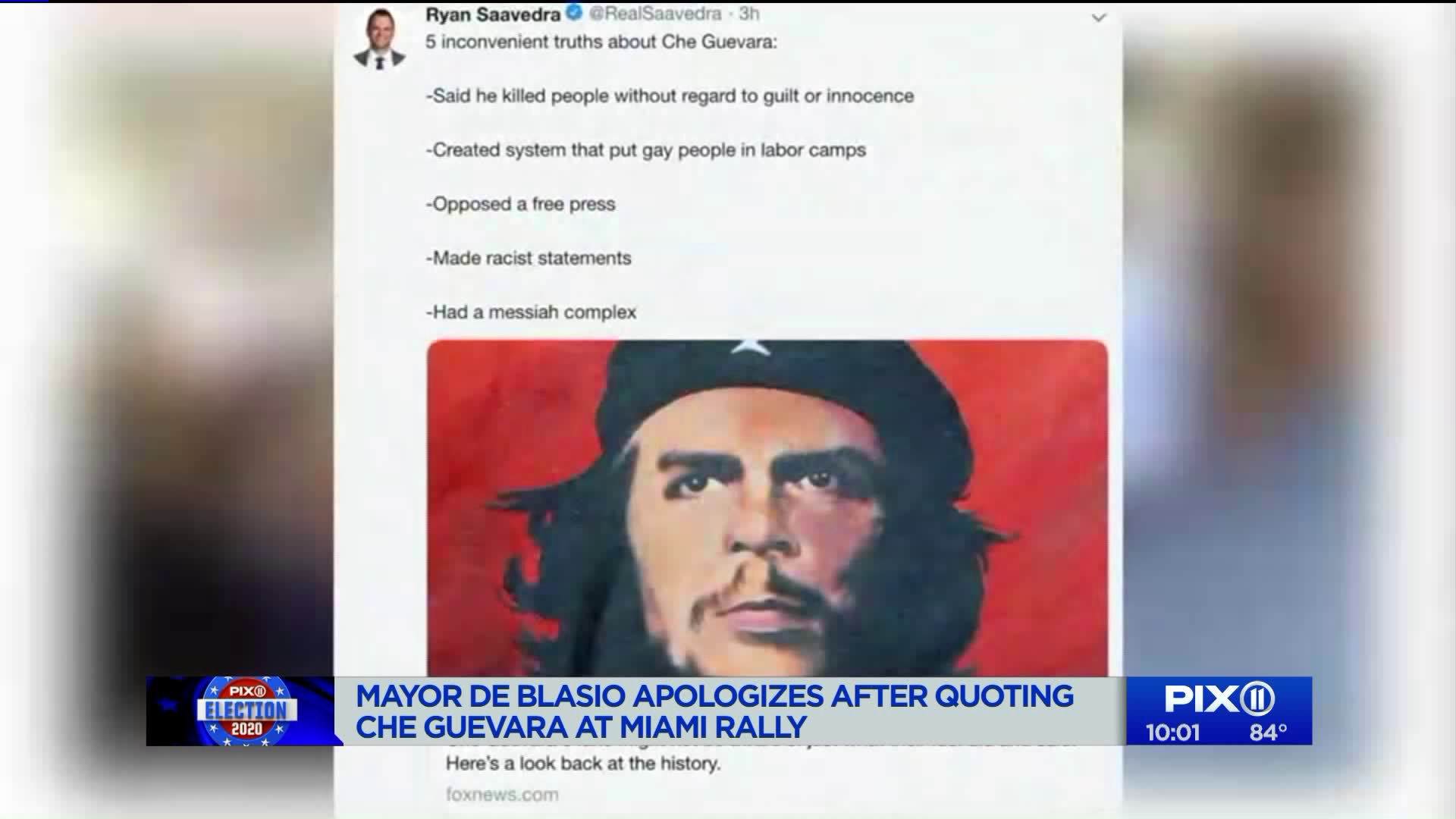 Fresh from his appearance late Wednesday in a Democratic debate in which candidates pointedly spoke Spanish to appeal to Hispanic voters, de Blasio went to Miami International Airport to join cargo workers in the heavily Hispanic city. They are striking over what they call appalling working conditions.

De Blasio said he would stand by the workers "every step of the way." He shouted "Hasta la Victoria, siempre!" __ or "Until victory, always" __ a phrase most associated with revolutionary leader Che Guevara. It also became a rallying cry for Castro.

He later tweeted about it.

"I did not know the phrase I used in Miami today was associated with Che Guevara & I did not mean to offend anyone who heard it that way. I certainly apologize for not understanding that history," he tweeted. "I only meant it as a literal message to the striking airport workers that I believed they would be victorious in their strike."

Florida state Sen. Annette Taddeo, a Democrat from Miami, delivered a sharp rebuke on Twitter saying she was "utterly disgusted."

"This is completely unacceptable! How can anyone wanting to be the leader of the free world quote a murderous guerrilla - in Miami no less!" Taddeo said. "A community filled with his victims! #DeleteYourCampaign."

U.S. Sen. Rick Scott, a Florida Republican, tweeted, "In case there was any doubt about the Democrats running for President embracing socialism, @BilldeBlasio is in Miami quoting...Che Guevara."

An aide to de Blasio, who was traveling, did not immediately return a call and text message seeking comment

Evelyn Perez-Verdia, a political strategist and commentator who advises politicians to connect with Hispanics, said de Blasio's comment highlights the importance of having Latin America advisers.

"It is key to have individuals know what is being quoted in Spanish before they quote it. I don't know where he got it from but he should fire someone who gave him that information incorrectly," Perez-Verdia said. "I can't believe an individual would quote Che Guevara."

The strike was to protest what workers called hazardous working conditions and was first reported by CBS Miami in April. The employer, Eulen America, which services Delta and American Airlines, has denied allegations of unsafe and unclean conditions.

"There will be voices that tell you there is not enough money to treat working people right," de Blasio told the strikers. "There is plenty of money in the world . it's just in the wrong hands. It should be in your hands."

American and Delta have issued statements that the strikes, which are also taking place in other cities, have caused no disruptions to service so far.