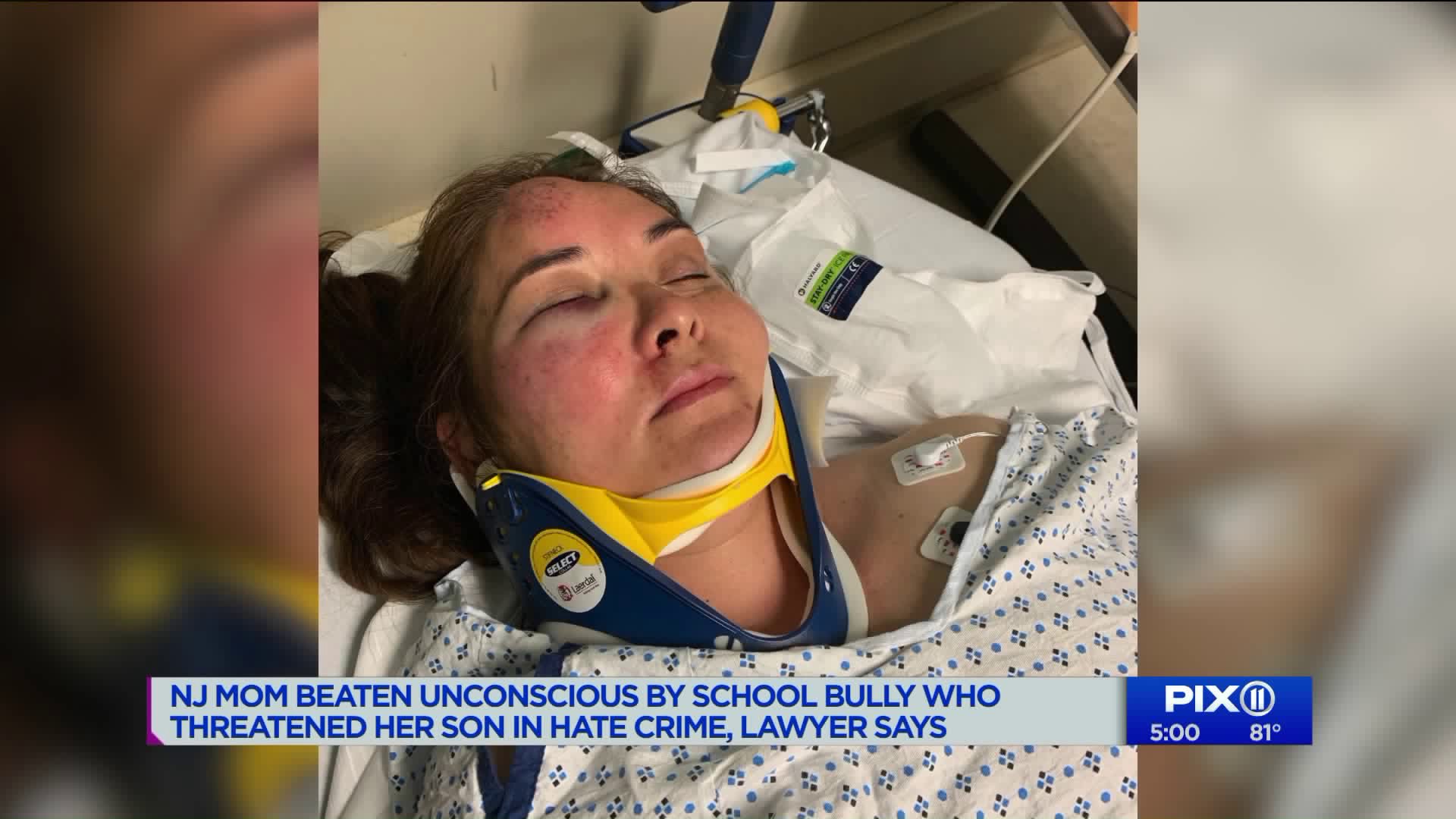 A 13-year-old boy and his mother were walking along Lexington Avenue, when another teen approached them, the prosecutor`s office said.

PASSAIC, N.J. — A 13-year-old boy was arrested after allegedly assaulting a mother and her son in New Jersey last week.

It happened on June 19 after 3 p.m. on Lexington Avenue near Monroe Street in Passaic.

Beronica Ruiz was pushing her 1-year-old in a stroller, walking home from school with her 12-year-old and 8-year-old sons when they realized they were being followed by a group of three boys.

"My life changed in one second," said Ruiz, "Because now I don’t feel safe in any place."

Her right eye is bloodshot. Her eye socket, fractured and bruised, after a punch to the face by an alleged bully who first targeted her 12-year-old son.

Ruiz suffered a concussion and can’t remember the attack. But her children witnessed it all.

"She was unconscious with my baby in the stroller," said Alfonso Vasquez, Ruiz's husband. Their 12-year-old son was also struck in the face.

The attack stemmed from an argument on June 18 in the lunchroom at Passaic Gifted and Talented Academy Public School No. 20.

"These kid were telling the Mexicans that all the Mexicans should be behind the wall," said Vasquez. "My son told them what are you talking about? We are all immigrants."

His son was allegedly threatened with violence. He sought help from a teacher.

He as then placed in a separate room or an office for the rest of the school day for his own protection. His parents went to talk to school administrators, who did not call Ruiz and her husband about the incident in school that day. Ruiz and Vasquez say the vice principal apologized to them for not notifying them about the incident but stated the situation was under control.

Later that day is when the attack on Ruiz and her son occurred.

But even after the vicious attack that put her in the hospital — the alleged bully was still in school. He was not immediately suspended, according to the family.

"We send our kids to school with the intention they will be safe," said the family's attorney, Daniel Santiago. "What's appalling about that is the school was aware of the incident."

The 13-year-old alleged attacker has been charged with assault and released to his parents, but the family feels this was more than just a simple assault -- it was a hate crime.

"Because this all started because of those words," said Vasquez. "They hate us because we are Mexican."

The Passaic County Prosecutors Office is handling the investigation.

A spokesman for the school district said they can’t comment on student matters.

“As both a father and a husband I am outraged over this incident as Mayor these are things you wish would never occur in your city or anywhere. This incident is being taken extremely seriously I have met with and spoken personally with the family, I have met with my Chief of Police, local officials and school administration as well as board members to make sure there is accountability and that this family receives justice as well as any help and resources we can provide. The details regarding what led up to this incident remain under investigation however one thing is very clear what occurred to this mother is unacceptable and whatever we need to do as a city, as a community to do better by our families and our children we will do."