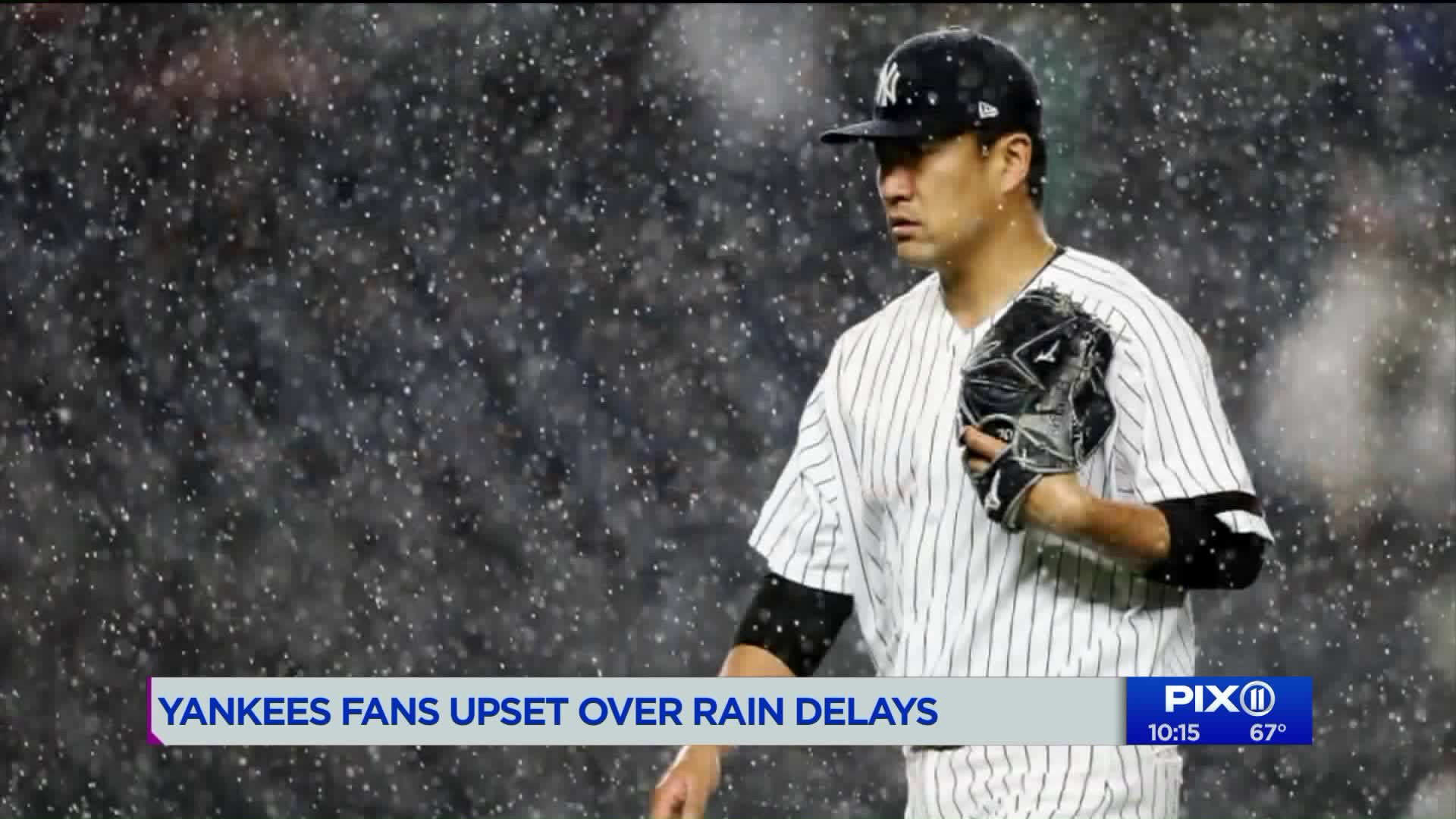 Fans had to wait more than an hour for a rain delay at Yankee Stadium Tuesday as the Yanks took on Tampa Bay. But they were actually lucky because games have been canceled because of weather this wet spring, much to the annoyance of fans who made the trek to the stadium before the game was called.

BRONX - Fans had to wait more than an hour for a rain delay at Yankee Stadium Tuesday as the Yanks took on Tampa Bay.

But they were actually lucky because games have been canceled because of weather this wet spring, much to the annoyance of fans who made the trek to the stadium before the game was called.

“I feel the Yankee pride, we’re really going to push through and have this game today,” said Ryan Guittierez.

The soggy weather certainly didn’t keep the diehards away.

“I feel like the game’s going to get delayed, but I don’t think it’s gonna get rained out,” said Kenny Connelly.

But Mother Nature has not been a fan of the Bombers this season.

“We prepared to sit out in the rain, walk around, do all the things we need to do today,” David Belaez.

Belaez was with his 12-year-son Christian Belaez. Both are super excited to see Yankee slugger Giancarlo Stanton back in the lineup.

According to MLB rules, it’s up to the league to postpone a game before the start. Once it gets underway, the decision is up to the umpires and teams involved to make the call.

But the indecision and/or often late decision to cancel a game is frustrating to fans who’ve already made the trip to the Bronx.

The original start time Tuesday was 7:05 p.m. At 6:17 p.m., the team tweeted the game would not start on time. Fans responded sarcastically on social media.

“Can’t wait until you guys send a tweet at 7:04 saying game is postponed,” tweeted @brddonworth.

“Not like I just paid for parking or anything” tweeted @brian_oconnorrr.

“Please be advised that we do not intend to start tonight‘s game on time but all concession stands are open join us!” tweeted @TheSportsHernia.

Rain delays are not all bad for baseball. Fans tend to wait out the rain at food, drink or souvenir stands which of course is good for stadium business.

The rain delay rules have at least one politician calling foul. Last month Councilmember Justin Brannan of Brooklyn fired off a letter to the MLB commissioner urging him to implement a new policy requiring games be called once rain delays stretch more than an hour beyond the scheduled first pitch.

If weather forces a postponement lasting longer than one hour, he wrote, umpires should instead call the game and “prevent loyal fans from lingering endlessly.”

“When this happens, fans are put in the position of having to forfeit several hundred dollars or more after tickets, food, drinks and souvenirs — without ever seeing a single at-bat. I’m sure that’s not the experience you want them to have.”

Brannan refers to himself to as a “long-suffering Mets fan.”