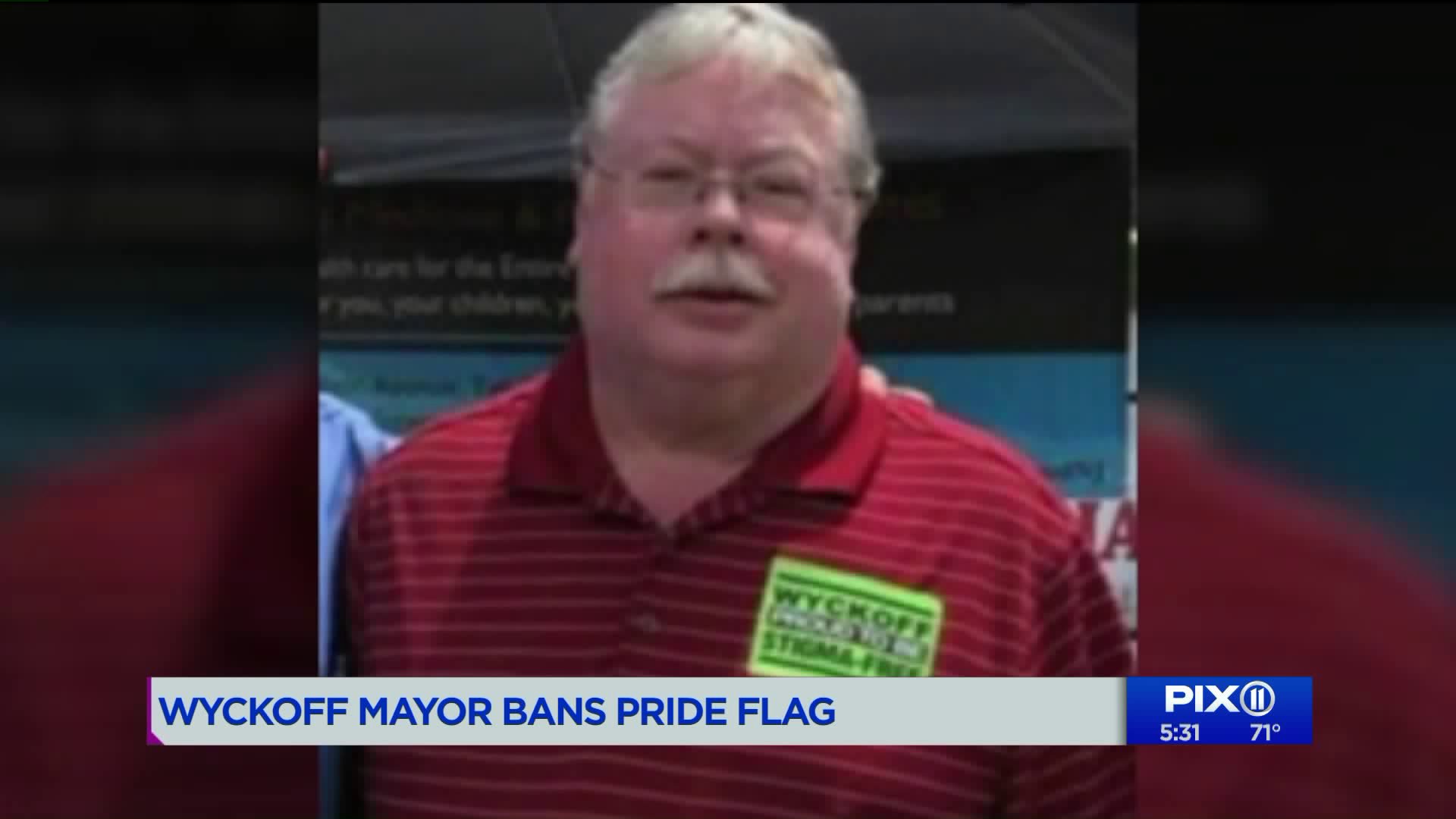 Some residents have asked the town to fly the flag for Pride Month, especially on this fiftieth anniversary of the birth of the Pride Movement. But the mayor, Tom Madigan, has said no. Petition makers say they`ll bring it -- and as many people as possible who`d signed the petition -- to a town hall meeting to confront the mayor. A photo of him wearing the town`s slogan, that says Wyckoff is stigma-free, is circulating.

WYCKOFF, NEW JERSEY -- In contrast to other cities, boroughs and towns in the Tri-state area, this Bergen County township is not flying the rainbow flag for Pride Month; some residents say that by not doing so, Wyckoff is not representing the public's interests.

Their voices are expected to be heard at a town council meeting Tuesday evening.

Three flagpoles stand in front of Town Hall.  Old Glory, the flag of the United States, flies from one of them. At the top of the other two flagpoles are the POW-MIA flag, and the Killed In Action flag. Some residents say that something is missing, however.

"Fly it," said Bill Walmsley. "The gentlemen and women involved with this beautiful flag," he said, about the rainbow flag, "So be it. Let them enjoy it."

David and Amy Ryan, also residents of Wyckoff, said that the situation has been overcomplicated.

"You are what you are. Be yourself," added his wife.

They were randomly interviewed by PIX11 News in their town. Many of their neighbors are calling on the township to fly the flag, an emblem of LGBTQ pride, for Pride Month. Their call is particularly strong this year, the 50th anniversary of the Stonewall Uprising, which birthed the Pride Movement.

However, Wyckoff Mayor Tom Madigan has said that only the flags that currently fly in front of Town Hall will do so. Instead, the township directed that rainbow ribbons be placed on the light poles that surround Town Hall.

When asked if that was adequate, two residents who have actively sought to have the rainbow flag fly were very direct in their responses.

"It's inadequate," said Adam Padla, who's lived in the Bergen County town for 33 of his 36 years. "I faced bullying as a result of my sexuality throughout my time in Wyckoff schools," he told PIX11 News, in an email, adding that it's important "for children to feel the support of their community as they face opposition to who they are from peers on a daily basis."

Padla said that a prominently displayed flag, as opposed to lamppost ribbons, "make[s] all residents, especially our children, feel welcomed in our town and not afraid to be who they are, standing up against opposition."

Elaine Fichera is also a resident and activist.

"We want a proclamation that June is Pride Month, and that we will fly the flag," she said. "I know there are still some people who are hiding [their sexuality] in Wyckoff."

She said that the rainbow flag would signal that nobody needs to conceal their true selves.

Fichera is part of a petition drive in the town to get the flag raised prominently, as has been done in at least five other towns in Bergen County. The petition sought 1,000 signatures, from as many residents as possible. Wyckoff has a population of 17,000.

As of Tuesday evening, the petition had exceeded its goal.

The petition makers said that it's strong material with which to confront Wyckoff's mayor, Tom Madigan. He's publicly endorsed the township's slogan that Wyckoff is stigma-free. However, his critics on the rainbow flag issue said that he's being hypocritical.

"If we're going to be stigma free," said Fichera, the local activist, "let's do it all the way."

Mayor Madigan did not respond to PIX11's efforts to contact him.