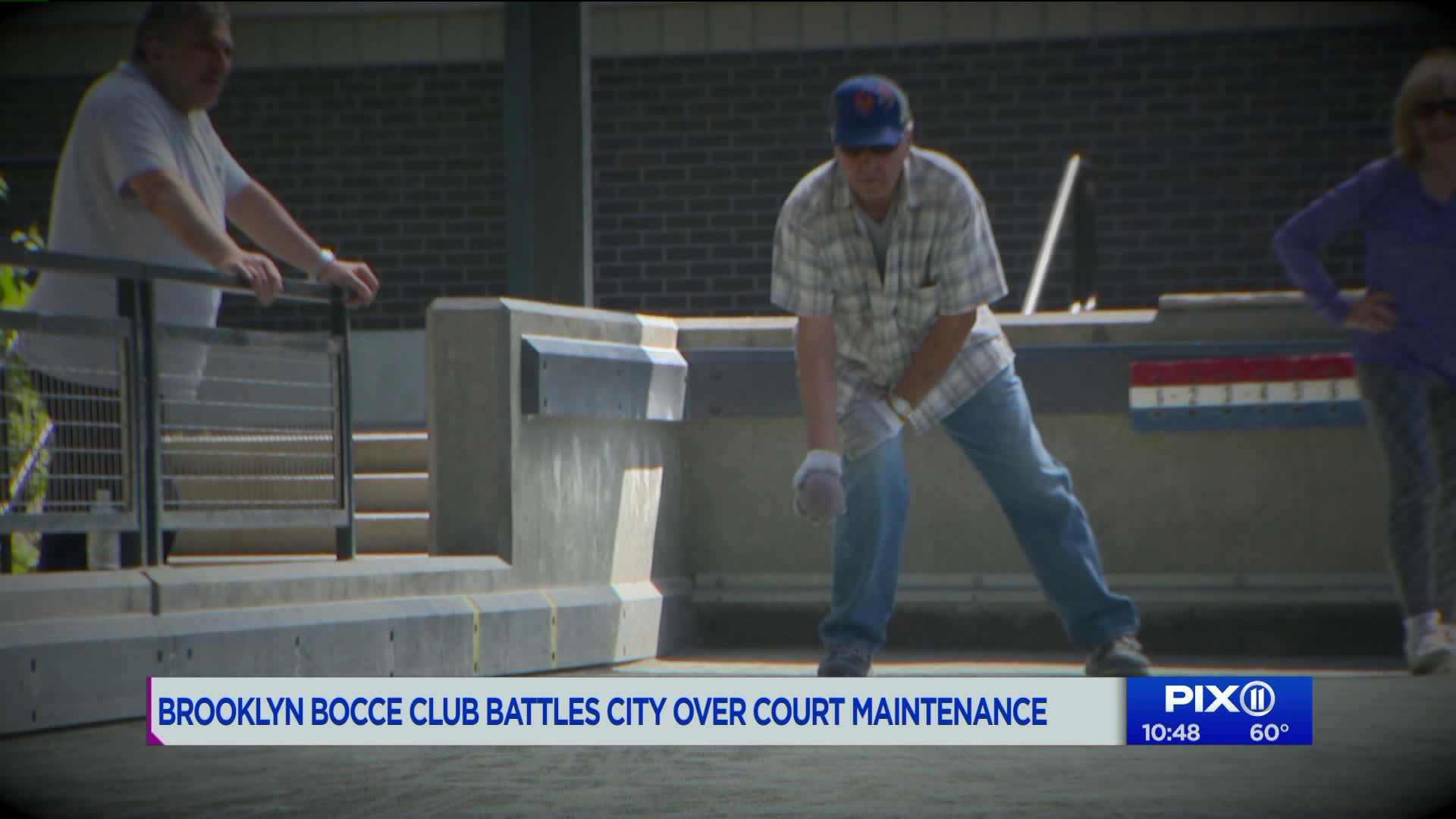 A group of senior citizen Bocce Ball players in Brooklyn says the New York City Parks Department is doing a terrible job maintaining their new courts in Marine Park. The three-court complex, including lighting, seating, landscaping and canopies covering the courts, was built two years ago at taxpayers’ expense. It is a City Council project and cost $5.45 million. The Marine Park Bocce Club’s 60 members and other players use the courts all day, even in cold weather.

Bocce Ball dates back to Roman times. Players attempt to roll their ball closest to a small yellow ball called “the jack." It’s fun, low-key and conducive to friendship and good-natured kidding. Many of the Marine Park players have known each other for years.

The problem courts are rapidly deteriorating. One of them, which used to be the members’ favorite, has become practically unplayable. Water leaking through the canopy has washed away much of the material, called har-tru, covering the clay foundation. There are now deep holes in parts of the court. Some of the pebbles below have surfaced, making the repairs difficult. It requires a lot of har-tru to maintain the courts.

However, the Parks Department, which used to pay for and store the material for the old courts, is no longer doing so.

A spokesperson says “It is up to the bocce group to…supply the clay. This is standard for our outdoor bocce courts.”

The players want to know why they should have to pay for what clearly seems like a Parks Department responsibility.

“It costs a fortune," says a longtime female club member.

In addition, putting down more har-tru can be futile, because each time it rains, a lot of the material is washed away by water leaking through the canopies.

“We have holes here that make craters,” says Sonny. “The city has got to take care of it.”

But the Parks Department spokesperson says the canopies function “is to provide shade, not keep the courts dry.”

Club members shake their heads and wonder why the contractor wasn’t required to use tiles in the canopies that don’t leak. The contractor was called back last year to try to fix the gaps, but the problem remains.

The Parks Department told PIX11, “The bocce group expressed interest in using a sealant on the underside of the canopy to keep water from getting through, which we are allowing them to do.”

She did not mention that club members will have to pay for the sealant, as well as apply it. Parks says it will help members spread the har-tru and provide the rake to do so, but again, the Bocce Club has to foot the bill.

In a statement to PIX11, a Parks Department spokesperson says “Bocce courts are special amenities, which we only build with the support of a dedicated group of users to help assist with the particular maintenance and supplies that these courts need.”

However, when PIX11 asked to see any written agreement that specifies the duties of the club and the Parks Department, the spokesperson never responded.

We asked why the Parks Department used to pay for the har-tru but no longer does so. Again, no answer.

We asked what would happen if the club disbanded. Who would pay the upkeep then? No answer.

We asked why tennis players are not required to provide har-tru and maintain the city’s clay tennis courts, but bocce players are?

After PIX11 began investigating, we learned that a high ranking Parks official now says that in the new fiscal year, starting July 1, there will be money budgeted for the city to provide the materials and maintenance necessary to help preserve a $5.45 million investment of taxpayers’ money, removing an unfair burden away from a group of seniors who share a special Bocce Ball Bond.