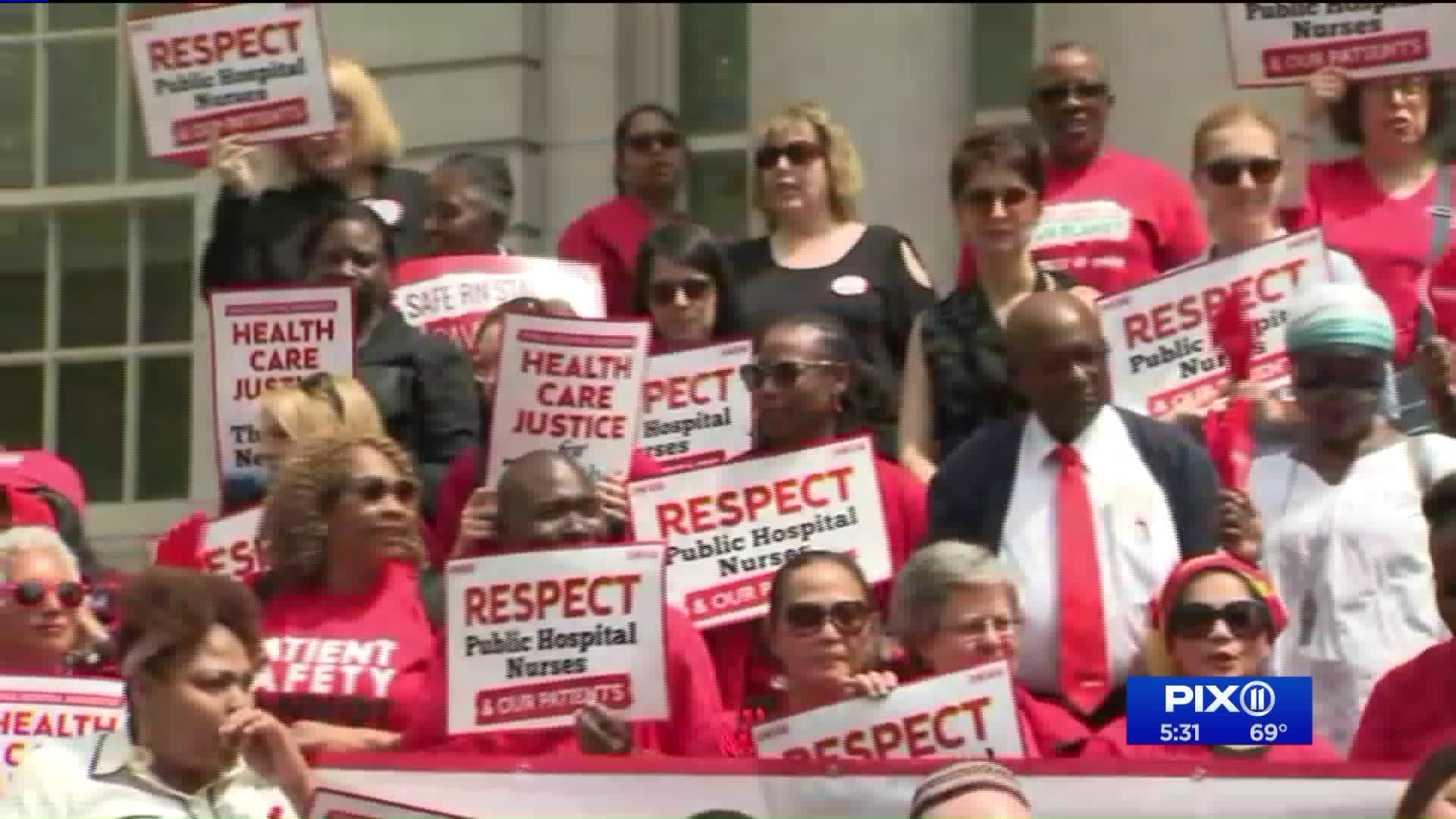 Nurses argue that the lack of funding and understaffing is causing troubling conditions for both staff and patients and public hospitals take in more costs and services private hospitals avoid, including extensive Level 1 trauma capacity, unreimbursed and underfunded medical services and disproportionate share of care for those how are uninsured or under insured.

LOWER MANHATTAN — With more than 1 million people treated every year, New York City’s public hospitals serve more people than the populations of Washington, D.C. and St. Louis, Missouri, combined. The health of those New Yorkers is in danger, according to the nurses who treat them.

The reason, nurses say, is that they’re understaffed, underpaid and overworked. While they’re hoping to remedy that with a new labor contract, some nurses are calling on Mayor Bill de Blasio to focus more on New Yorkers’ health and less on his presidential aspirations.

About a hundred public hospital nurses were on the City Hall steps on Wednesday morning, a week after their labor contract ran out. Negotiations on a new contract begin next Monday, and they said that it needs to take into account deteriorating employment conditions that are in turn endangering New Yorkers' health.

"Twelve patients for one nurse," is how Tawana Peynado, a nurse at Harlem Hospital, described conditions where she works. "Now you tell me, what kind of adequate care are these patients getting?"

She said the needs in the next contract are simple.

"More money," said Peynado. "We need to keep these nurses. The nurses are leaving."

Specifically, her union, the New York State Nurses Association, says that at the city's privately owned hospitals, nurses earn, on average, $90,000 a year. That's about 14 percent more than public hospital nurses' $78,000 annual salary, or about $1,000 more per month. The NYSNA also says there are not enough nurses.

"People are going to continue getting sick, sicker than what they are," said Judith Cutchin, a senior leader of NYSNA, in an interview. "Some may even die if we don't get these safe staffing levels."

The nurses' union is hoping for a new contract that is similar to one that private hospitals recently made, which sets a limit on how many patients a nurse can see at once. It also increases staff.

At their Wednesday rally on the City Hall steps, many prominent elected officials joined the nurses, including the Brooklyn and Bronx borough presidents, the city's public advocate and comptroller.

Mayor de Blasio also happened to pass by the rally, on his way in to City Hall -- he was back in town between campaign trips to Iowa and elsewhere. He gave the nurses a thumbs up as he passed.

However, said one nurse, "He's a very busy man lately, running for president."

"It would be nice," Roxanna Garcia, an RN at Woodhull Hospital continued, “if he would dedicate some of that attention to his city and to the nurses, and put his money where his mouth is.”

The New York City Health + Hospitals Corporation, a public agency, operates the city’s public hospitals. Regarding the current situation at its facilities, it issued the following statement:

“Nurses are the heart of NYC Health + Hospitals, which is why we have hired over 340 new nurses to make sure we deliver the safest and highest quality care possible. As part of our transformation, we have made significant investments in staffing to improve patient experience. We have a strong relationship with the New York State Nurses Association and look forward to working together to support our nurses.”