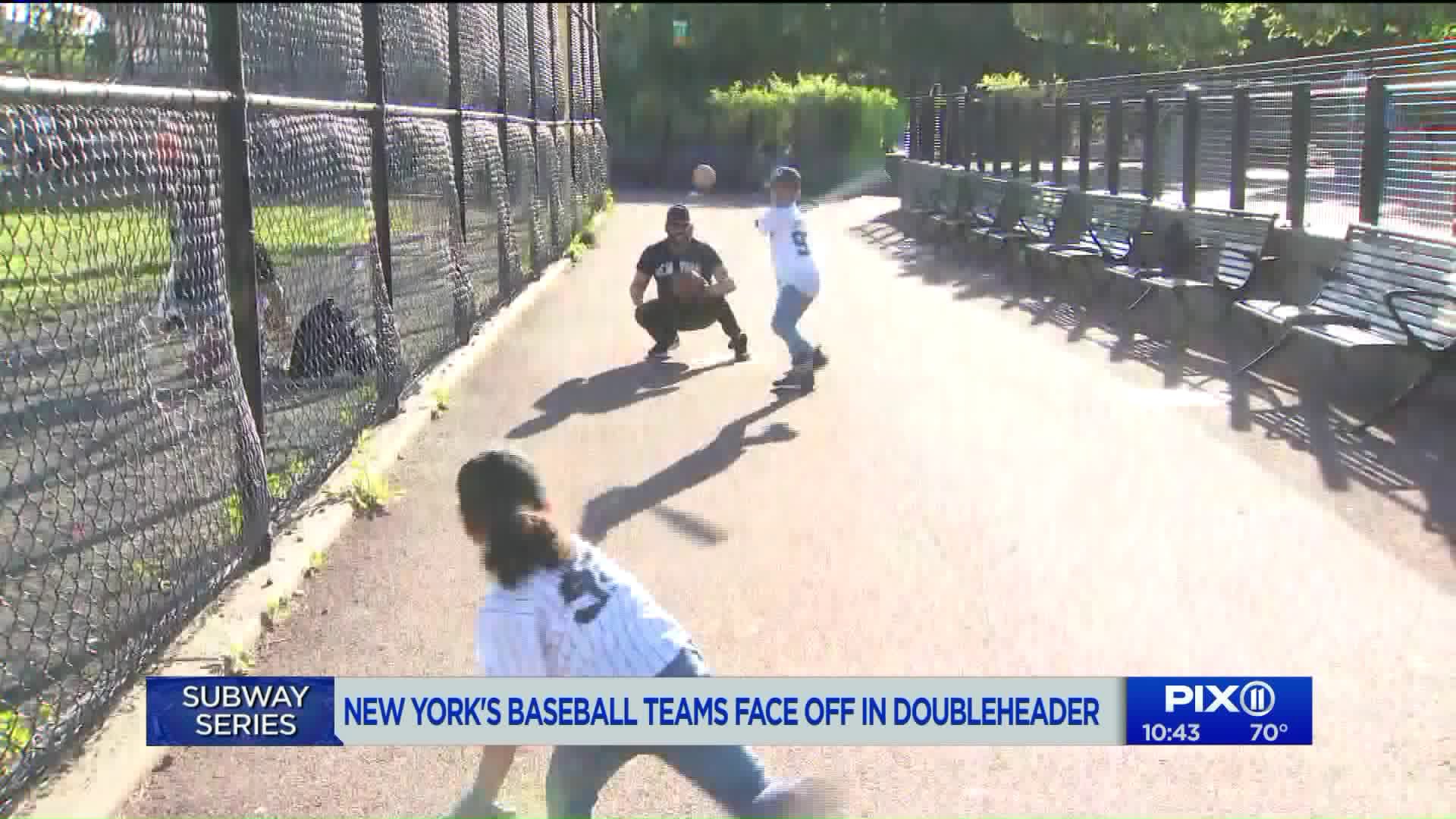 Greg Mocker has the sights and sounds from today`s action at Yankee Stadium.

NEW YORK — Pete Alonso hit a three-run homer in the first inning off an ineffective James Paxton, J.D. Davis and Carlos Gómez also went deep, and the New York Mets beat the Yankees 10-4 for a split of their day-night Subway Series doubleheader Tuesday.

Jason Vargas (3-3) wasn't sharp early but got stronger as the night wore on, helping the Mets to only the fifth win in their last 23 road games.

Luke Voit hit a three-run homer off Zack Wheeler in a five-run fourth inning as the Yankees overcame a three-run deficit to win the opener 12-5. After falling out of the AL East lead for the first time since the morning of May 19, the Yankees (41-25) moved back into a tie with Tampa Bay atop the division.

Alonso's home run was his 22nd, the second-most for a rookie before the All-Star break, trailing only Cody Bellinger's 25 for the Los Angeles Dodgers two years ago. The drive on Paxton's eighth pitch of the at-bat and 11th pitch of the night left the stadium almost as quiet as it was in the afternoon, when the stands were about a quarter full at the start for the makeup of Monday night's rainout.

Paxton (3-3) remained winless in three starts since a trip to the injured list caused by left knee inflammation. He gave up a season-high six runs, seven hits and two walks in 2 2/3 innings, departing after RBI singles from Michael Conforto, Wilson Ramos and Adeiny Hechavarría.

Coming off a five-hit shutout of San Francisco, Vargas extended his scoreless streak to 17 innings before the Yankees closed to 6-3 in the third. Davis hit a two-run homer off Chance Adams in the fourth, and the Yankees put two on with one out in the bottom half when Vargas found a groove and retired his last eight batters.

Voit was demoted to Double-A by the St. Louis Cardinals a year ago this week. Now he's vying for an All-Star selection and a spot in the Home Run Derby.

He has 30 home runs in 103 games since the Yankees acquired him last July 28 for pitchers Chasen Shreve and Giovanny Gallegos. The 28-year-old took over at first base from the repeatedly injured Greg Bird and has 16 homers this year. He is the leader at his position in the first results of fan voting for All-Star starters.

"This team is giving me a lot of confidence to go out and do my job every day," he said. "It's just having fun in the locker room. I never feel like I'm a deadbeat."

He made his big league debut with St. Louis in 2017 but was behind Matt Carpenter and then José Martinez.

"There's nothing worse than when you're in the minor leagues and you're hitting good, too, and you're just stuck," he said. "There's been multiple guys throughout the history of baseball that have been in that same situation, and for me to finally get a chance, you don't want to ever look back on it and you want to roll with it."

Gio Urshela hit a tying, two-run homer in the five-run fourth, had four RBIs and was a triple short of the cycle, ending a stretch of 15 at-bats without a hit.

Gary Sánchez had three RBIs and tied for the AL lead with his 20th home run .

Masahiro Tanaka (4-5) gave up a three-run homer to Jeff McNeil that put the Mets ahead 4-1 in the third but rebounded to win for the first time in a month.

Pitching on six days' rest after the birth of his daughter Friday and the rainout, Tanaka allowed five runs — four earned — and seven hits in 6 2/3 innings. He had been 0-2 in four starts since winning May 12 at Tampa Bay.

"My slider wasn't very good today. The changeup wasn't really working," Wheeler said. "The fastball was about the only thing going for me."

Yankees left fielder Brett Gardner made a sprawling backhand catch on McNeil leading off the opener.

Mets: 2B Robinson Canó (left quadriceps) was 3 for 3 with two doubles and an RBI in a rehab appearance for Triple-A Syracuse, OF Brandon Nimmo (neck) was 0 for 3 with two walks, and LHP Justin Wilson (left elbow) allowed one hit in a scoreless first inning. ... RHP Noah Syndergaard left before the opener because of strep throat.

Yankees: RHP Dellin Betances strained his lat muscle while pitching to batters in a simulated game Friday and won't throw for a few weeks, manager Aaron Boone said. Betances has not pitched in a game since March 17 because of a right shoulder impingement. ... OF-DH Giancarlo Stanton went 2 for 4 with a solo home run as the DH for Class A Tampa in a doubleheader opener and next week could rejoin the Yankees for the first time since straining a biceps on March 31. ... RHP Jonathan Loaisiga (right shoulder strain) threw on flat ground for the first time since May 9.