Almost a year after teen’s death, ‘Justice for Junior’ will soon be in hands of jury as court arguments conclude 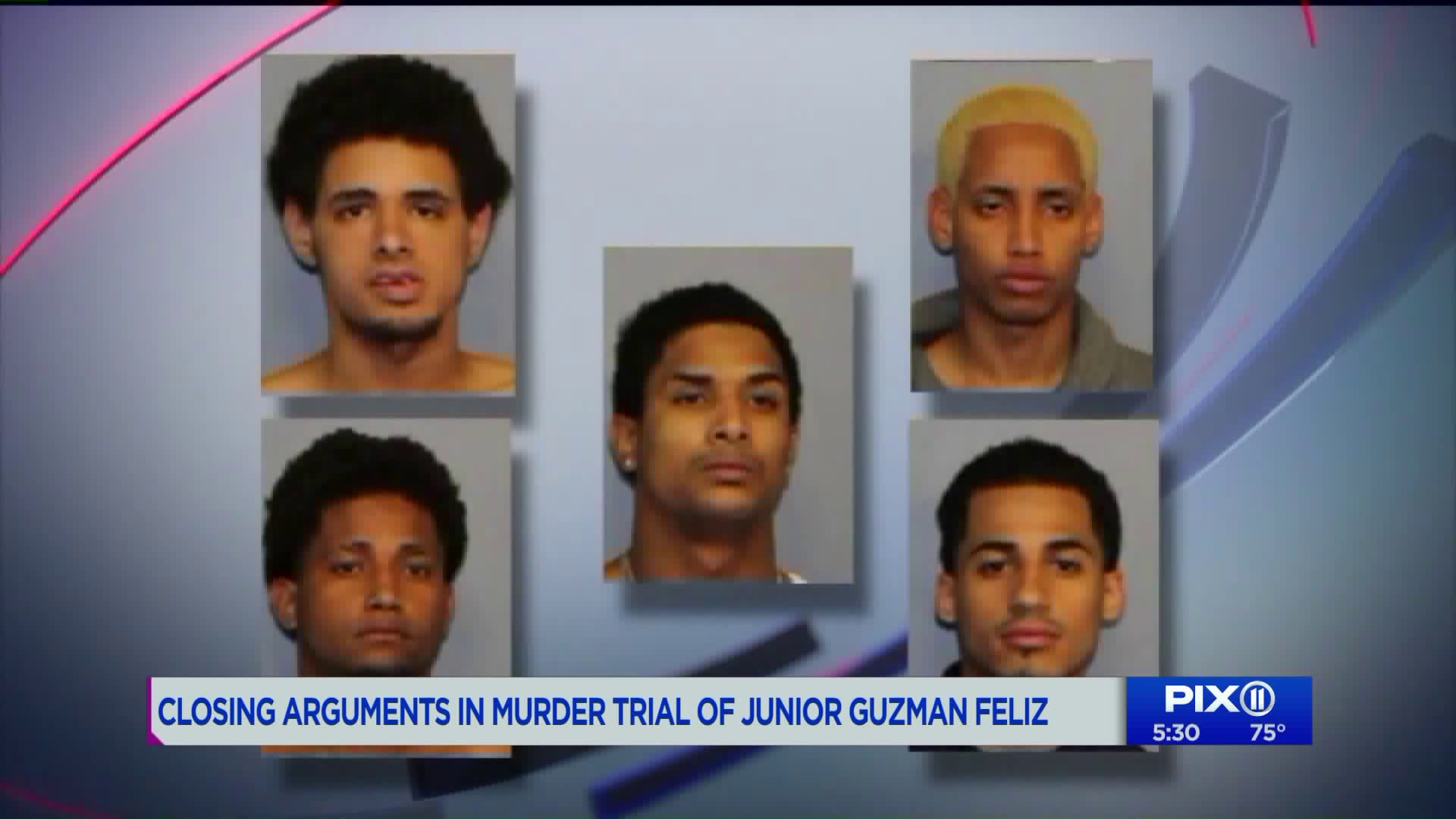 Nearly a year after the brutal murder outside a Bronx bodega, Justice for Junior is finally in the hands of the jury. Defense attorneys for the five men accused of murder in the death of Lesandro Guzman Feliz wrapped their summations Tuesday.

CONCOURSE, the Bronx —Nearly a year after the brutal murder of an innocent 15-year-old boy outside a Bronx bodega,  "Justice for Junior" will soon be in the hands of the jury.

Defense attorneys for the five men accused in the death of Lesandro "Junior" Guzman Feliz wrapped their summations Tuesday, arguing that their clients did not intend to kill the teen, while prosecutors in their closing arguments maintained there's no question the suspects intended to end his life. The judge will hand over the case to the jury on Thursday.

Defense attorney Kyle Watters, who is representing Jonaiki Martinez Estrella, "the one with the red hat" who allegedly delivered the fatal blow to Junior's neck, said his client only meant to harm, not kill the teen.

"Yes, he put the knife through his neck. It's horrific," Watters said. "But he acted with intent to harm. He did not act with the intent to kill."

According to the medical examiner, the fatal injury was caused by a knife 4 1/2 inches in depth — cutting Junior's jugular vein and slicing through his neck.

"It was manslaughter or assault, but it wasn't murder," Watters said.

To be convicted of first-degree murder, the prosecution  has to prove each defendant intended to both kill and torture Junior.

"None of this was torture," Watters said of the 20-second attack. "It was quick."

The suspects — Estrella, Manuel Rivera, Elvin Garcia, Jose Muniz and Antonio Rodriguez Hernandez Santiago — are each charged with first-degree murder, second-degree murder, manslaughter, gang assault, conspiracy and criminal possession of a weapon. They face up to life in prison if they’re found guilty.

Legal analyst Christopher Carrion, who is a criminal-defense attorney, said Watters effectively argued that Estrella was being tested by the leaders of the Trinitarios gang, and that his client risked getting beaten or killed himself if he did not display toughness.

"He did a really good job at showing they were under duress, which is a legal defense to any crime," Carrion said. "He said the defendants took significant steps to not harm Junior, which is the opposite of what the prosecution has been saying all along."

In closing arguments by the prosecution, Assistant District Attorney Morgan Dolan played a silent, 22-minute compilation of every surveillance video of Junior's killing.

Then, while showing photos of Junior's many knife and machete wounds, including the fatal jugular vein injury, Dolan said all five intended to kill the teen.

She said that when a group is told to carry weapons of their choice, find a member of the rival Sunset gang, and "do what you gotta do," as they were allegedly instructed by Los Sures sect leader Diego Suero, then "that is a kill order."

"Thrust after thrust of a knife is an intent to kill," Dolan said, referencing surveillance video of the attack. "When you thrust your knife over and over again, and when you hack a machete at someone, your intent is to kill."

Dolan also used the video to argue that the attack included the component of torture, which is part of the first-degree murder charge.

"If you look at his face on the video, you can tell that he was tortured from beginning to end," Dolan said. "There is no requirement for torture. Doesn't matter if it's three days or three days. They did this for their own advancement in the ranks of the gang. They found pleasure in this crime. And that's what proves it's torture."

Dolan also mentioned recorded prison phone calls between Estrella and his wife, who allegedly calls him a murderer. The conversations also included the mention of Diego Suero, and conspiring to conceal weapons the night of the murder, like dropping it down a sewer. The calls were played in court Friday, but were in Spanish. The jury were the only ones who received a translated copy of the transcript.

Carrion, the legal analyst, praised Dolan's work: "She did a really fantastic job — showing there was intent to commit a crime, that crime was murder, and they took steps to cover their tracks."

After the jury was let go for the day, the defense team expressed concern about one of the jurors becoming emotional every time a video was played in court. They requested that the juror be questioned as to whether she could handle her emotions and deliberate fairly.

Prosecutors scoffed at their request.

Judge Robert Neary decided the defense was overreacting and denied the request.

Wednesday is a prescheduled day off from the trial, and Neary said the case will be given to the jury on Thursday. They will begin deliberations to decide the fate for each of the five defendants.