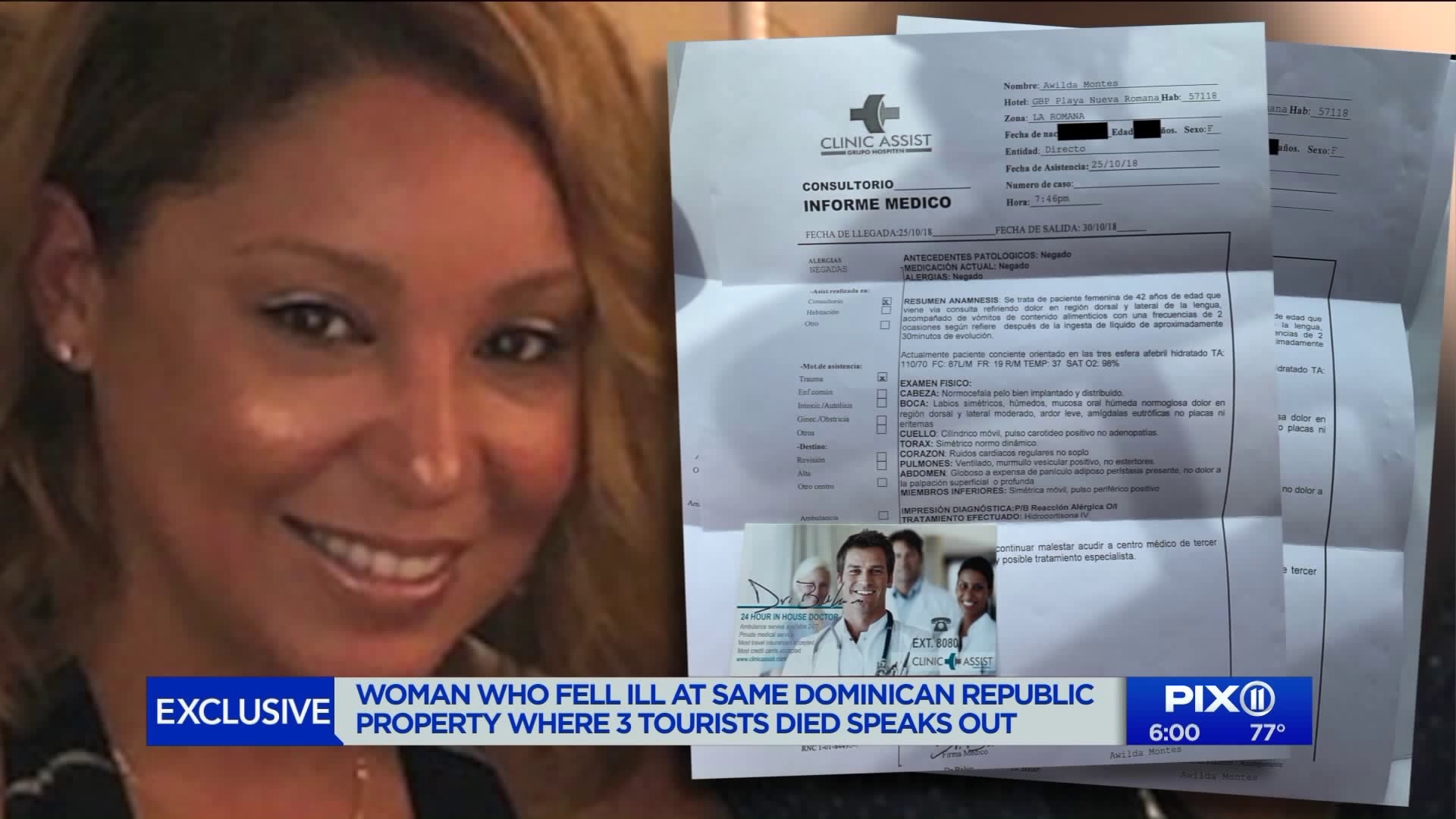 She fell ill while staying at the same resort as the Americans that mysteriously died last month. 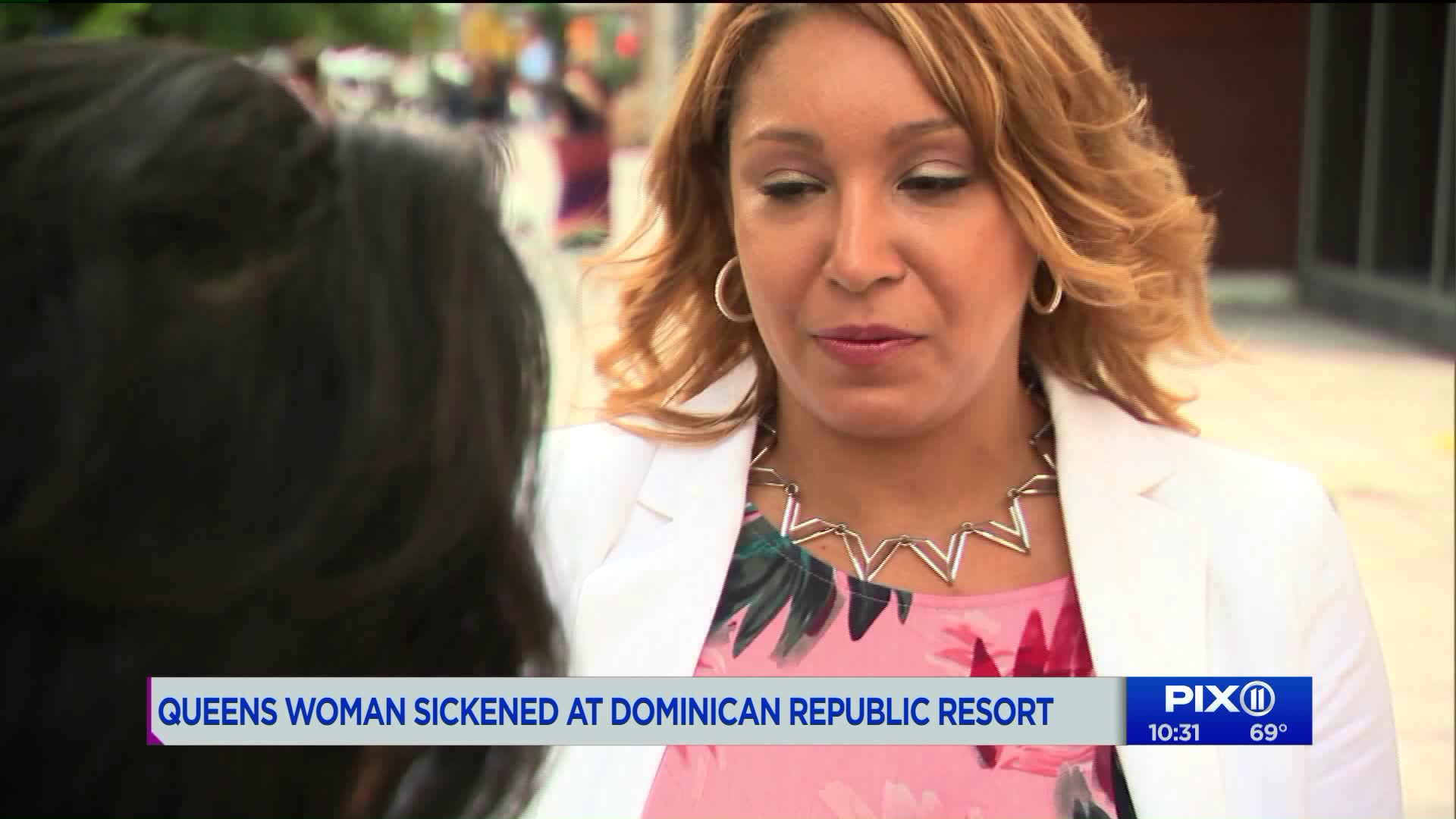 A local woman says she got violently ill at the same resort where three Americans died recently under mysterious circumstances. She's telling PIX11 she strongly believes she was poisoned by something she drank from the mini-bar.

Montes says what started out as a romantic anniversary trip, turned into a nightmare. She and her former boyfriend checked into the Luxury Bahia Principe Bouganville in the Dominican Republic last October. Shortly after arriving in their room, she took a bottle of 7-Up out of the mini fridge. When she drank it, the soda was flat and smelled like bleach... and this happened.

"When I took a swig of it, I kind of held it in my mouth the minute I held it, it just started burning," said Montes. "I ran to the bathroom when I spit it out there was blood, my mouth was on fire, my gums, everything was bleeding."

Montes was rushed to a hospital on the Island and showed PIX11 medical records stating she was treated for pain and vomiting. She believes spitting out the soda, and not ingesting it may have saved her life. "I didn't realize this could've been done on purpose, I just thought it was an accident someone mixed it up, but now i think it was done on purpose."

Montes believes the soda was intentionally tainted. Imagine her surprise when she heard the accounts of the recent incidents on the news, and her further shock when a friend called to tell her it was the same resort she vacationed at.

On May 25th, Miranda Schaupp-Werner checked into Bahia Principe Bouganville, the same hotel as Montes. Werner's husband said she fell ill and died after taking a drink from the mini-bar. Five days later, Edward Holmes and Cynthia Day checked into the Bahia Principe La Romana, also on the same property. The Maryland couple was found dead in their room.

"We noticed it smelled like somebody had dumped paint everywhere," said Kaylynn Knull. The Denver woman, and her boyfriend both got violently ill last summer at the same hotel as Holmes and Day. According to their doctor, their sickness was likely organo-phosphate poisoning - pesticides used on plants.

"I was having the worst intestinal cramping I have ever experienced," said Knull. "It felt like a chainsaw going through my gut."

Montes says she's had anxiety and trouble sleeping since learning what happened to the three American tourists and is heartbroken they died. She wishes the hotel had done more.

"Had they done the investigation they would've known that this would've been prevented," said Montes.

Montes says the hotel offered them a couples massage and a private dinner on the beach to make up for it, but she declined. Right now, she is not involved in any litigation against the resort, she says she just wants to speak out. PIX11 reached out to the resort about Montes' sickness, but have not heard back.

As for the other cases, resort management has said they followed all security protocols and are cooperating with authorities. The autopsy results are inconclusive for the three Americans who died, although they were died from similar causes - respiratory and organ failure. It will take an additional four to six weeks to complete toxicology tests.