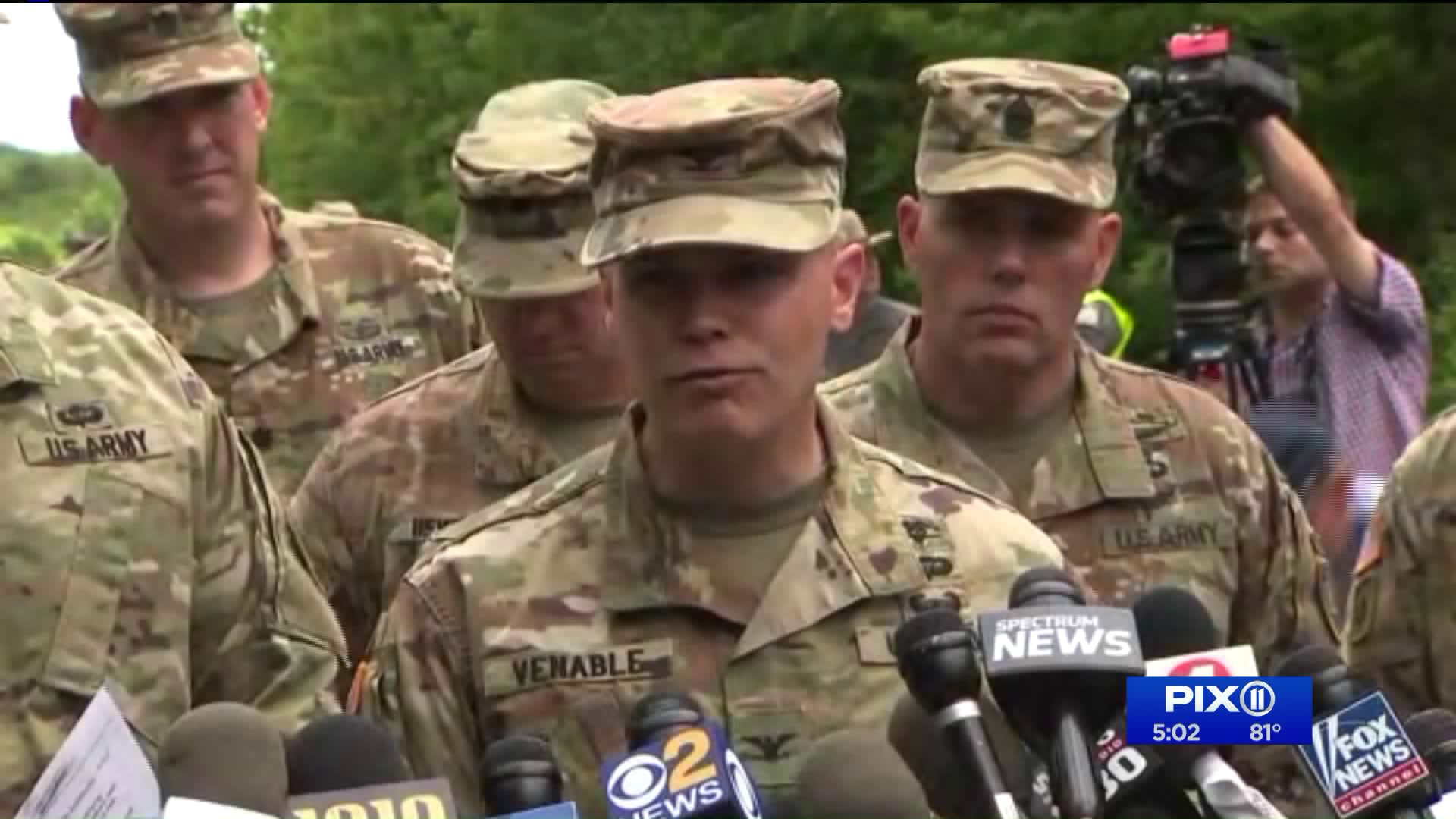 Two soldiers were injured along with 19 cadets in the West Pint Class of 2020. None of the injuries were life-threatening. Injuries included broken arms and facial abrasions, an official with the hospital at West Point said. 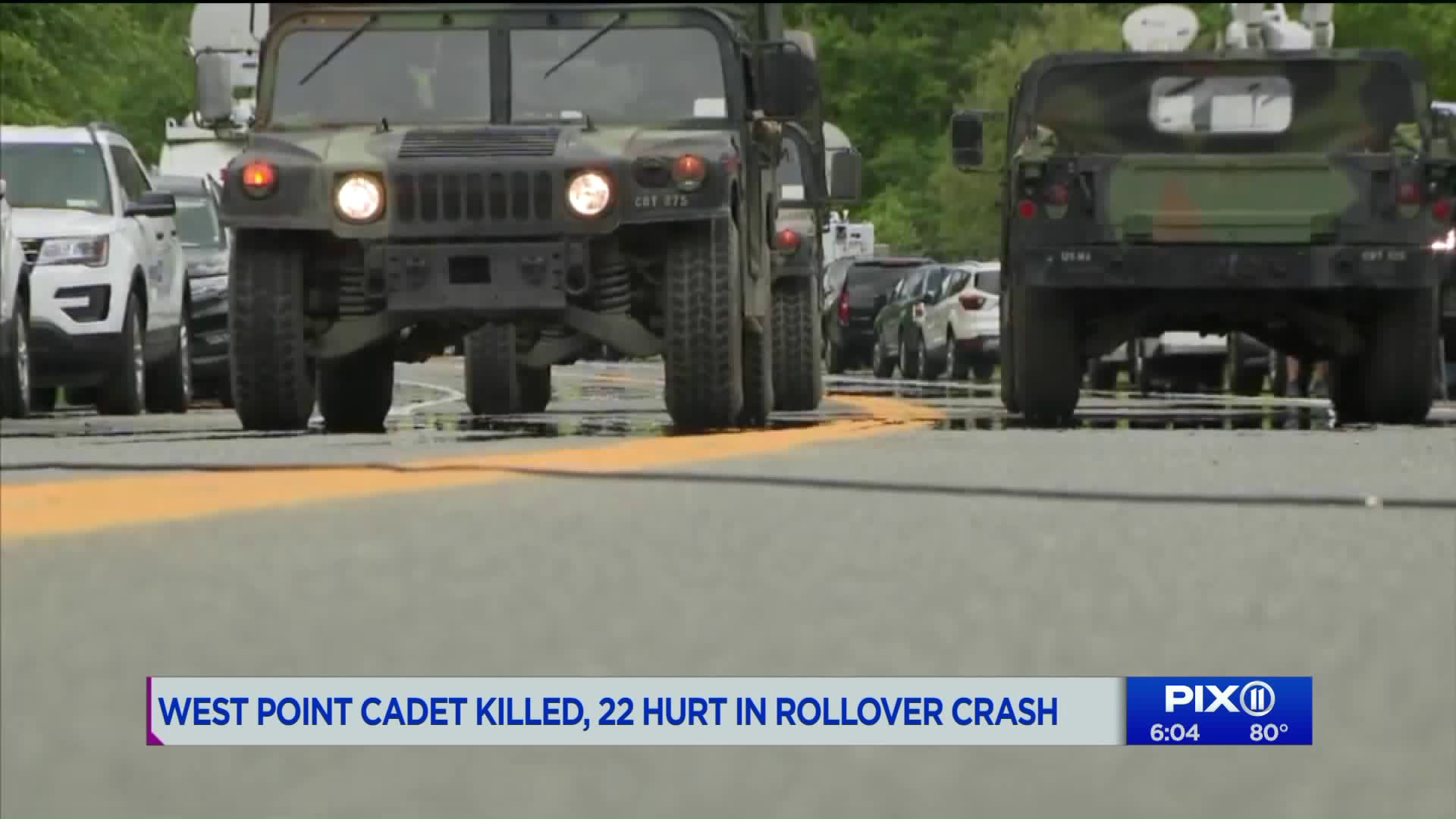 WEST POINT, N.Y. — West Point officials said a cadet was killed and 21 people were injured when a vehicle they were riding in for summer training overturned Thursday morning.

The U.S. Military Academy says the high-axle truck, a light medium tactical vehicle, or LMTV, overturned on a dirt road about two miles northwest of Route 293 at about 6:45 a.m. The crash injured the 19 other cadets who were assigned to the vehicle, and also hurt two soldiers who were driving the cadets in the LMTV.

The accident occurred near Camp Natural Bridge, an area of the 25 square mile campus where cadet summer training takes place.

One cadet is reported deceased, 20 cadets and two soldiers are wounded that were involved in a Light Medium Tactical Vehicle accident that occurred at approximately 6:45 a.m. off Route 293.

The troop vehicle was transporting the cadets to their land navigation training when the vehicle overturned, Lt. Gen. Darrell Williams said.

The lieutenant general said the cadets, who are rising seniors at the academy, were traveling through a "hilly, mountainous terrain" to allow them to experience real-life training. It is not common for the vehicles to tip over, according to Lt. Gen. Williams.

Williams would not provide the name of the cadet who died. He said that the cadet's family has been notified, but it's U.S. Army policy to not release the name of a fallen member of military service for 24 hours after next of kin notification.

The other people involved in the crash were taken to Orange Regional Medical Center in Middletown, Montefiore St. Luke's Cornwall Hospital in Newburgh, or Keller Army Hospital at West Point. Even though two of the injured people were airlifted from the scene, everyone is expected to be okay.

"The injuries range from a facial abrasion to a broken arm," said Col. Brent Venerable, the commander of Keller Army Hospital. "They are all non-life threatening injuries."

The crash, which remains under investigation, prompted messages of condolence and concern by both the president of the United States and New York's governor.

"So sorry to hear about the terrible accident involving our great West Point cadets," President Trump tweeted Thursday afternoon. "We mourn the loss of life and pray for the injured. God Bless them all!"

So sorry to hear about the terrible accident involving our GREAT West Point Cadets. We mourn the loss of life and pray for the injured. God Bless them ALL!

"My heart breaks for all those involved in the tragic training accident at West Point this morning," Gov. Andrew Cuomo said Thursday morning in a statement.

"These courageous cadets and soldiers represent the best of New York State and our country, and we owe them a debt of gratitude for their bravery in choosing to serve our country and protect our freedoms. This incident is made all the more heart wrenching as we commemorate the 75th anniversary of D-Day today, a day where we remember those who gave their lives for our country," the statement continues.

"I am grateful to the first responders who are on the scene right now and am directing the State Office of Emergency Management to provide any resources necessary to assist. On behalf of all New Yorkers, we pray for a speedy recovery for those involved and we share in the sorrow experienced by their loved ones during this extremely difficult time," Cuomo said.

The US military academy is located in New York, a 45-minute drive away from New York City, according to the academy.

Cadets take part in field training exercises during their second summer at West Point. That training "is designed to familiarize and train each Third Class cadet in basic and advanced individual Soldier skills," according to the West Point website.

"Training is conducted in combined arms operations, introducing the cadets to the combat, combat support and combat service support branches of the U.S.," the site says.