Mother of ‘Junior’ banned from courtroom for the day after outburst 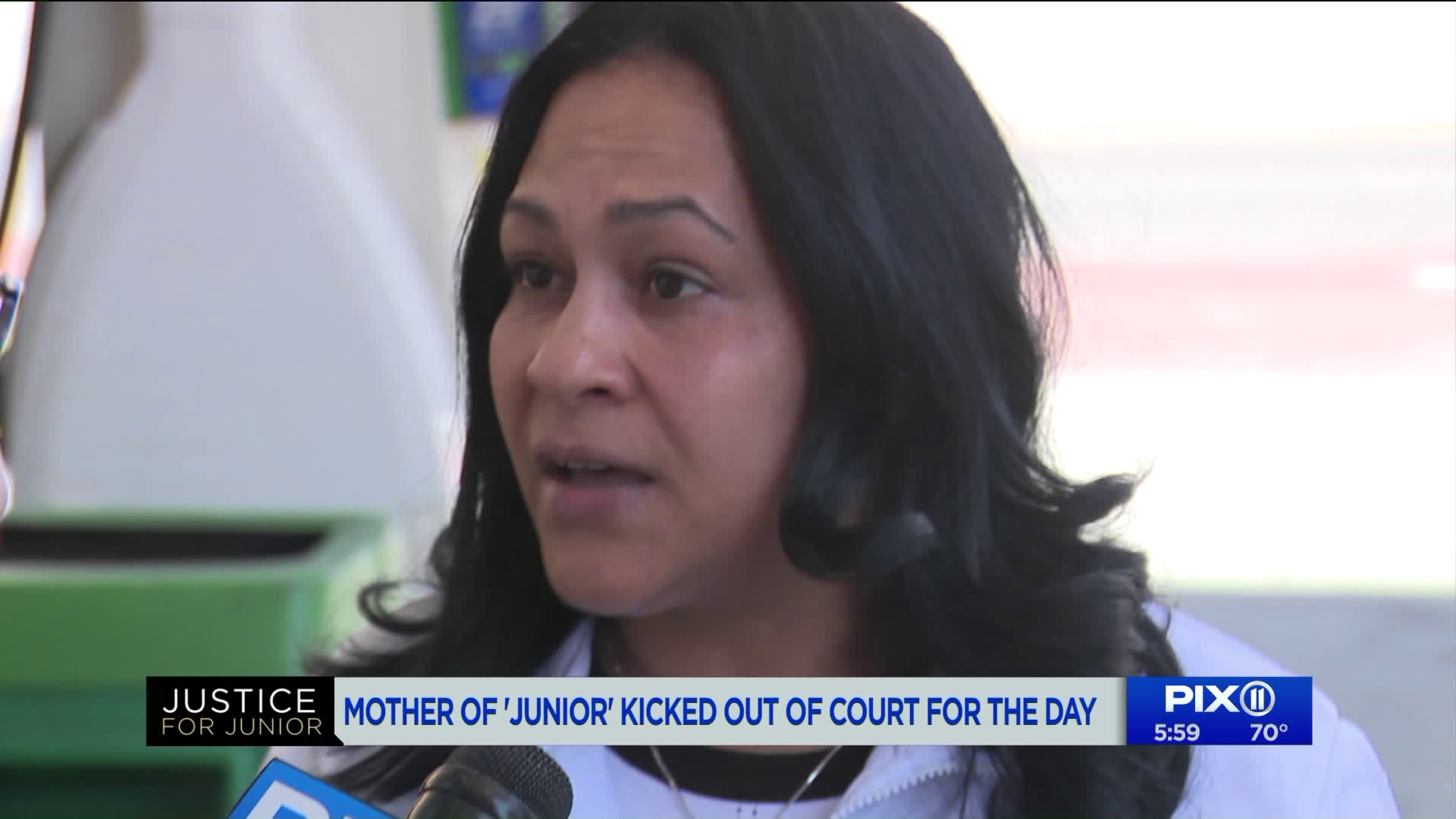 The mother of slain teen Lesandro "Junior" Guzman-Feliz was barred from returning to court Tuesday, after yelling out loud during the cross-examination of cooperating witness Michael "Sosa" Reyes.

THE BRONX — The mother of slain teen Lesandro “Junior” Guzman-Feliz was barred from returning to court Tuesday, after yelling out loud during the cross-examination of cooperating witness Michael “Sosa” Reyes.

Shortly after the incident, however, court was canceled for the day because of a sick juror.

After leaving the courtroom, Leandra Feliz summoned PIX11 to a nearby gas station to explain that she was upset by Reyes' testimony that one of the men allegedly involved in her son's death was not a gang member at the time of the 2018 attack.

“Kevin Alvarez has a good offer, time served,” mother Leandra Feliz said of another witness, “and then I’m afraid now Michael ‘Sosa’ Reyes is trying to clean up another one of the Bad Boys.” The Bad Boys being a sect of the Trinitarios gang — several members of which are accused of killing Junior.

Junior’s mom said she got upset during Sosa’s testimony, under cross-examination, that the guy who was riding in his car — known as Philly — was not a Bad Boy Trinitarios member the night Junior was chased and then fatally stabbed.

Philly, whose real name is Danilo Payamps Pacheco, is facing charges of murder in the second degree at a later Bronx trial.

“He’s trying to clean him, too,” the mother said about Pacheco.

Reyes' plea deal with the Bronx District Attorney’s Office requires him to testify truthfully in this and future trials.

If the prosecution is satisfied Reyes was truthful, he will have a guilty plea he made for manslaughter in the first degree dismissed.

Alvarez, the star witness who was initially charged with murder, has an agreement that allows for a future withdrawal of his first-degree manslaughter guilty plea, with a standing conviction of conspiracy in the fourth degree retained with “time served.”

Junior’s sister, Genesis Collado-Feliz, told PIX11 she understood why her mother got so upset about Sosa.

“He did say they were members of the gang on Friday,” Genesis said, referring to Sosa’s direct prosecution testimony, “and now he’s saying that Philly was not a member of the gang."

In fact, Sosa said Tuesday under cross by defense attorney Kyle Watters that he had left the Bad Boys division of the Trinitarios in April 2018, when he was kicked out.

Yet he testified at length Friday that he was present the night of June 20 on Boston Road, when the leader of Los Sures and the boss of Bad Boys, gave the order to go after members of the rival Sunset crew.

Junior’s sister said of defense claims that Junior was in a photo with the Sunset crew, "It’s so stupid. He’s obviously not in any of these pictures. He was literally the best kid ever.”

And she’s upset that Michael Reyes, whom she once met at a party before her brother's slaying, is getting what she believes is a sweet deal.

“I don’t like it at all. You’re getting no jail time. Why do you need to get your charges dismissed, as well? You’re not clean.”

Watch Mary Murphy's interview with Leandra Feliz and her daughter after she was barred from the courtroom.