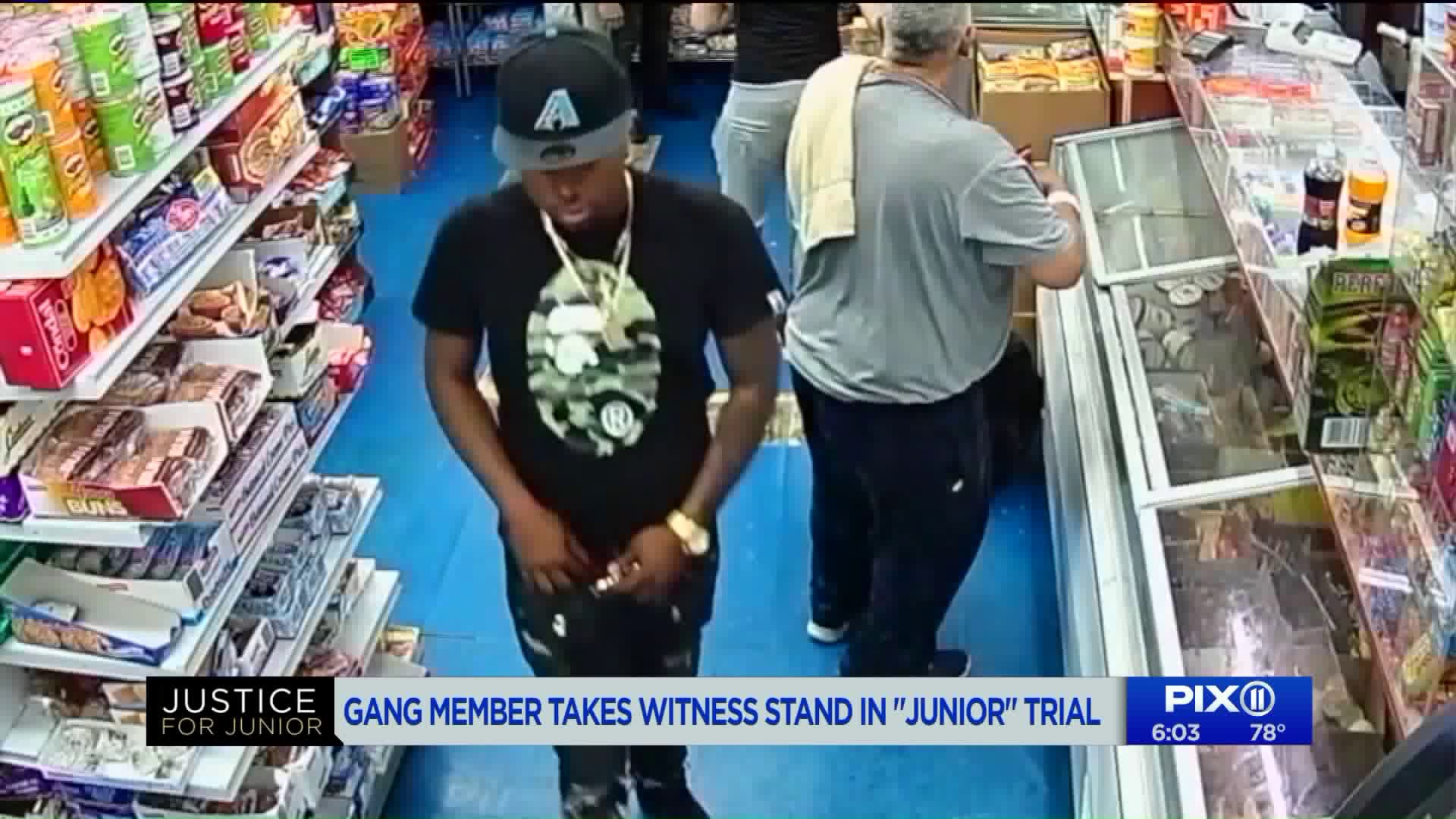 In highly anticipated testimony on Friday, the admitted Trinitarios gang member who helped police track down several "Junior" murder suspects revealed he decided to leave the bodega "at the moment that I saw Junior`s face," he said in Spanish, using an interpreter.

THE BRONX — He'd just chased the terrified "Junior" into the Bronx bodega the night of June 20, but when he finally got a good look at the 15-year-old boy, Michael "Sosa" Reyes had a change of heart.

In highly anticipated testimony on Friday, the admitted Trinitarios gang member who helped police track down several "Junior" murder suspects revealed he decided to leave the bodega "at the moment that I saw Junior’s face,”  he said in Spanish, using an interpreter.

Reyes testified Friday that Lesandro "Junior" Guzman-Feliz was hiding behind the counter.

“I saw him scared, and he reminded me of a person I had seen previously. When I saw his face, my attitude changed,” he testified.

Junior’s sister Genesis was in court listening to the testimony.

She had previously posted on social media that she and Junior had once met Reyes at a party.

Junior’s mother and father were also in court for the key testimony.

It was the mom’s first return to the courtroom in more than a week.

Last week, Leandra Feliz had started screaming and shaking in court during cross-examination of the other star witness, Kevin Alvarez.

Reyes, now 21, jump-started the murder investigation when he turned up at a Bronx police precinct in the early hours of June 23, 2018.

He had fled to the Dominican Republic, but flew back at the behest of a relative.

He helped detectives identify some of the murder suspects seen on surveillance footage by using Facebook.

In his initial testimony Friday, Reyes said he was a member of the “Bad Boys” set of the Trinitarios since he was 16.

He said his set was feuding with another division called “Sunset.”

Reyes said he met up with members of a third set, Los Sures, on the night of June 20.

He testified he saw one member of Los Sures there wearing a red hat, red polo shirt, and white sneakers.

This matches the description of one Junior stabber.

He said “Diente” was a reference to “dentist” — “the way he has his teeth,” before identifying defendant Jose Muniz in court.

He said the orders given by two “set” leaders were “Go after Sunset. You already know what you have to do.”

Reyes testified he used his white 2011 Acura to join the convoy looking for rivals.

The cars came upon Junior looking at his cellphone.

“He raises his hand. He answered the seven,” Reyes testified, not clarifying what “the seven” meant. “All I hear was ‘Oh, s**t, and then he started running.”

Reyes said a guy in his car tried to grab Junior when the teen was running near St. Barnabas Hospital, and the gray Acura with Kevin Alvarez at the wheel tried to block Junior.

“The kid was running too fast,” Reyes told the jury.

Reyes said he and a suspect wearing a green do rag lied to deli workers that Junior “had done something to my grandmother.”

When Reyes decided to leave the bodega, he was still outside when Kevin Alvarez and another suspect dragged Junior out to the sidewalk.

He said of “Diente": “I see Diente pulling at him and grabbing him and with his other hand, attacking him with the machete."

He said he saw “Manuel” getting close to him with a knife but didn’t see the knife go into Junior’s body.

He said the same about “Welfinito” and the suspect with the red hat.

Regarding a fifth stabber who had a covering  on his face, “I saw him running towards Junior and I saw him attacking him with a knife.”