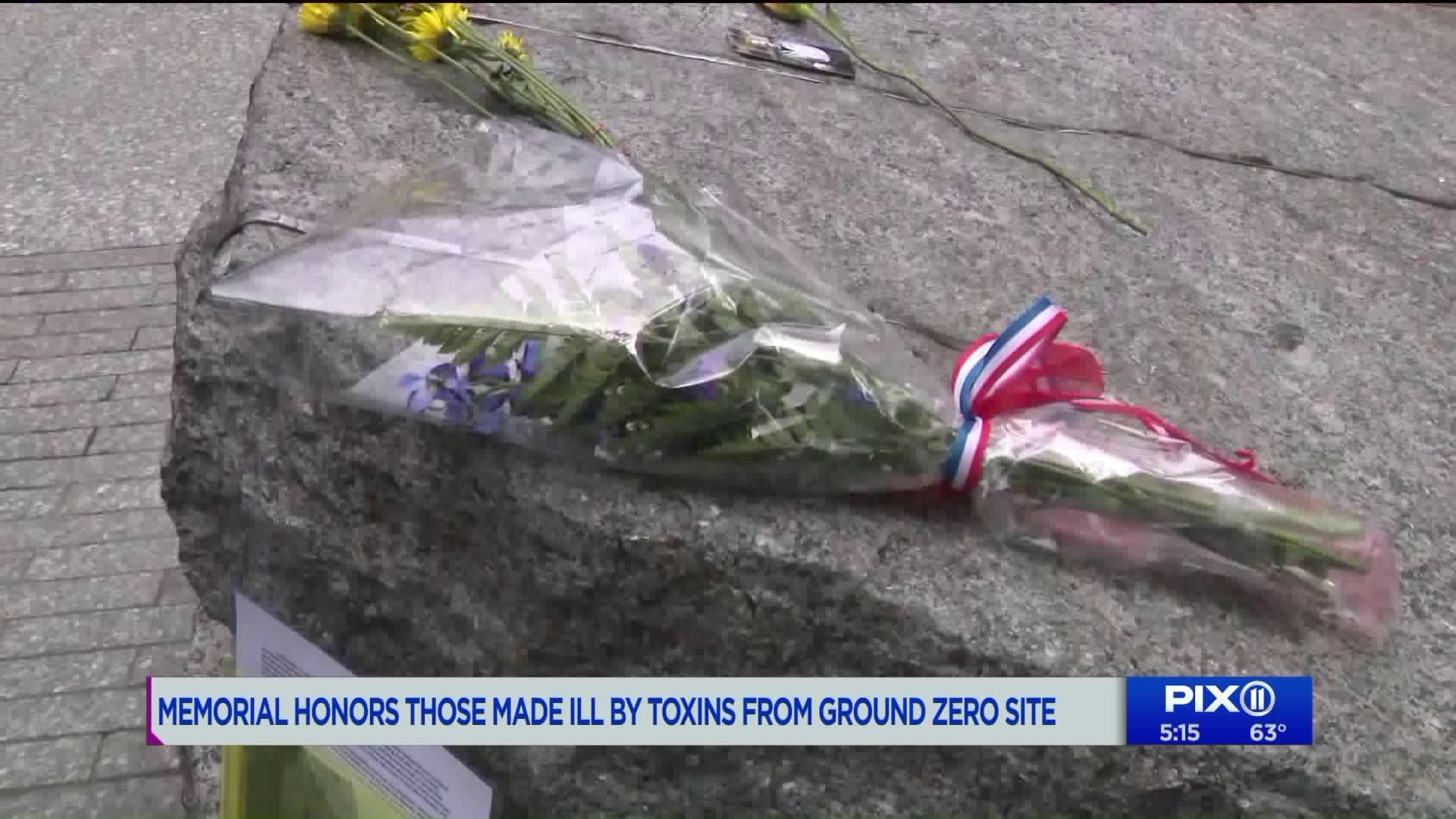 A ceremony at the 9/11 Memorial was observed by those made sick from ground zero toxins.

For seven-and-a-half years, the 9/11 Memorial has been open to the public. On Thursday, it saw a new addition that further memorializes people who sacrificed at Ground Zero.

The 9/11 Memorial Glade is a walkway lined with stone monoliths that commemorates the thousands of first responders, workers, residents and others who lost their lives, or lost their health, from toxins emitted from Ground Zero.

In an hour-long ceremony at the World Trade Center site, former Mayor Michael Bloomberg spoke of the importance of the new section of hallowed ground.

"Today, we are dedicating this memorial glade," Bloomberg said, "to all who became sick or died because of causes related to the attacks."

The ceremony was notably and intentionally similar to the annual 9/11 commemorations.  Because so many people -- at least 1,400 and counting -- have died from 9/11-related illnesses, and thousands more have gotten sick and are at risk of death, the 9/11 Memorial Foundation created the glade in response to requests to honor them. The new site does so at the place where the fallen and the ill made the sacrifices that caused their conditions.

The ceremony featured a bell ringing and a moment of silence for the fallen and the sick, as well as the playing of "Taps," just like the 9/11 commemoration ceremonies every year.

Then the glade opened for the first time to the public, with the first visitors being those who are suffering from 9/11 illnesses, or have lost loved ones.

Barbara Novoa was among that number.  She'd been a Red Cross volunteer at Ground Zero for the nine months it had taken to rescue victims, recover bodies, and clear the Trade Center site of debris after the attacks.

Novoa choked back tears as she told PIX11 News in an interview why she felt compelled to come to the dedication of the glade, and to lay flowers.  "Just honoring my friends that I was here with," she said, adding that many had died.  "This is a great honor for them."

Laura Horowitz had also been a Ground Zero volunteer, who'd returned to pay respects to her fallen friends.  "We're losing a lot of responders by the day," she said.  "It's very sad."

She entered reverently into the Memorial Glade, which is symbolic in a variety of  ways.  It's in the same location at the World Trade Center site where, for years, a ramp had been constructed to provide access to Ground Zero for rescue, recovery, debris clearing, and rebuilding.

The stone monoliths that line the glade are intentionally battered and rough in texture.  Each is about six feet in length, and is anchored into the ground firmly.  The design is meant to convey attributes of 9/11 victims and survivors:  having endured difficulty, but remaining firm.

Furthermore, the ceremony was held on the 17th anniversary of the completion of the Ground Zero recovery and clearing effort.

Once the dedication was completed, attendees said that by having this place, and by having a convergence of people concerned about 9/11 health issues helps them face significant challenges ahead.

"Leave it up to the advocates to ensure that Congress gets a bill passed in the next few months," said John Feal, the founder of the Fealgood Foundation, which has advocated extensively for benefits and assistance for 9/11 first responders and survivors.

Feal was joined, as he walked through the newly opened glade, by Jon Stewart, the celebrity advocate for 9/11 families.  Stewart had led a fundraising effort to pay for the $5 million glade memorial.

"It's been a privilege to be a part of this," Stewart said in an interview, "as frustrating as it can be sometimes, it's an absolute honor."

Both he and Feal have been fighting for months to get Congress to appropriate more money for the 9/11 Victims' Compensation Fund, which is fast running out of money.

One of at least three members of Congress in attendance at the dedication ceremony expressed guarded confidence that the fund will receive new federal cash.  "We have to do that this year," Rep. Jerrold Nadler told PIX11 News.

When asked how confident he was that both the House and the Senate will approve additional funding, Nadler replied, "I'm cautiously optimistic, yes."

One elected official who was noticeably absent from the ceremony was New York's governor.  Andrew Cuomo had been listed in a pre-event press release as a guest speaker.  Instead, his counsel, Alphonso David, represented the governor at the event.