NYCHA wants to demolish playground they just spent $770,000 to build, replace it with residential tower 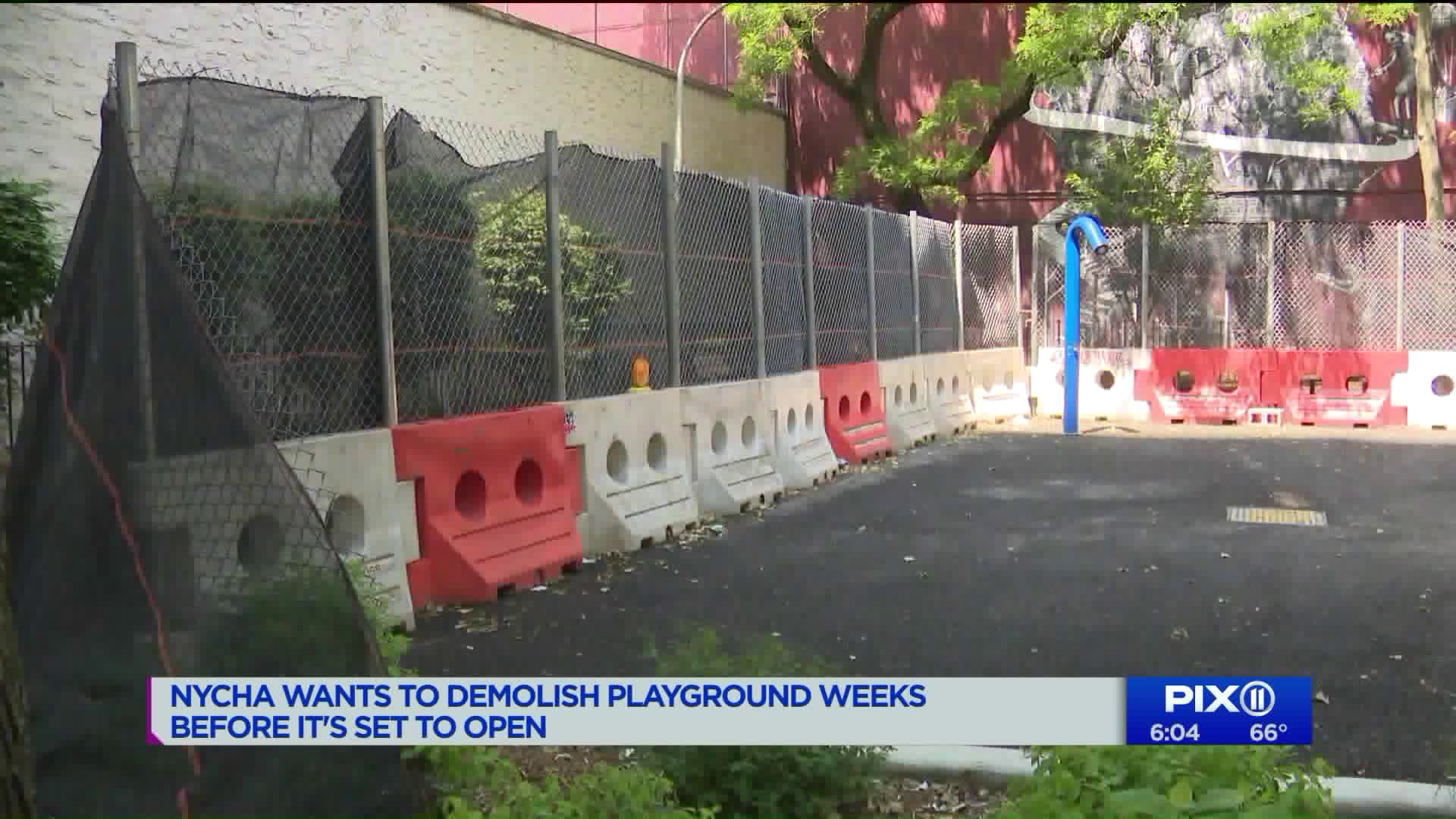 They playground area will be razed so NYCHA can build a new residential tower.

CHELSEA, Manhattan — A plan to improve conditions at a public housing complex in Chelsea would involve constructing a building where a playground now stands. The playground is still under construction itself and its cost provokes sticker shock: $770,000.

“It's all union work that has to be done here,” said Miguel Acevedo, the president of the tenant association at the Fulton Houses, where the playground is located. “And there was also consultants” who had to approve how the playground would be configured.

He pointed out that the tenants had requested that the playground, which has been at the location on West 17th Street since the complex was constructed in 1965, be upgraded. Local State Assemblymember Richard Gottfried secured state funding to cover the large price tag.

She was not just talking about the high price of the playground.  Rohan was also referring to plans by the New York City Housing Authority, or NYCHA, to demolish the playground, possibly as soon as 2021. The playground is on course to be completed in less than three weeks.

Rohan said that she was frustrated over the situation, but still agrees with the plan to replace the playground with a residential tower.

"I could see the money coming back into here and we could redo things over," Rohan said.

She said that she agreed with a plan conceived by NYCHA that would create market-rate housing stock within the public housing complex here.

Specifically, the housing agency has proposed building a new tower in the complex, on the playground site.  NYCHA would move tenants from two low-rise buildings in the 11-building complex into the new tower.  It would then demolish two low-rise buildings, and replace them with high-rise towers that would be majority market-rate apartments.

Since Fulton Houses is in one of the highest-rent districts in the country (the complex sits half a block from the High Line, and its rent averages about $660 per month, as compared to the local market rate of about $3700 per month), that markup, spread across more than 300 apartments, according to NYCHA, would ultimately pay for the costs of renovating and maintaining the entire Fulton Houses complex, as well as the neighboring Chelsea-Elliott Housing development.

In the past few weeks, more than 400 residents, including Rohan, have attended a series of open forums with NYCHA officials in which they've expressed their needs as tenants.  She said that she was pleased that the housing authority gave assurances that nobody would get displaced from their homes, and that their rents wouldn't increase.

"That was the rumor" in the complex, she told PIX11 News.

The NYCHA leader in charge of the forums with tenants said that the gatherings, and their results, are meant to be driven by the people living in the Fulton Houses.

"Our overall goal is to improve residents' lives, while maintaining their current protections, and their rent," said David Pristin, NYCHA's executive vice president for external affairs."

He also said that NYCHA will continue to have meetings with residents, and that their input will drive the process, including what to do about the playground.

"If, in fact, residents say that is the best site," Pristin told PIX11 News, "we will make sure that the developer replaces whatever is taken with equivalent, if not better, resources."

At Fulton Houses, most residents told PIX11 News that the housing agency has been fair in the process.

"NYCHA has been at the tenant meetings," said Miguel Acevedo, the resident association president.  "It's not like anything has been hidden behind our backs."

However, not every resident trusts NYCHA to carry out the process well.

"My mother pays her rent at the bank every first of the month," Fulton Houses tenant James Quiles said.  "We had to go to court and produce all the paperwork" to prove to NYCHA that the family was paid up, Quiles said, "because they were not doing their job."

The next meeting for NYCHA to get community input on development for their complex is the first week of June.