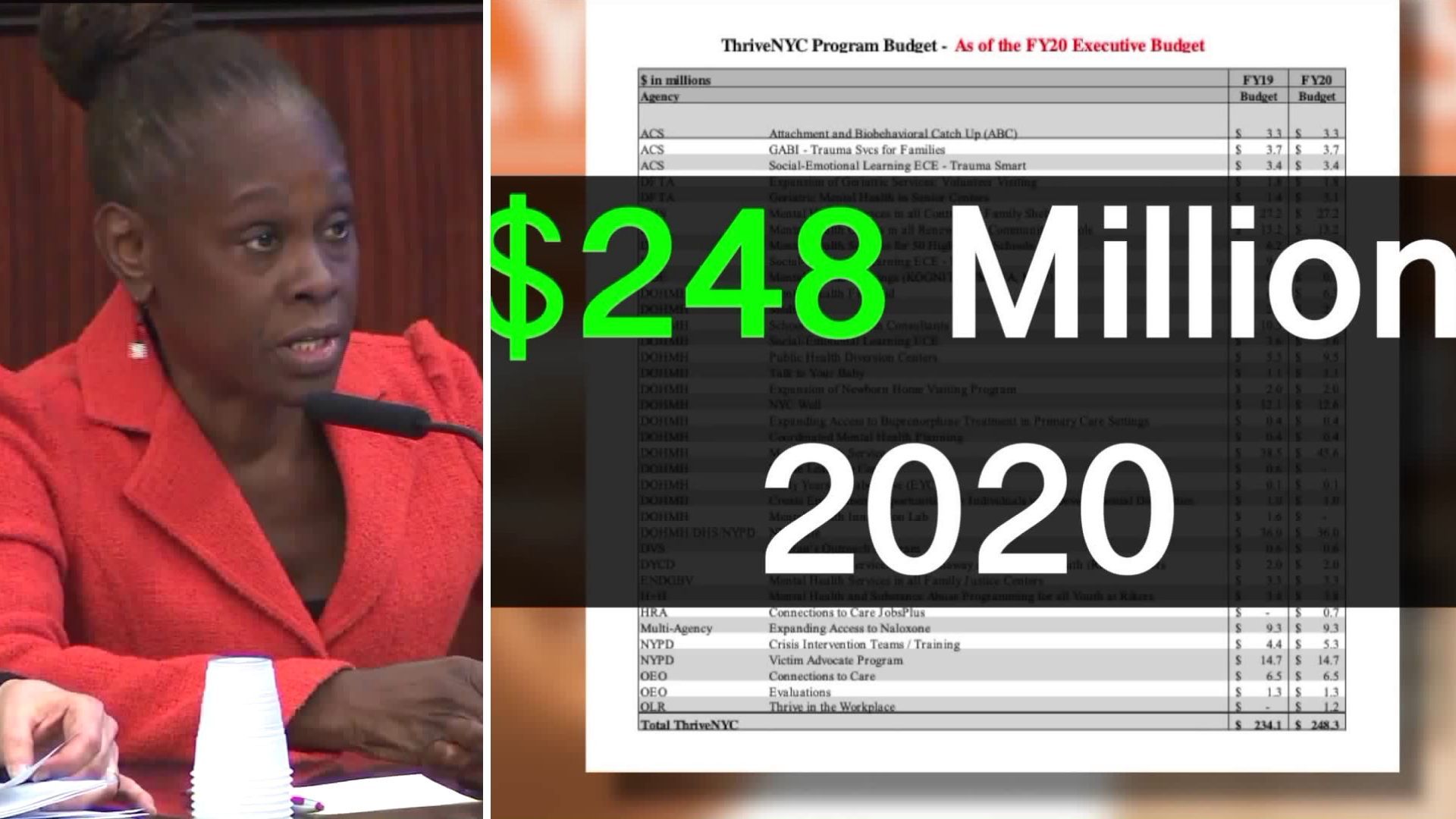 PIX11's Jay Dow tries to get to the bottom of questions surrounding NYC First Lady Chirlane McCray's mental health initiative after the City Council has been grilling McCray and the organization over their budget requests over the past few months.

The First Lady of New York, Chirlane McCray, touts her mental health initiative called THRIVE NYC. It includes dozens of programs run by at least a dozen agencies and is aimed at helping New Yorkers cope with mental health issues.

THRIVE says those issues affect many of us: each year, 20% of adult New Yorkers have some type of mental disorder.

But with all the agencies under the THRIVE umbrella, does Thrive have a good handle on budget and expenditure issues?  .

PIX11 submitted freedom of information requests (FOILs) to all the agencies listed as the lead agency for a program on a document provided by the First Lady’s office. By our count, that totaled 59 programs. We wanted to know their budgets and we wanted them to provide a list of itemized expenditures from 2015 through March 15th of this year.

For two months, we received nothing except requests for more time.  One city budget authority we spoke with told us, “Any agency should have this stuff…it is not a complicated request.”

We contacted the first Lady’s office and asked what was going on.  Suddenly we started getting information.

McCray’s office provided a budget showing THRIVE’s budget as $234 million in fiscal year 2019 and $248 million the next year. But it did not provide any expenditure figures, and its own website states those fiscal year budgets, as being a few million dollars higher.

It also listed 37 programs, not the 59 we counted.

McCray's office said the original count was for fiscal year 2019 and the latter with 37 programs was for 2020; that's quite a change, and the reduction in the number of programs raises questions about why the overall budget is rising.

Many of the agencies involved with THRIVE programs also responded, but most failed to include itemized expenditures.  And, like the First Lady's office, they did not provide data before 2019.

It turns out a number of programs pre-dated THRIVE. They and other programs received funding outside Thrive even though they’re under its umbrella. Any Thrive funds go to their overall budgets so the agencies can't say precisely how money from THRIVE has spent.

One response was particularly odd.

The Mayor's Office of Criminal Justice said it didn't have any of the records that we requested. Yet, the original list the First Lady's office sent to us listed the MOCJ as the lead agency for one thrive program.

The bottom line seems to be that Thrive doesn't have full budgetary control or even up to date breakdowns of expenditures for all the programs it lists as its own.

We'll give you more information about Thrive as we keep looking into it.