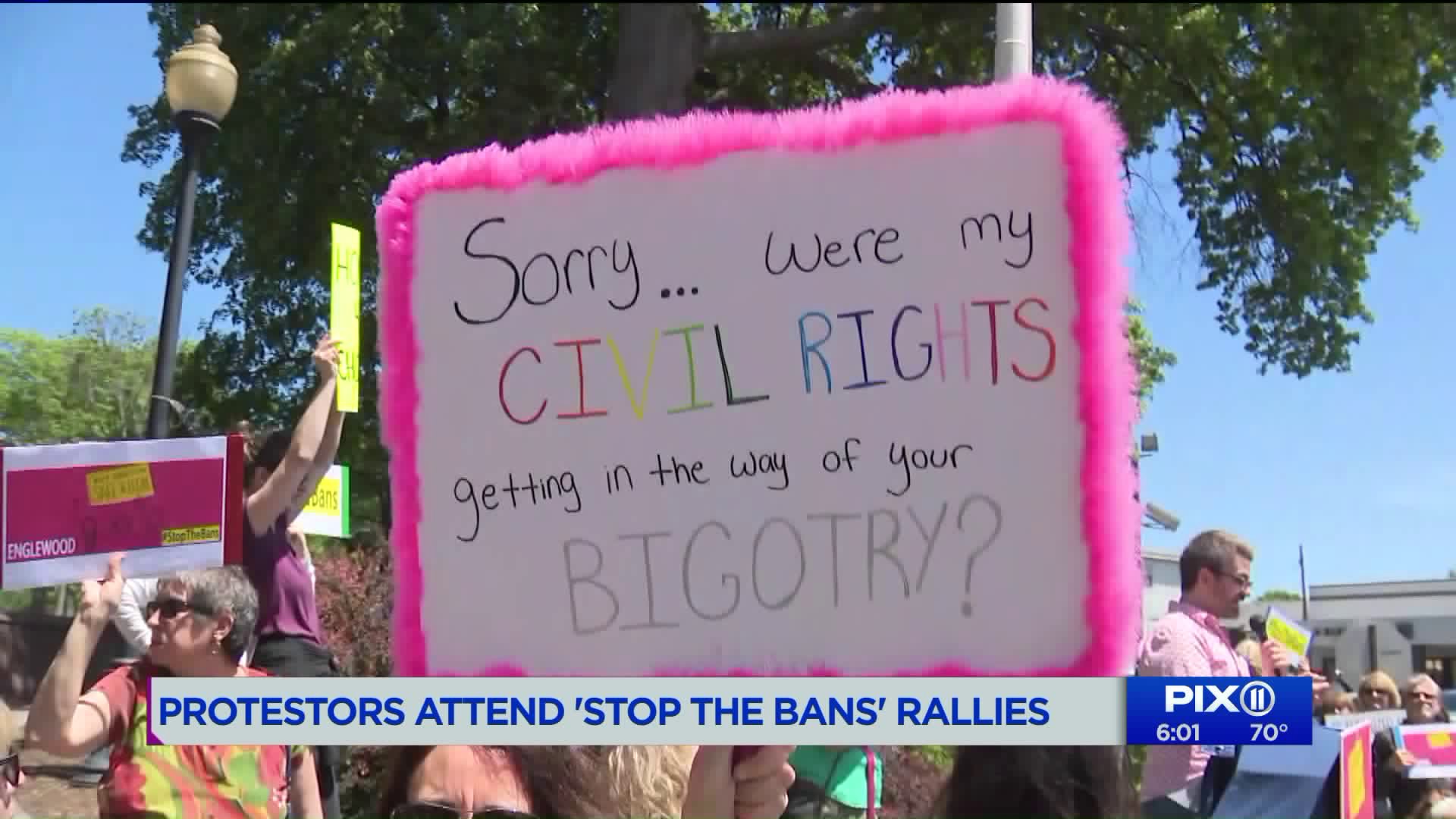 More than 50 organizations -- including the American Civil Liberties Union and NARAL Pro-Choice America -- are participating in #StopTheBans protests nationwide.

NEW YORK -- Holly Nunn is expecting her first baby in September, so it was with a bright pink shirt and a protruding belly that she joined an abortion rights rally outside the US Supreme Court on Tuesday.

"I'm here protesting today because no one should be forced to be pregnant when they don't want to be, and right now our right to make that most basic, fundamental decision is under attack," she said.

Nunn was one of the many abortion rights supporters who gathered at statehouses, town squares and courthouses across the United States in a show of opposition to a wave of laws attempting to sharply restrict abortion.

Massive Turnout for #StopTheBans rally in #NYC #FoleySquare. The #rally, part of a national day of action to stop extreme #abortion bans. At 6p, there were over a thousand people. @PIX11News pic.twitter.com/2tEn96XYIZ

"We will not go back," protesters in Charlotte, North Carolina, chanted.

"My voice, my choice," protesters outside the Georgia state Capitol in Atlanta shouted.

"Across the country, we are seeing a new wave of extreme bans on abortion, stripping away reproductive freedom and representing an all-out assault on abortion access," organizers said.

"This is Trump's anti-choice movement... and it's terrifying, particularly for women of color and low-income women who are most affected by these bans."

The Georgia protesters carried signs that read "Stop the bans" and "Don't take away our care." They also targeted lawmakers who recently passed a restrictive "heartbeat" abortion law with chants of "What do we do? Stand up, fight back!"

A number of Democratic presidential contenders joined the protests, including Sen. Bernie Sanders and Mayor Pete Buttigieg in Washington.

"I stand in solidarity with those across the country to #StopTheBans," Sen. Kamala Harris tweeted. "We will fight with everything we've got to protect a woman's right to make her own health care decisions."

Last week, Alabama enacted the strictest abortion law in the country. It would make abortion illegal in virtually all cases, including cases of rape and incest. The new law says doctors who perform an abortion could face up to 99 years in prison, punishments similar to penalties for rapists and murderers.

But due to legal challenges, it could be years before Alabama's law takes effect -- if it ever does at all.

The 1973 Supreme Court decision Roe v. Wade legalized abortion in all states up to a certain point of viability. However, with President Donald Trump's appointment of Brett Kavanaugh to the high court, anti-abortion advocates believe they may have enough votes to overturn that decision.

The Alabama legislation was designed specifically to go to the Supreme Court and challenge Roe v. Wade, said Eric Johnston, president of the Alabama Pro-Life Coalition, which helped draft the Alabama bill.

But it can take years for the Supreme Court to hear a case, if it chooses to hear the case at all. The nation's highest court decides which cases it wants to take.

Georgia is one of the latest states to enact a so-called "heartbeat law," meaning virtually all abortions are illegal once a heartbeat is detected. That can be as early as six weeks, which is before an embryo becomes a fetus, according to the American College of Obstetricians and Gynecologists.

"We will show up to speak out and fight back against this unconstitutional attempt to gut Roe and punish women," organizers of Tuesday's protests said.

"Politicians shouldn't be making decisions best left to women, their families, and their doctors."

The National Right to Life -- the largest anti-abortion organization in the country -- said it is fighting a different kind of national wave.

"We bet you are frustrated. You are frustrated with the extreme pro-abortion agenda that seems to be taking over our country," Right to Life previously tweeted. It called for supporters to attend its national convention in July.