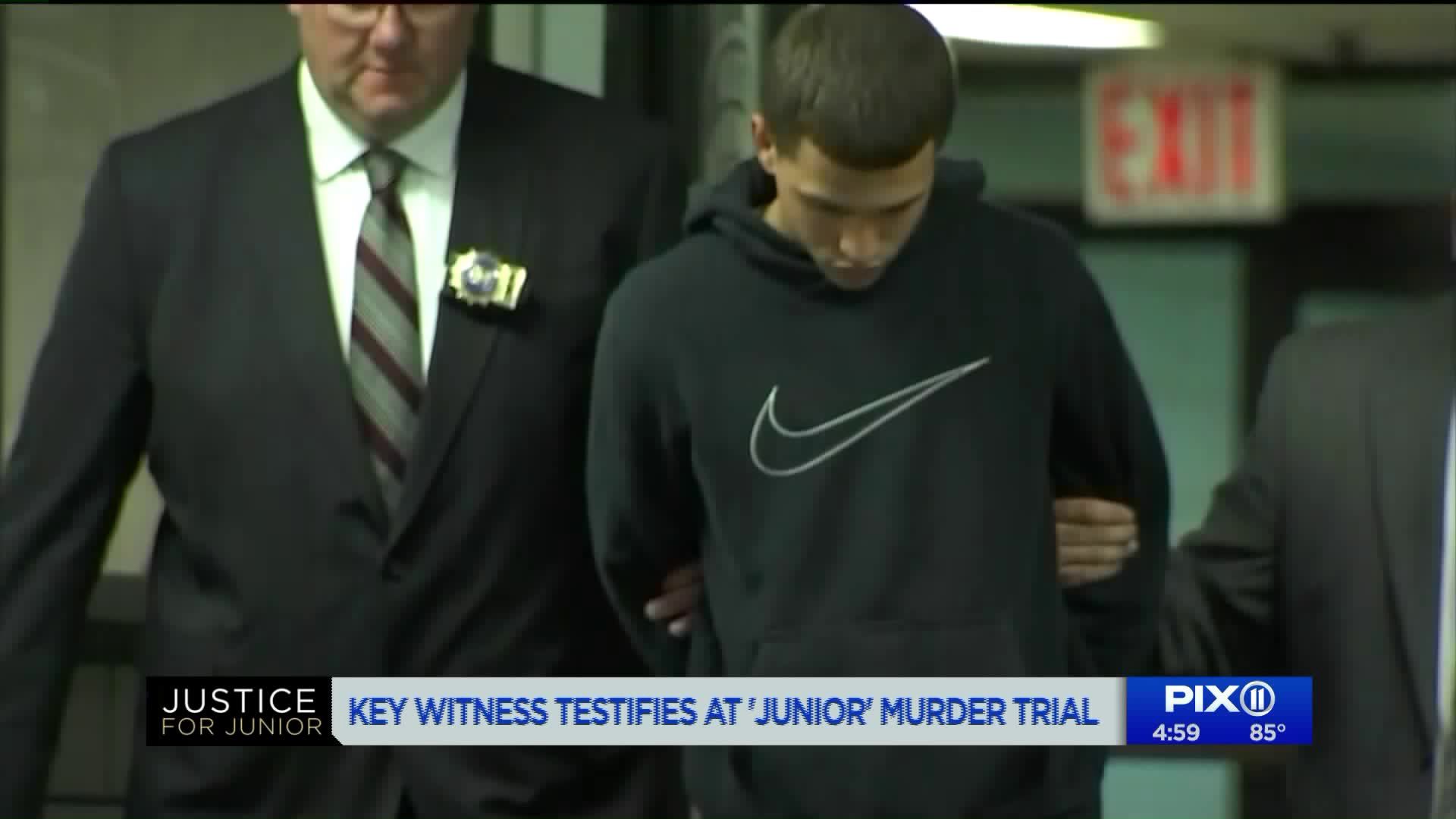 Kevin Alvarez was infamous for getting captured on surveillance storming into a corner bodega June 20, 2018, and dragging the terrified Junior out to the sidewalk, where a mob fatally stabbed the teen with knives and a machete, according to officials.

THE BRONX —Kevin Alvarez, the star prosecution witness in the “Junior” trial, took the stand late Monday morning and identified five murder defendants as fellow members of the Trinitarios gang who took part in the chase and attack on 15-year-old Lesandro Guzman Feliz last June.

Alvarez was infamous for getting captured on surveillance storming into a corner bodega June 20, 2018, and dragging the terrified Junior out to the sidewalk, where a mob fatally stabbed the teen with knives and a machete, according to officials.

Alvarez pleaded guilty in the case nearly three weeks ago and agreed to testify for the prosecution.

Wearing a lavender, buttoned shirt with navy chinos — and with his voice quavering at times — the 20-year-old witness talked about a convoy of cars looking for rivals from the Sunset division of the gang, when the group came upon Junior about 11:30 pm near the “Little Italy” section of the Bronx.

The gang was allegedly seeking out Sunset members because a leader of the Trinitarios' "Sures" set, Diego Suero, blamed Sunset for shooting another gang member in the eye a couple of nights before.

Alvarez said one gang member, known as “Welfinito,” yelled out a car window at Junior, using the Trinitarios phrase “Popo.”

“Welfinito and a few members of the Sures started approaching him and asking him certain questions,” Alvarez testified.

“The only thing I heard him say was that he wasn’t ‘Sunset,’” Alvarez said.

“All the guys made a gesture like they were gonna hit him and he started running,” Alvarez said, referring to Junior.

Alvarez told the jury he was driving his mother’s gray Acura in the chase “and I attempted to block the kid from running past the hospital,” referring to St. Barnabas Hospital on Third Avenue and East 183rd Street in the Bronx.

Alvarez said Junior managed to run across the street past him “toward the deli,” referring to the Cruz and Chiky bodega on Bathgate Avenue.

Alvarez parked the car, he said, and saw a set leader known as “Colita.”

He testified, “I was told by Colita to go in the store and take the kid out.”

Alvarez said he went into the store with two gang members: “Menor” and “Sosa.”

He testified that Junior “was behind the counter, trying to hide and trying to go behind the owner of the deli.”

“I was talking to the workers in the deli that he was part of some shooting that happened to ‘Chino,'” Alvarez said.

Alvarez told the prosecutor he had no direct knowledge that Junior belonged to Sunset.

“At that point, the deli guys told me they don’t want any problems. Take it outside,” Alvarez said.

“At that moment, one of the deli guys opened the door that was blocking the back.”

The court then broke for lunch.

Alvarez had earlier explained how he’d only been involved in the Los Sures set of the Trinitarios as a probationary member for four months last year.

He said he had actually studied criminal justice briefly in college and left the U.S. Army with an injury, before getting involved with the gang in February 2018.

“I kind of thought it was a little cool,” Alvarez said.

Alvarez testified there were three leaders of the Los Sures, two men in charge of discipline, and two guys leading security for members who were considered part of a “town.”

“I was made aware that sometimes you would have to jump people or stab people,” Alvarez said.

He identified defendant Jonaiki Martinez Estrella as a probationary gang member called “Pio,” and observed Trinitarios would move up the ladder by carrying out missions.

Other defendants on trial had already attained the status of soldier.

Estrella, the alleged probationary member, is accused of plunging a knife into Junior’s neck near the end of the attack, slicing the 15-year-old victim’s jugular vein.