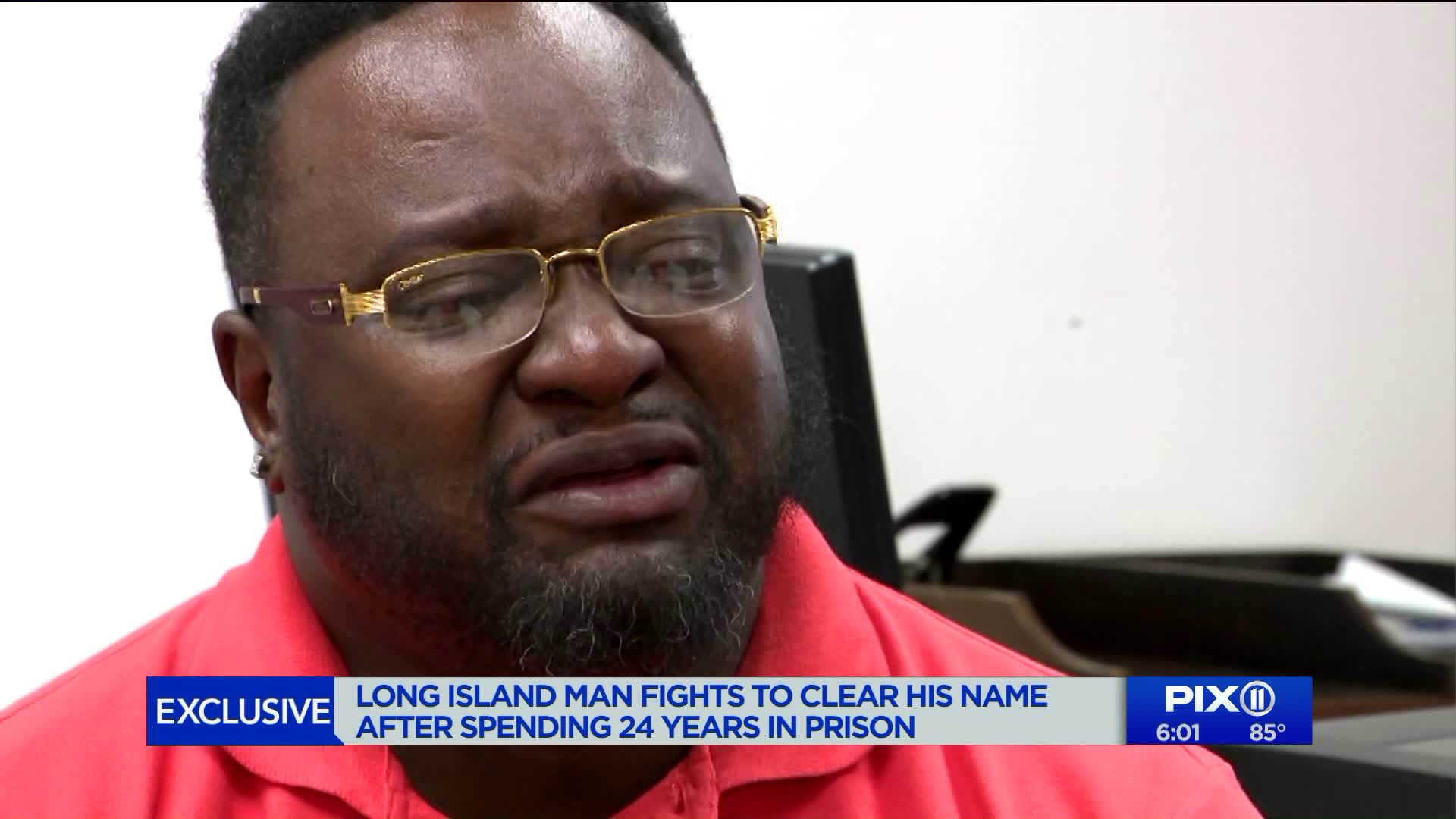 Daniel Felder spent 24 years behind bars, and is still on parole, for a murder on Long Island that he didn`t commit. Now, the real killer`s ex-girlfriend, who helped convict Felder, has come forward saying she lied all those years ago.

HEMPSTEAD, L.I. — A man was killed in 1993 and at least two suspects fled the scene of the murder in a car they didn't own. The man who'd lent that car to them, and who'd apparently been nowhere near the crime scene, was convicted of the murder nonetheless.

Daniel Felder served 24 years for the crime, which he insists he did not commit. Now, information that might very well clear his name is finally surfacing, after having been suppressed, allegedly, when the man was on trial more than a quarter century ago.

Felder, 46, is still on parole for the crime after being released from prison two-and-a-half years ago. When the murder took place in January of 1993, he was blindsided, he said.

"They told me, 'You're being arrested for a homicide,'" Felder told PIX11 News in an exclusive interview. "I was like, 'What homicide?'" he said.

The murder took place in a Crown Fried Chicken takeout restaurant, near the intersection of Henry and Greenwich Streets in Hempstead. Two men — Felder's uncle, Gerald Woodberry, and another man, Daryl Jordan — held up the restaurant at gunpoint. When Antonio Lopez, the man behind the counter, delayed opening the cash register, the men shot and killed him, investigators said.

The 1979 Chevy Malibu they'd fled in, Dan Felder had let them borrow for the night, when his uncle had asked him to use the car to visit his family. Felder says that it's clear that he wasn't at the scene of the crime.

"Now we have evidence that we should've had back then, to prove that I'm innocent," he told PIX11 News.

What he and his attorney have now, had existed back in 1993. However, they'd been restricted from it.

Barbara Stainbrook, a woman who'd been dating both Felder and his uncle, had been with Felder the night of the crime. She was an exotic dancer at the time.

Stainbrook now lives in Florida, and days ago gave a sworn, sealed and notarized statement to the private investigator for Felder's attorney. In it, she said that Felder "was with me" the night of the murder, miles away from it. Felder met her at the club where she worked in Queens that evening and then they spent the night together at her home, she said in the statement.

"If I had this, he would've never been convicted," Felder's attorney, Joe Falbo, said Monday. "That was more reasonable doubt than I'd been arguing throughout the whole trial."

However, he did not have that testimony. Falbo said that Stainbrook had told detectives and prosecutors that Felder had been with her that night, but they ensured that her testimony was not used at Felder's trial. In fact, Stainbrook was kept far away from the trial intentionally, Falbo told PIX11.

Instead, prosecutors had just one witness, the brother-in-law of Felder's uncle. He was already behind bars on a variety of unrelated charges, and had claimed, in exchange for a plea deal, that Felder was at the murder scene.

It was enough to convict Felder of murder. He was incarcerated for 24 years.

Despite that, he insisted on one thing during an interview Monday. "I forgive those people," he said, choking back tears. "I forgive them for doing that to me."

Felder's legal team did point out that even though prosecutors kept the alibi witness from them, they did let her testify against the two men who all witnesses say actually did the crime.

"She was credible for you," Jay Salpeter, the private investigator working on Felder's case, said about the district attorney's office, in an interview with PIX11. "She's going to be credible for Mr. Felder."

Salpeter said that he has the same confidence in Felder's conviction being vacated as Felder does. The ex-convict and his wife are expecting a baby in October and Felder said that he wants the child to have a father with a clean record.

"I have to believe justice will be served," Felder said. "I don't believe I came this far for it not to be."

His attorney filed a motion on Monday to begin the process of having Felder's conviction overturned.

In response, a spokesperson for the Nassau County District Attorney's Office issued this statement: "Our Conviction Integrity Unit reviews all allegations of wrongful convictions. We received the motion paperwork and will review it."