New Statue of Liberty Museum opens to the public 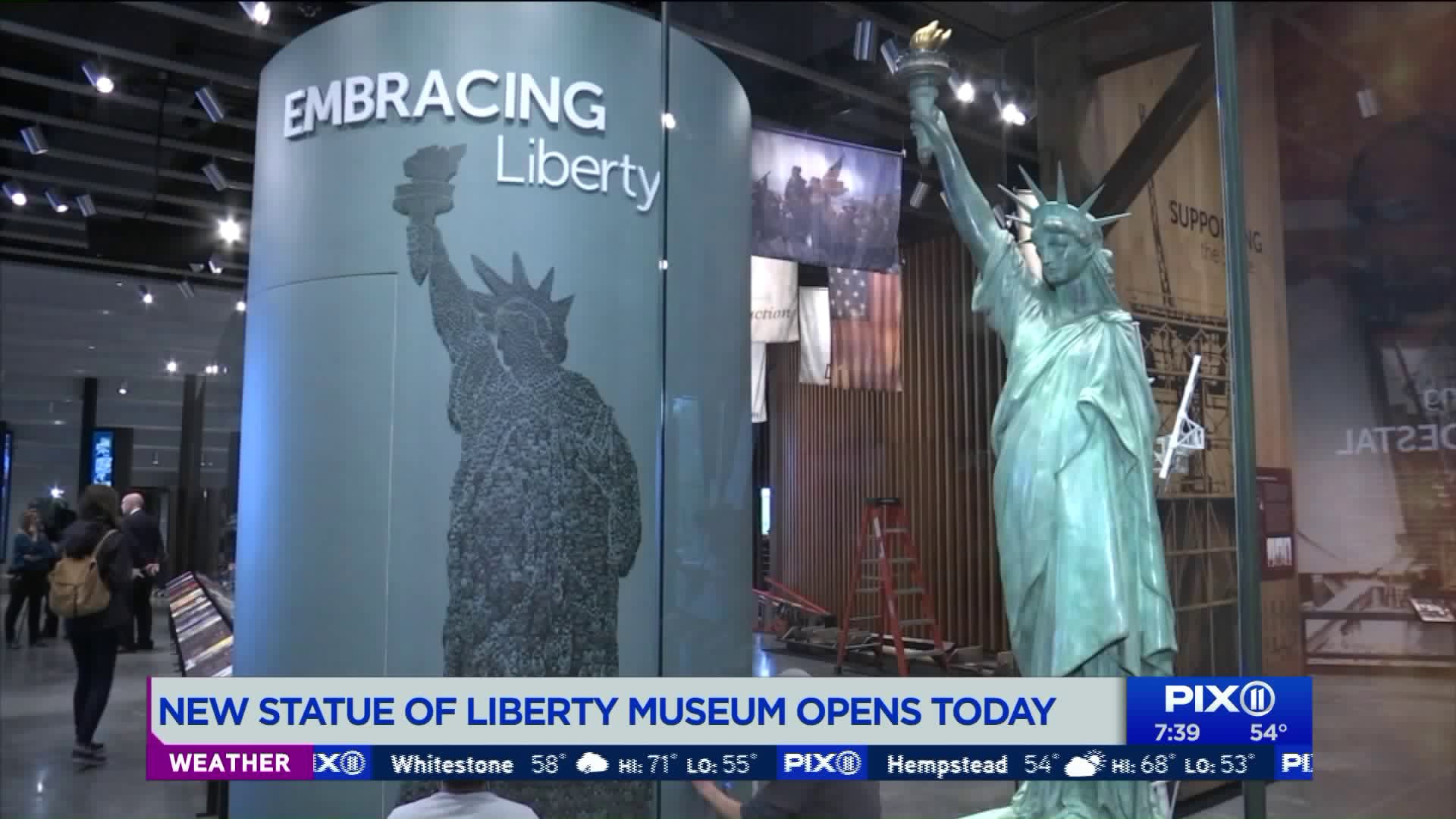 Since making her American debut in 1886, the Statue of Liberty has become one of the world's most famous attractions.

And, as of this week, she has something new to show off: The Statue of Liberty Museum opens to the public on Thursday, May 16.

Some five years in the making, the new museum -- which, like Liberty Island and neighboring Ellis Island, is managed by the National Park Service -- provides a multisensory experience for the millions of people who visit every year during trips to New York.

Now, visitors who aren't able to nab a ticket to the statue's crown -- or who feel a little more comfortable staying on solid ground -- will still have other options on the island for learning about history.

Visitors to the Statue board the ferry in Battery Park in lower Manhattan after going through security screening.

In the past, they would disembark on Liberty Island and head straight to the statue's pedestal for orientation, but now they will be able to go straight to the museum, alleviating some of the congestion in the pedestal.

About 4.3 million people visited the Statue of Liberty in 2018. Tickets -- which can combine Liberty Island and Ellis Island -- begin at $9 for children and $13.50 for adults, with ferry rides and park ranger-led tours included. To visit the crown, visitors should make reservations in advance.

Guests arriving at the new museum begin by walking through a three-part video chronicling the history of the Statue's creation before spilling out into a larger open space.

Starting with the end of the United States Civil War and the Emancipation Proclamation that formally ended slavery, the video details how those events inspired French artist Frédéric Auguste Bartholdi to create the Statue and finishes with what the Statue has come to signify both in the US and around the world.

From there, guests can visit a model of Bartholdi's Paris studio, see the Statue's original torch (which had been in storage since the 1980s), reach out and touch a copper model of the Statue's face and play with an interactive exhibit that asks visitors to take photos of themselves and share what liberty means to them in today's world.

Manhattan-based firm ESI Design took on the project of imagining the museum's interiors and exhibits.

"We tried to figure out an experience that was complementary, focused and relatively short -- because of the size of the crowds," Ed Schlossberg, president and principal designer of ESI, tells CNN Travel.

The museum reflects a changing New York City -- not just demographically but geographically.

"This building is way up because of the flooding from Hurricane Sandy," Schlossberg explains, referring to the superstorm that hit the city in 2012. "It's ten feet above the 500-year floodplain."

Following Sandy's devastation, city officials in New York worked to determine parts of the city that were at risk for future flood damage and created an open-source map for builders and residents. Their glossary defines the 500-year floodplain as "the area with a 0.2% chance of flooding in any given year."

For those unable to make the trip to New York, The Statue of Liberty-Ellis Island Foundation is launching a free iOS app that uses augmented reality to give people around the world a way to learn about and engage with Lady Liberty.

The app lets users see a time-lapse view from the Statue's eyes, take a peek inside the structure, access archived photos and see how its color changed over time.

But its flagship feature is the 3-D model of the Statue of Liberty, which was created by taking a series of high-resolution photos from a helicopter circling the landmark.

The app's three developers also used architectural drawings and referenced photos from the Library of Congress to match the patina, or the green film on its surface produced by oxidation over time, to the year.

The app's concept is the brainchild of foundation board member and fashion designer Diane von Furstenberg, a Belgian immigrant who is known as "Godmother" of the Statue of Liberty. She connected the foundation with Apple CEO Tim Cook.

"He had never been [to the Statue of Liberty], so he came to see it and he was overwhelmed," von Furstenberg told a group of reporters ahead of the app's launch.

"I said I'd love for people to go to the Statue of Liberty and have an Apple experience ... and [the Foundation] made an incredible app and podcast," she said. "The app is incredibly advanced technologically because they use AR."

The app's name is simply the Statue of Liberty app, while the podcast is called Raising the Torch.

Von Furstenberg hosts Raising the Torch, with episodes featuring different historians who discuss aspects of the Statue's past and place it in a historical context.

When it comes to the physical museum, however, accessibility is the name of the game.

The kiosks where visitors input their ideas about liberty were placed at an optimum level for wheelchair users, and there are wide turning radiuses throughout the space to make it easy for visitors with various levels of mobility to get around.

In addition, custom headsets with audio narration for videos and interactive exhibit components are available for blind visitors, and deaf and hard-of-hearing guests can use hand-held devices to watch an ASL tour as they explore the museum.

Judy Giuriceo is the curator of exhibits and media for Statue of Liberty National Monument and Ellis Island.

"This museum is going to be perhaps our most accessible yet," she tells CNN Travel. "We're going to have to bring the others up to this level."

Along with being the unofficial symbol of New York City, the Statue of Liberty is a UNESCO World Heritage site. Her full name is Liberty Enlightening the World.