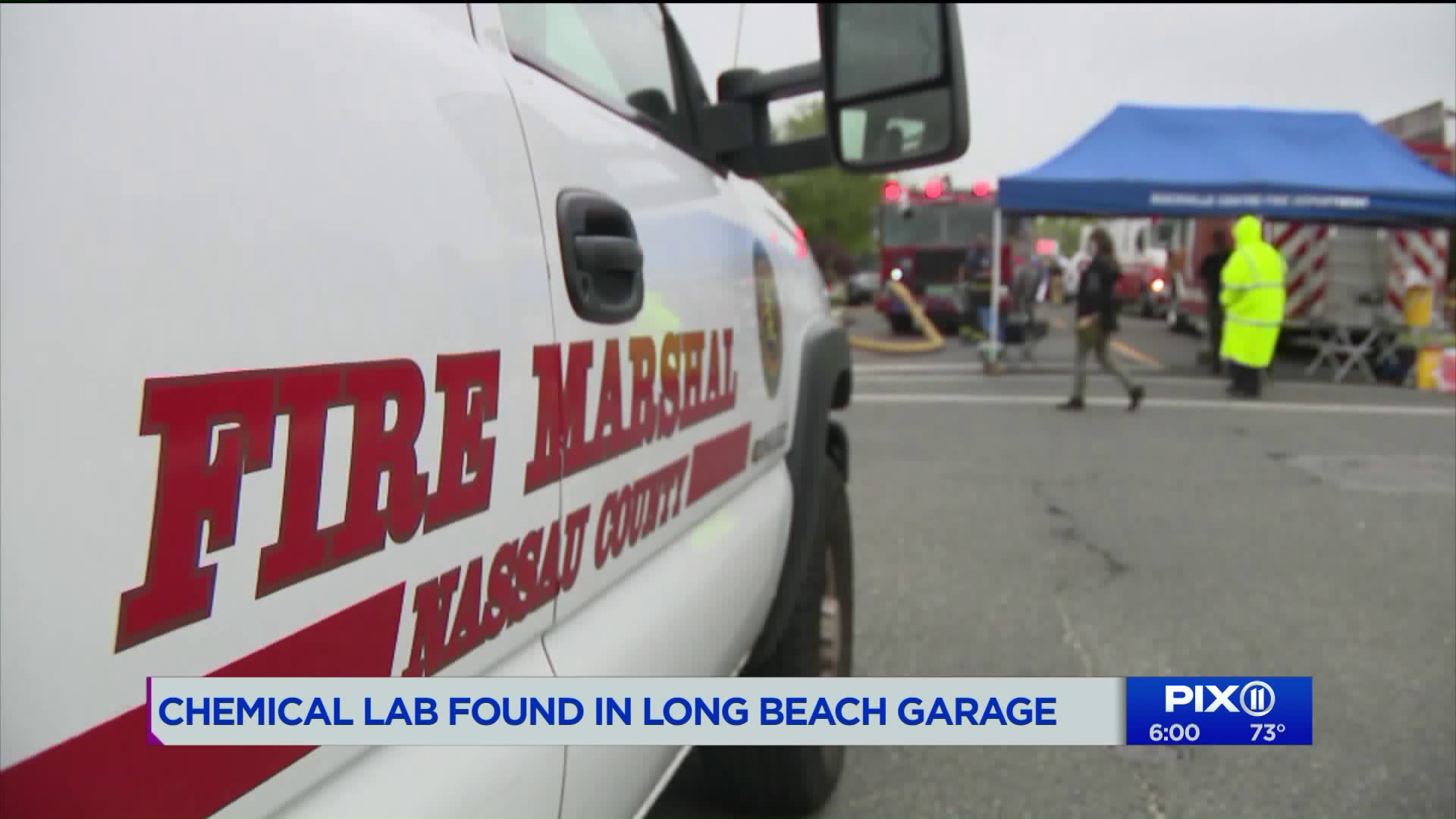 After a man was found unconscious on a lawn outside of an apparent chemical lab in a garage, federal and local law enforcement, along with fire investigators, are working a massive response scene on an otherwise quiet block in this seaside Long Island town.

LONG BEACH, L.I. — Federal, local and county agents remain on the scene of what they call a chemical lab, where, according to law enforcement sources, possible illegal drug manufacturing was underway.

It put a whole neighborhood at risk of explosion, and left one man in danger of losing his life, sources said.

Around 8 a.m. on Friday, police received a 911 call saying that a man was unconscious on the lawn of a home on West Beech Street, between Lafayette and Laurelton Boulevards. Medics and other first responders arrived, and they rushed the man to a nearby hospital in serious condition.

Responders quickly realized that in the detached garage of the home were liquid chemicals bubbling over a heat source, according to police. They evacuated parts of the block, and kept a distance until a full hazmat response could take place.

A bomb container unit was called in, in case of an explosion, as well as fire companies and special operations police units from a variety of nearby towns. Agents at the national level of law enforcement were also dispatched.

"I see the DEA here, and the FBI," said Peter Germano, a neighbor who lives less than half a block from the scene. "I guess that makes it a federal case."

At least half a dozen Drug Enforcement Administration agents were present at the scene, as well as many dozens of officers, firefighters, and EMTs from all over western Long Island.

"This is unusual for this to happen," said Glenn Jones, who also lives nearby, "because this is a safe neighborhood, it's a family orient[ed] neighborhood."

Other neighbors, however, say that Long Island is in the grips of a drug abuse epidemic. Law enforcement statistics bear that out.

Residents told PIX11 News that even though this is a quiet beach town with generally low crime, it's not immune to the intensifying drug problem, and that Friday's incident underscores that.

"It was like 'Breaking Bad,'" said Bryn Euster Smith, a nearby resident, referring to the television drama about an underworld of illegal drug manufacturing and selling.

"You don't think it's going to be in your nabe, kind of," Smith said, using a slang term for a neighborhood.

Other residents acknowledged that while the drug problem may exist in Long Beach, it shouldn't, they said.

The man who was transported from the scene of the alleged chemical lab has not yet been identified. Sources with knowledge of the investigation told PIX11 News that his prognosis is not good.

Still, they said, investigators are hoping that he'll recover. They want him to be able to provide details about what had happened at the home two blocks from an Atlantic Ocean beach, and why.