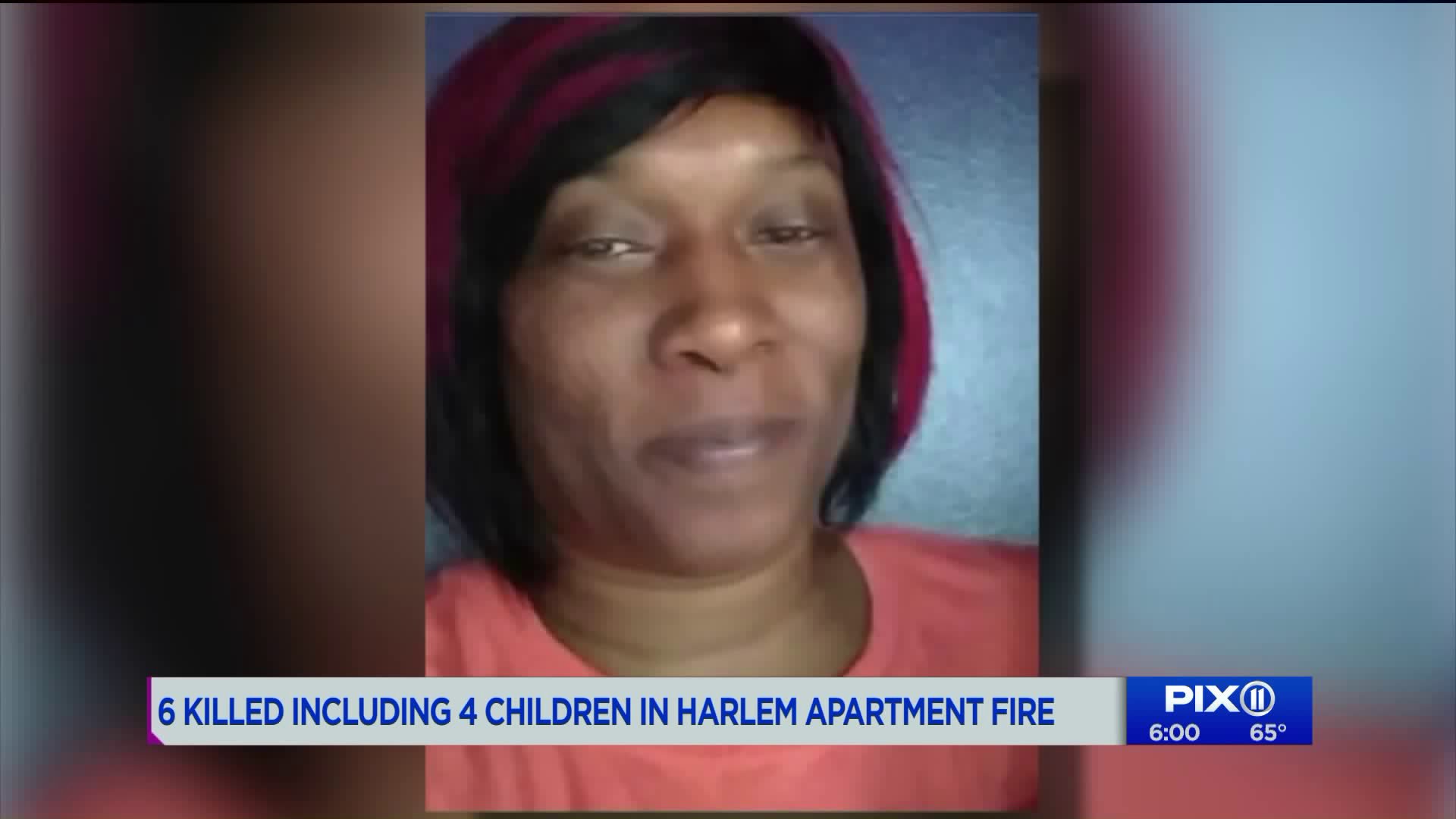 Andrea Pollidore, 45, her four children two girls, ages 11 and 6, and two boys, ages 8 and 3 and a 33-year-old man believed to be the woman`s stepson, were pronounced dead at the scene.

HARLEM, Manhattan — Six people, including four children, were killed "in a terrible accident" when a fire that began on a kitchen stove tore through a NYCHA apartment in Harlem early Wednesday.

"It's a very painful day for our city," Mayor Bill de Blasio said in a news conference Wednesday morning.

"As a father, hearing that four children were lost in a single family is extremely painful."

Six people, including four children are killed in a fire at a Harlem apartment.

Over 100 members of the FDNY responded to the fire within three minutes and were met at the door with flames—the apartment "fully involved," fire officials said. Flames shot out of the apartment's windows, and the fire blocked  the inhabitants from reaching the front door or the fire escape.

Andrea Pollidore, 45, was among the six people killed in a Harlem apartment fire. FDNY says Pollidore, her four kids and her stepson were killed in the overnight blaze. (PIC: Courtesy of family member)

The cause of the fire appears to have been a stove burner that was left turned on, fire officials said, adding that so far there is no indication the fire is suspicious.

The apartment was equipped in June 2017 with a combination smoke alarm and carbon monoxide detector, which was tested in January 2019, according to Kathryn Garcia, the interim chairwoman at the New York City Housing Authority.

People who knew the mother and her family said that she’ll be remembered for being kind hearted.

“Everyone loved her,” said a family friend who chose to only give her first name, Maxine. “She would say good morning, anything to make your day. Always doing something positive.”

Another woman, who did not give her name, said that Pollidore had opened up her home to her, days before the fire.

“My husband and I had a homeless situation, and Andrea took us in," the woman said. “It wouldn't matter, her home situation or whatever. Her heart is mad big.”

Geraldo Morales, a resident at the apartment building, told PIX11 he carried his dog out as his mother, who has bad health, was holding onto his back as they got out the apartment through the fire escape. "

"We're blessed. That could've been us," another resident said.

Residents told reporters smoke was seen throughout the hallways. A tenant, Patricia Flowers, said firefighters had to carry her and her mother down the building. "I was trapped inside, I couldn't get out," she said.

"They literally carried me and my mom down the stairways."

Nigro and Garcia reminded residents not to leave their stoves unattended.

The blaze is one of the deadliest fires in New York City in years. In 2017, 13 people, including a baby, were killed when a massive fire ripped through a Bronx apartment. The blaze was started by a small child playing with a stove.

The building where the fire took place was constructed in 1910 and renovated in 1994. It includes 62 units and houses 129 families, Garcia said.