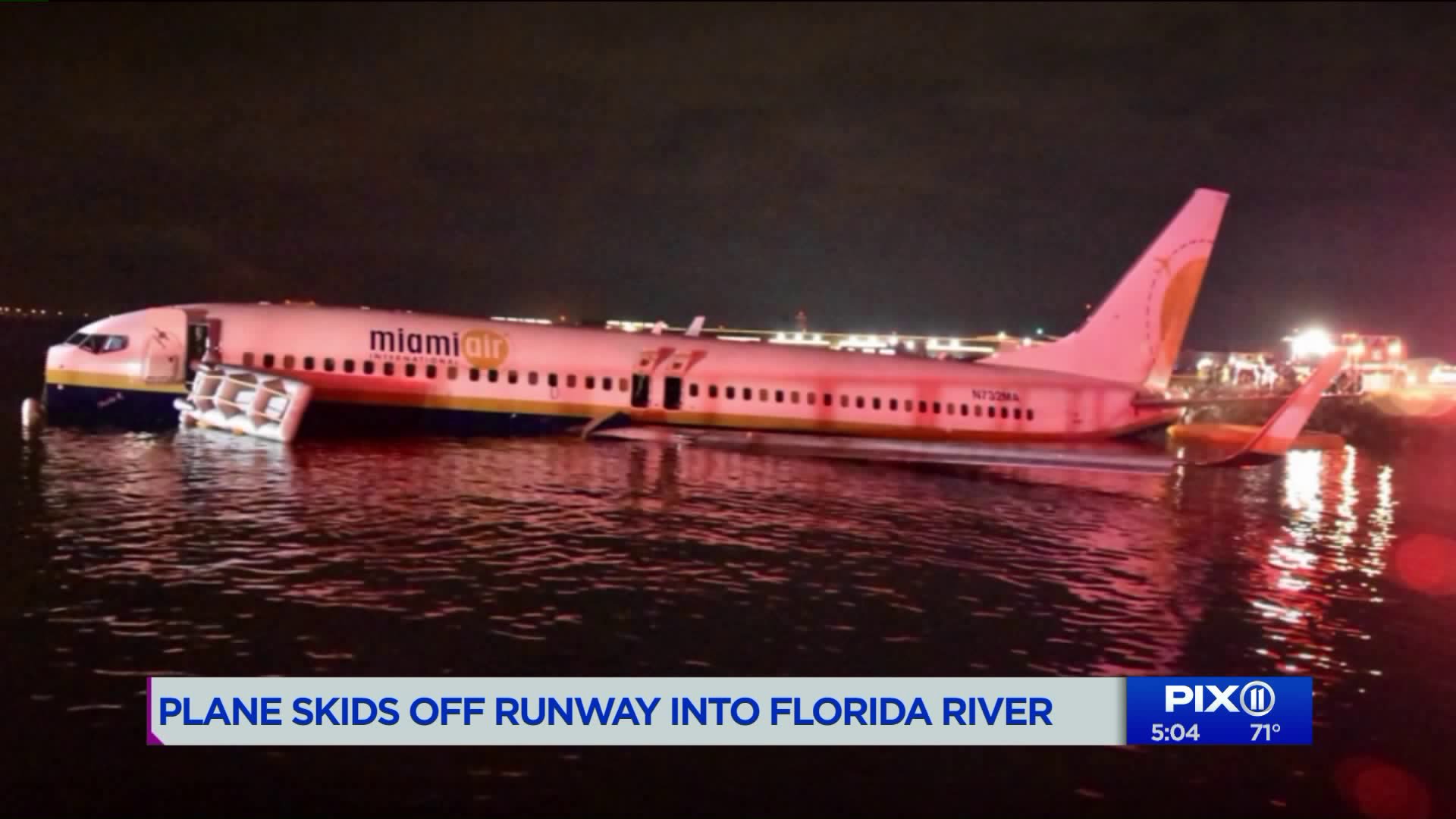 A military-chartered passenger plane slid off a runway and into a Florida river while landing Friday night, authoritiessaid, forcing scores of passengers onto the aircraft`s wings to await rescue. The Boeing 737, carrying 136 passengers and seven crew members from the Guantanamo Bay military station in Cuba to Naval Air Station Jacksonville, came to rest in a shallow part of the St. Johns River and was not submerged. All people aboard survived, and firefighters helped them to safety, officials said.

JACKSONVILLE, Fla. — A charter plane carrying 143 people and traveling from Cuba to north Florida ended up in a river at the end of a runway Friday night, though no critical injuries or deaths were reported, officials said.

The Jacksonville Sheriff's Office posted on Twitter that a marine unit responded to assist. The plane was in shallow water and not submerged. The agency said "every person is alive," and later tweeted that 21 adults were transported to local hospitals by Jacksonville Fire and Rescue. All are listed in good condition with no critical injuries.

The plane was carrying military personnel headed home, on vacation, or to get medical care. It included families, civilians, grandparents and children -- all connected to the military.

There were also pets checked in the luggage compartment below. A civilian defense attorney on board, Cheryl Bormann, said they have not been rescued, and they likely didn't make it. Fire rescue officials used a cable to pull an inflated raft with people to a nearby pier.

Naval Air Station Jacksonville said pets have not been rescued due to safety reasons. "Our hearts and prayers go out to those pet owners during this terrible incident," it said in a Facebook post.

#JSO Marine Unit was called to assist @NASJax_ in reference to a commercial airplane in shallow water. The plane was not submerged. Every person is alive and accounted for. pic.twitter.com/4n1Fyu5nTS

A photo posted by deputies shows a Miami Air International logo on the plane. The company didn't immediately respond to messages from The Associated Press.

Capt. Michael Connor, the commanding officer of NAS Jacksonville, said during a news conference that passengers were a mix of civilian and military personnel. Some were staying in the area, while others were set to fly on to other parts of the country.

While the crash certainly wasn't ideal, Connor acknowledged that it could have been much worse.

"I think it is a miracle," Connor said. "We could be talking about a different story this evening."

It wasn't known how long it would take to remove the plane from the river, but Connor said the landing gear appeared to be resting on the river bed, making it unlikely for the aircraft to float away. He said crews began working to contain any jet fuel leaks almost immediately after securing the passengers' safety.

Liz Torres told the Florida Times-Union that she heard what sounded like a gunshot Friday night from her home in Orange Park, about 5 miles (8 kilometers) south of NAS Jacksonville. She then drove down to a Target parking lot where police and firefighters were staging to find out more.

The Jacksonville Fire and Rescue Department posted on Twitter that approximately 90 personnel responded to the scene, adding that the department's special operations team had trained with marine units for a similar incident earlier Friday.

Navy security and emergency response personnel were on the scene and monitoring the situation, the Navy release said. Family members who were expecting the arrival of passengers were instructed to stand by.

Jacksonville Mayor, Lenny Curry, said fire and rescue crews were on the scene. "While they work please pray," he wrote.

2. This is a developing situation. I’ve been briefed that all lives have been accounted for.

4. All alive and accounted for. Our Fire and Rescue teams are family to all. @JFRDJAX @jaff122

The mayor also said that President Donald Trump called to offer help as the situation was developing.

Officials didn't immediately say what caused the plane to leave the runway.

6. @realDonaldTrump White House called to help as the situation was developing.

Officials did not immediately say what caused the plane to leave the runway. Boeing said in a tweet Friday night that it was investigating: "We are aware of an incident in Jacksonville, Fla., and are gathering information."

Connor said National Transportation Safety Board investigators were already on their way.