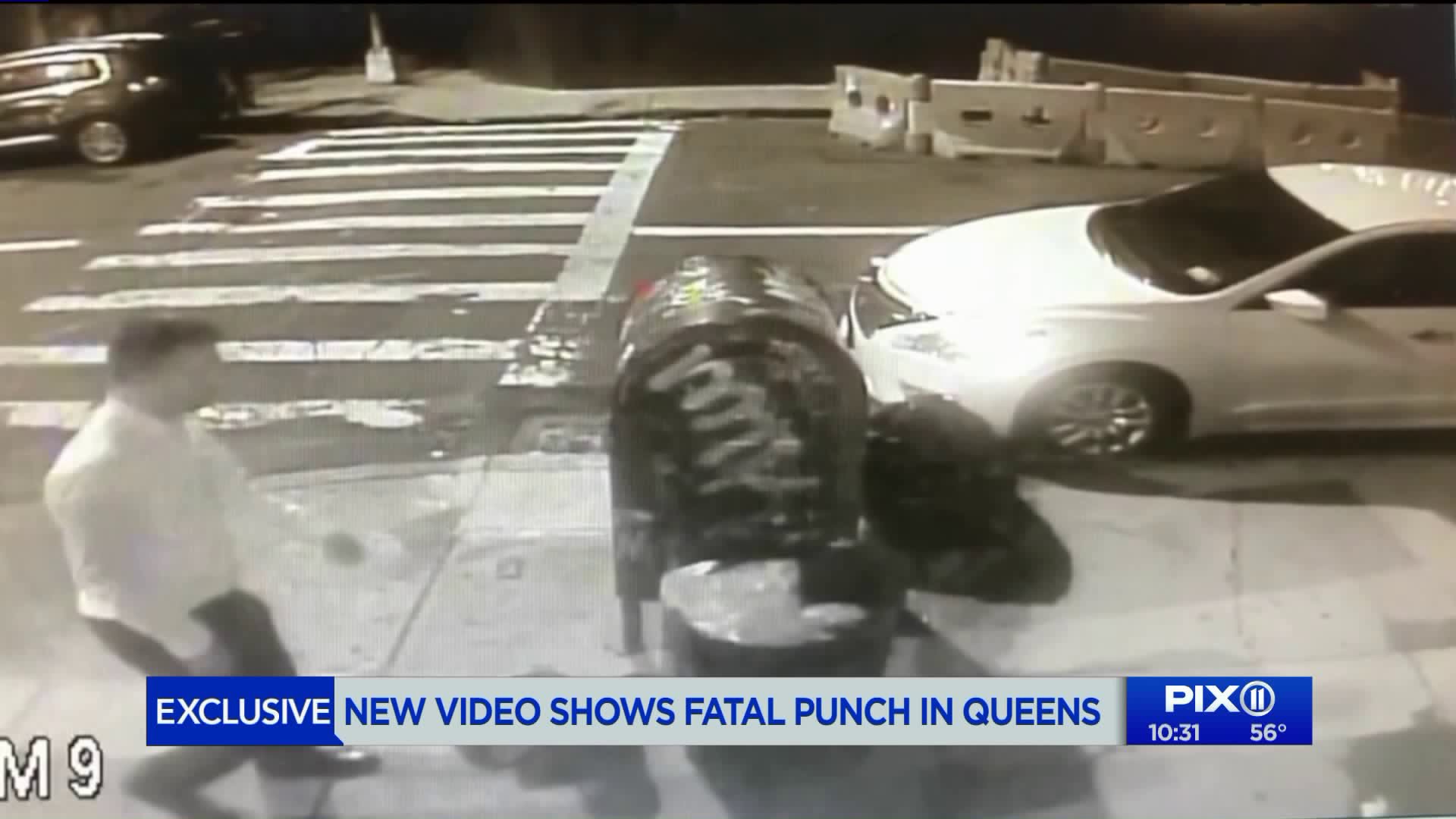 The mother of a young marketing executive killed last summer in Long Island City, after a fatal encounter with the assistant basketball coach at Wake Forest University, released surveillance footage of the incident Thursday, hoping to prove her son was never the aggressor.

NEW YORK — The mother of a young marketing executive killed last summer in Long Island City, after a fatal encounter with the assistant basketball coach at Wake Forest University, released surveillance footage of the incident Thursday, hoping to prove her son was never the aggressor.

She’s angry with the Queens District Attorney’s office for charging the former coach, Jamill Jones, with third degree misdemeanor assault — instead of a homicide.

“The Queens DA has done nothing to protect our family,” said Donna Kent, the mother of Sandor Szabo. “It seems like they’ve done everything to protect and defend Jones. Jones issued Sandor a death sentence.”

The newly-released surveillance — taken from outside a corner bakery on 29th Street in Long Island City — shows a frustrated Sandor Szabo rocking a mailbox.

Family lawyer Doug Curran said, “Obviously, he was inebriated. He was at a wedding reception. No one is disputing that.”

Szabo’s mother and the attorney told PIX11 the three camera angles on the video make it clear Szabo didn’t deserve what followed.

Szabo goes out on the street, and it looks like he’s trying to get the driver’s attention.

The family believes Szabo was trying to hail an Uber or Lyft ride.

A wider angle of the scene shows the white BMW, owned by Jamill Jones, brake on the street — and then back up, parking near the corner.

Szabo is seen approaching the vehicle, but the bright tail lights obscure what happens for about three seconds.

Then, Szabo is seen walking back toward the corner.

Seconds later, a man identified as Jamill Jones sprints from the car and confronts Szabo on the corner.

He is seen winding up to deliver a punch, which happens out of camera range.

Szabo had his hands up in defensive mode.

All that’s seen after that are Szabo’s legs, after he’s clearly fallen to the ground.

Jones then leaves the scene.

Szabo was declared brain dead, and six of his organs were harvested, before he was taken off life support at the age of 35.

The Medical Examiner ruled his death was a homicide, caused by blunt impact injuries.

Jones, who’s the same age as Szabo, turned himself in to New York City police four days after the fatal incident, on the same day Szabo was pronounced dead last August.

Jones produced a photograph of a broken-out back window on a white BMW, claiming Szabo had smashed his window.

“It’s incredibly difficult to break a rear window of a car with a bare hand,” Doug Curran said.

“His hands would have had some marks on them,” Szabo’s mother said. “They were pristine.”

Szabo’s mother and her attorneys had meetings with the Queens DA’s office months ago, pushing for more serious charges to be filed.

The family attorney said the lead prosecutors in the office cited a 1983 “one punch” homicide conviction that was overturned on appeal in another jurisdiction.

Doug Curran argued “one punch” homicide convictions have been secured in other parts of New York State.

In Australia, a “one punch” homicide conviction can carry a prison sentence of seven years.

“A single punch, that causes a death, can certainly be charged as criminally negligent homicide,” Curran said.

Curran said he never had any indication that the DA’s office checked other traffic cameras to see if Jamill Jones left the scene with a broken back window on his BMW.

“What we think is, ‘They got it wrong here, they made mistakes early on, and they’re now refusing to revisit them,’” Curran said.

PIX11 reached out to the Queens District Attorney’s office for comment Thursday afternoon, and they responded with the following statement:

"We have met with the family, listened to the family extensively on several occasions. We understand their grief and that they have lost a loved one. In prosecuting this matter, we have painstakingly reviewed both the evidence and the law. We recognize their deep frustration, but we must prosecute each and every case before us on the law. As important as the opinion of the family is we cannot make our prosecutorial decisions based solely on the wishes of the family - we must adhere to our oaths. We will continue to aggressively prosecute this matter through the framework of the New York State penal law."

There’s supposed to be a hearing in the Jones case this coming Monday.

In December, the lawyer, Christopher Renfroe, issued a statement to PIX11, saying “We have great empathy for the Szabo family. We have no comment on the legal process underway.”

Jones recently resigned from his position as assistant coach at Wake Forest University, after months of being on leave.