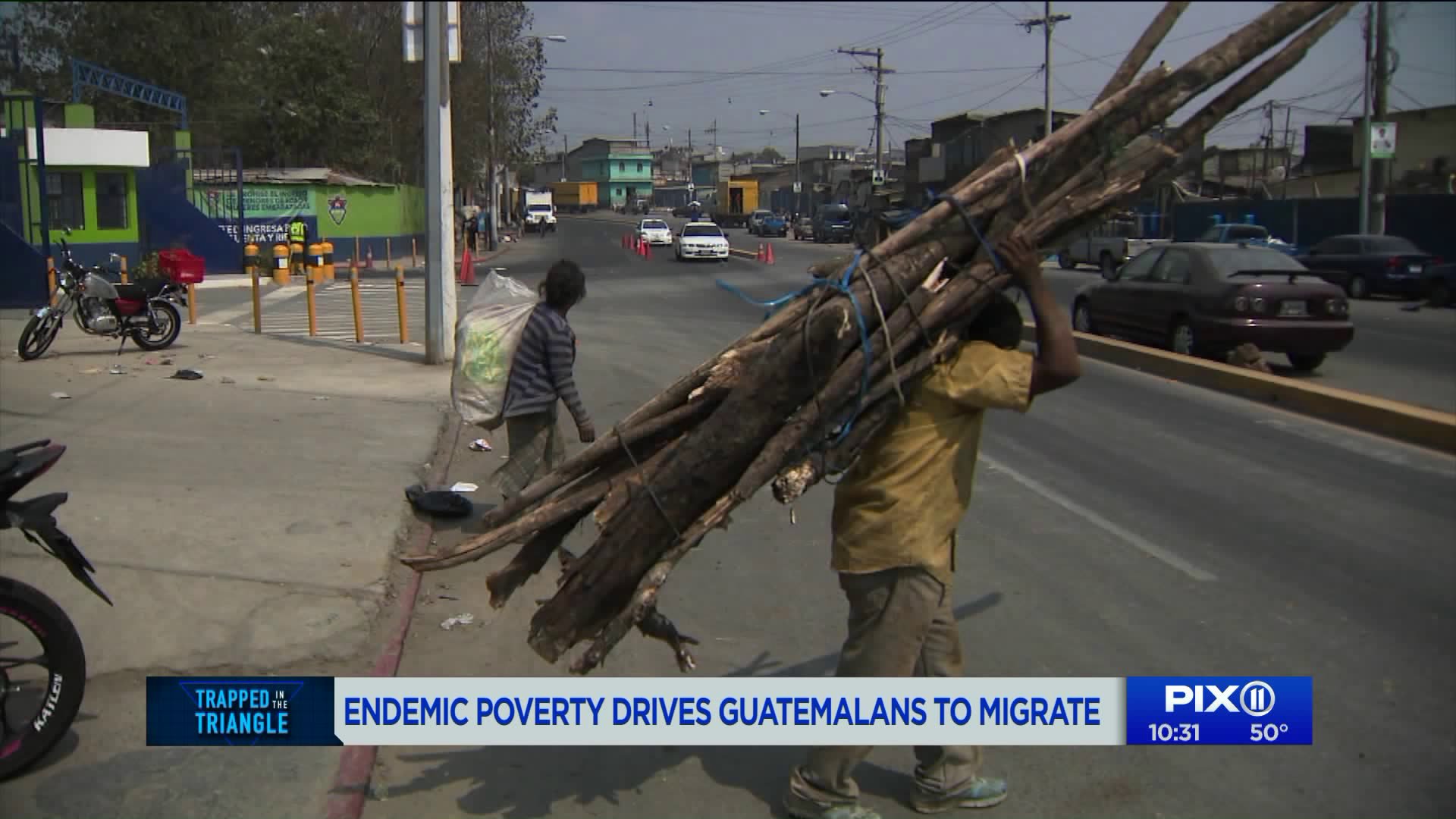 Nearly 60 percent of Guatemalans live below the poverty level, and 95 percent of residents don`t earn enough for their family`s basic needs, statistics from the Oversees Security Advisory Council shows.

GUATEMALA— Outside of one of the country's largest landfills in Guatemala, an entire community sits.

Residents go through piles of garbage and pick up anything of value, either to keep or sell.

"Hay bastante. There's a lot of them," one of the managers on duty tells PIX11 News.

Endemic poverty in Guatemala has been driving residents to join the migrant caravans on their way to the U.S. southern border.

Nearly 60 percent of Guatemalans live below the poverty level, and 95 percent of residents don't earn enough for their family's basic needs, statistics from the Oversees Security Advisory Council shows.

Guatemala is not as violent as its counterparts in the northern triangle. It borders Mexico, which makes it a strategic stop as migrants travel north.

At Casa Del Migrante, which is in the heart of Guatemala City, there is shelter, food and clothing for migrants who are in danger. The shelter also helps migrants file for asylum in certain cases where if they go home, they'll be killed.

The shelter is supposed to house a maximum of 40 people at a time. Sucely Donis, a psychologist at Casa Del Migrante, told PIX11 News that back in October, they transformed the shelter's gymnasium, normally used by missionaries who volunteer at the center, into a place to sleep for the migrant caravans, using gym mats on the floor for nearly 1,000 men, women and children making their way to the United States.

Donis detailed a few of the horrific stories she heard on a daily basis of why people leave their homeland.

“Una maleta. They bring just one bag," Donis said of  a family of five that recently showed up at the center looking for refuge, with seemingly their entire life packed into a single suitcase.

PIX11 visited the center along with a New York delegation on a fact-finding mission.

“People have a sense that people are migrating to the U.S. to take something from us. That is not the case at all," said Stuart Applebaum, president of Retail, Wholesale and Department Store Union. “They’re coming to this country because they have no choice at all.  Many feel that if they stay they are going to be killed. They feel they have no choice. I think we need to have a better understanding of why people are trying to come to the United States."

PIX11 met with one migrants living at the center.

The 50-year-old man had been deported from Los Angeles and tried to restart his life in his native country of El Salvador after living in the states for over 30 years.

The man, who asked to remain anonymous, filed a police report after gang members burglarized his new home in El Salvador.

That police report nearly cost the man his life.

"The police told me, 'you can get killed for calling us.' I said, 'well I gotta[SIC] do the report, they have my papers and everything and they can use it, you know, for a crime,'" the man told PIX11.

Fifteen minutes later, there was another knock on the door.

"A guy grabbed me from the shirt with a nine millimeter loaded gun. He put it on my head and said 'get on your knees. Why did you call the police?' I go, 'well they entered into my apartment.' They said, 'you know you cannot call them. Get on your knees!' I said 'they are going to kill me,' but they started beating me up," the man recounted.

"They thought they'd killed me because I passed out. They rolled me in a blanket and went to throw me in the garbage which is over a hill," he said.

The man fled in one of the migrant caravans, but only made it to Mexico, where he says he was, again, beaten and robbed by gang members.

He is applying for asylum in Guatemala, hoping to eventually make it back to his family in Los Angeles.

This man is just one of the hundreds of thousands of Central Americans, who, whether it's due to poverty, violence or even climate change, are looking to the U.S., just to stay alive.