Here’s how the college admission scandal impacted students with disabilities 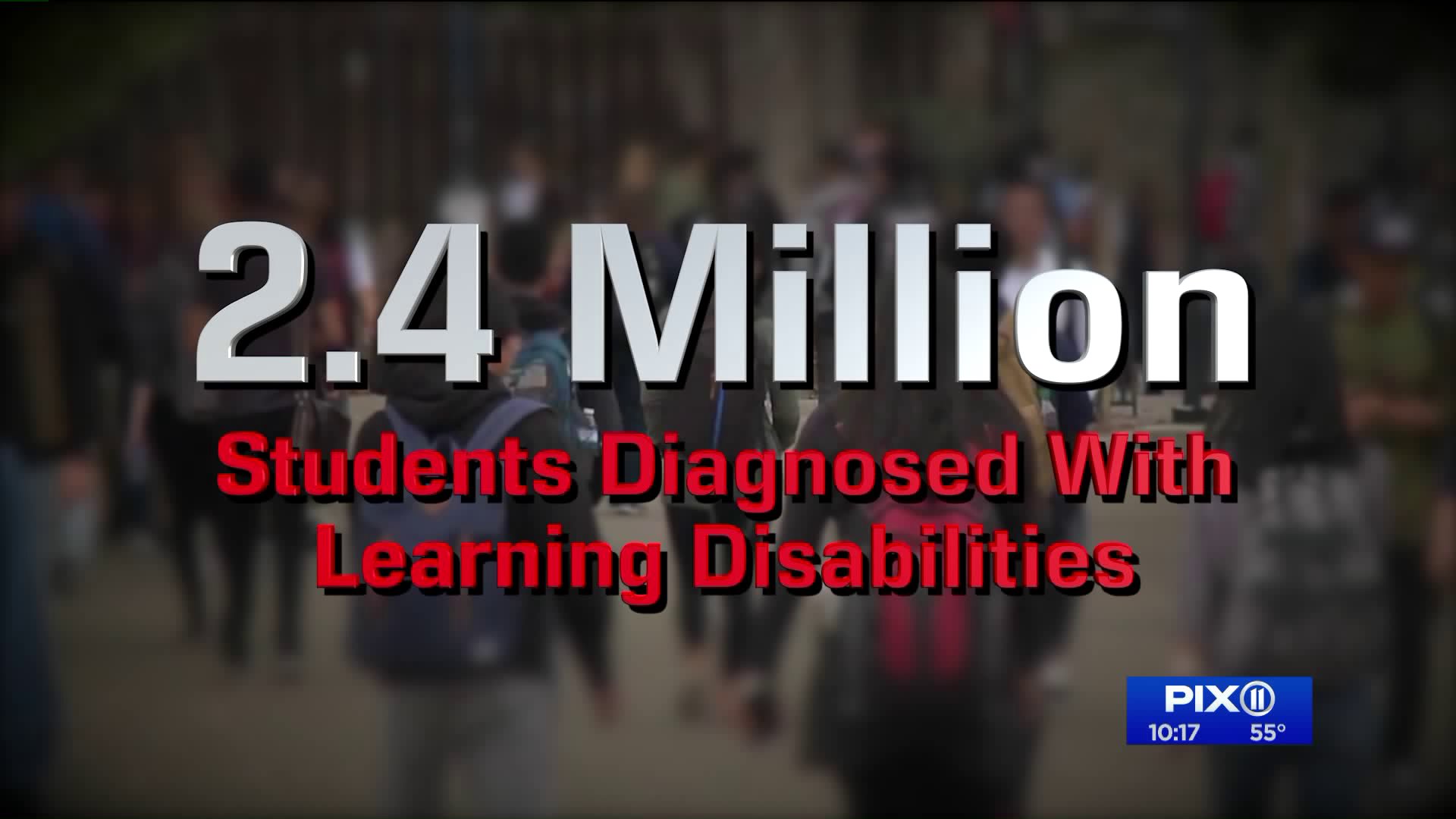 Prosecutors call it "a conspiracy nationwide in scope." Dozens of parents, sports coaches and college prep executives have been indicted for trying to get students into prestigious colleges. But the scandal has also impacted other students applying to colleges.

NEW YORK -- As the recent college admission scandal unraveled, many were shocked to learn some of the families allegedly sought to have their children diagnosed with a disability. This has students with disabilities and disability rights advocates angry and outraged.

Students with learning differences fear they will be the ones who suffer the backlash. PIX11 takes a closer look at why the widening scandal could spell trouble for millions of students with real disabilities.

With allegations that wealthy and influential families found ways to "beat the system" to get their children into the country's most elite colleges and universities, the scandal rocked the nation.

Part of the scheme - faking a disability - would open a so-called “side door” for the student to qualify for extended time to take the SAT or ACT. Being granted a disability accommodation may also allow a student to take the exam in a separate room with just the student and a proctor where the proctor would allegedly help them answer questions or even take the test for them.

So will the fallout from the college admission scandal affect the process for students with legitimate needs for disability accommodations?

"That is one of the big concerns," said Marcus Soutra. "That students who actually have learning disabilities will now have their applications looked at differently, that schools will kind of question whether they actually need these accommodations."

Soutra is president of Eye To Eye, an organization that provides programs and outreach to improve the lives of people with learning differences. About 2.4 million students in the United States have been identified or diagnosed with a learning disability. Soutra says the number is likely much higher, more like 1 in 5.

"These students got a place got a spot at a college that a student with a disability did not get with the real disability," Soutra said.

Actresses Lori Loughlin and Felicity Huffman have become the faces of the scandal. But PIX11 spoke with many students who are the ones truly affected; students with various disabilities from dyslexia to auditory processing disorders. They have had to fight for testing accommodations, accommodations afforded to them under a federal law.

According to the College Board, which administers the SAT, the number of students who take the SAT with accommodations vary from year to year, but the number is generally about 4 percent of the overall testing population.

"It was a very strenuous process I had to go back-and-forth to my neuropsych evaluator," said Chloe Barton, describing the difficulties of obtaining a testing accommodation.

Barton is a senior at the Mary McDowell Friends School in Brooklyn - a school that teaches students to be their own advocates. Barton took her college entrance exams last year and will start her freshman year at American University in Washington D.C. in the fall.

"There was a whole appeals process of finally I was able to get double time but it was difficult to get to that point," Barton said.

"I do think it’s going to be more challenging to be classified as you know having a disability and being able to receive accommodations,” said James Kagel, a classmate of Barton's at the McDowell School. "Being dyslexic and getting classified in certain categories it plays with you a little bit."

Zoe Brier also attends the McDowell School. She is a junior and will be taking the SAT this weekend.

"I was in first grade when I first got diagnosed with having a learning disability and had to move schools," she said. "When I get accommodations, it's really to help me step up because of my learning disability, it makes it a lot harder but it doesn’t mean I can’t get there with a little bit of help."

Soutra explained it's a misconception that extended time gives those students who receive it a leg up.

"If you don't know the answer to the question, longer time is not going to help but if you read really really slow, extended time is actually going to support that."

Disability advocates says it's a false narrative that testing accommodations give students with learning differences an extra advantage.

"The reality is students who are looking for disability accommodations on standardized tests have to submit extensive amount of documentation in order to qualify, the testing companies are in fact very careful and very rigid in what it is they accept."

We spoke to a Brooklyn mother who sought the help of Simon's practice. She asked that we hide her identity to protect her children's privacy. She has two children with learning disabilities and has had to navigate a complex system.

"Getting paperwork to get the extra time on the test was enormously difficult," she said. "The ripple effect of expenses every time you’re dealing with disabilities is extremely expensive."

She showed us just a small portion of the documents she has had to compile over the years to prove her children's learning disabilities. A mandatory part of an application is an evaluation of the student by a neuropsychologist every 3 to 4 years. It's often an out-of-pocket expense costing several thousand dollars each time.

Neuropsychologists say part of the problem is that learning disorders need to be seen as a condition that requires treatment. Determining a student has a difficulty is not just test based - it's interviewing the child and their parents, teachers, even babysitters, to get a whole picture of the individual.

Margolis, an asst. professor of Medical Psychology at Columbia, has spent years of her career specializing in this field. She is also co-founder of the Brooklyn Learning Center and the principal investigator of the Promise Project Reading Study that examines reading disorders.

Her team evaluates students. "We write a long report so its 30 hours for psychologist and at least 10 hours for child so it’s quite a bit of effort," Margolis said. "The process is really involved because we really need to understand a whole person. Assessment is not just a score."

Margolis also advocates for new epidemiological studies to be done. The last such study completed on students with learning disabilities was back in 1999. She wants parents to know they need to be paired with the right neuropsychologist for their child and to make sure that person has an understanding of your child. Under federal special education law, public schools also conduct testing that does not involved heavy out of pocket expenses, but as Margolis notes, it’s not as extensive or comprehensive as the assessment private clinicians like her do.

The Board also recently announced the results of its "Opportunity Scholarships" drawings for 2019. The scholarship program is for college costs. These scholarships were awarded by random draw to students who qualified by either building a college list with at least six colleges or practicing for the SAT using Official SAT Practice on Khan Academy for at least six hours. So far, the organization has awarded 750 students with a total of $600,000 in scholarships. The College Board is investing $25 million over five years to the program.

Experts stress it's only a small number who are being dishonest about learning disabilities. Nonetheless, they're dismayed to learn those involved in the scandal took advantage of a system to get the accommodations.

"I think we need to tackle this myth that these (admissions) tests are valid or important; they really shouldn’t be. Number two, we need to make it clear to people these disabilities are real," said Simon. "We’re using this very, very flawed instrument to make decisions of great importance and even those testing organizations advise schools to use more than just test scores."

"To know that other people are taking advantage of that makes me scared for other individuals with learning differences and learning disabilities because I don't want them to feel like not valid in their need for accommodation," said Catherine Maglione.

Maglione suffered a head injury after an accident in the 8th grade and has had to learn to live with her learning disabilities.

"Both of my parents really fought hard to get the accommodations that I did get for the ACT," Maglione said. "It was a lot of phone calls, it was a lot of doctors' notes. It takes me much longer to do my work and when I take my exams, I can't be around other people so I get a private room and it takes me longer to solve something and learn something and to memorize it, but once I have that extra time, and I've actually learned it, then I can do well."

"In college I’ve had to learn to advocate for myself," Maglione said.

Advocates fear the repercussions will make an already difficult process even more difficult and have consequences for those truly need them.

"We're basically asking them to takes these tests with one hand tied behind their back and that's wrong under the law," said Simon.