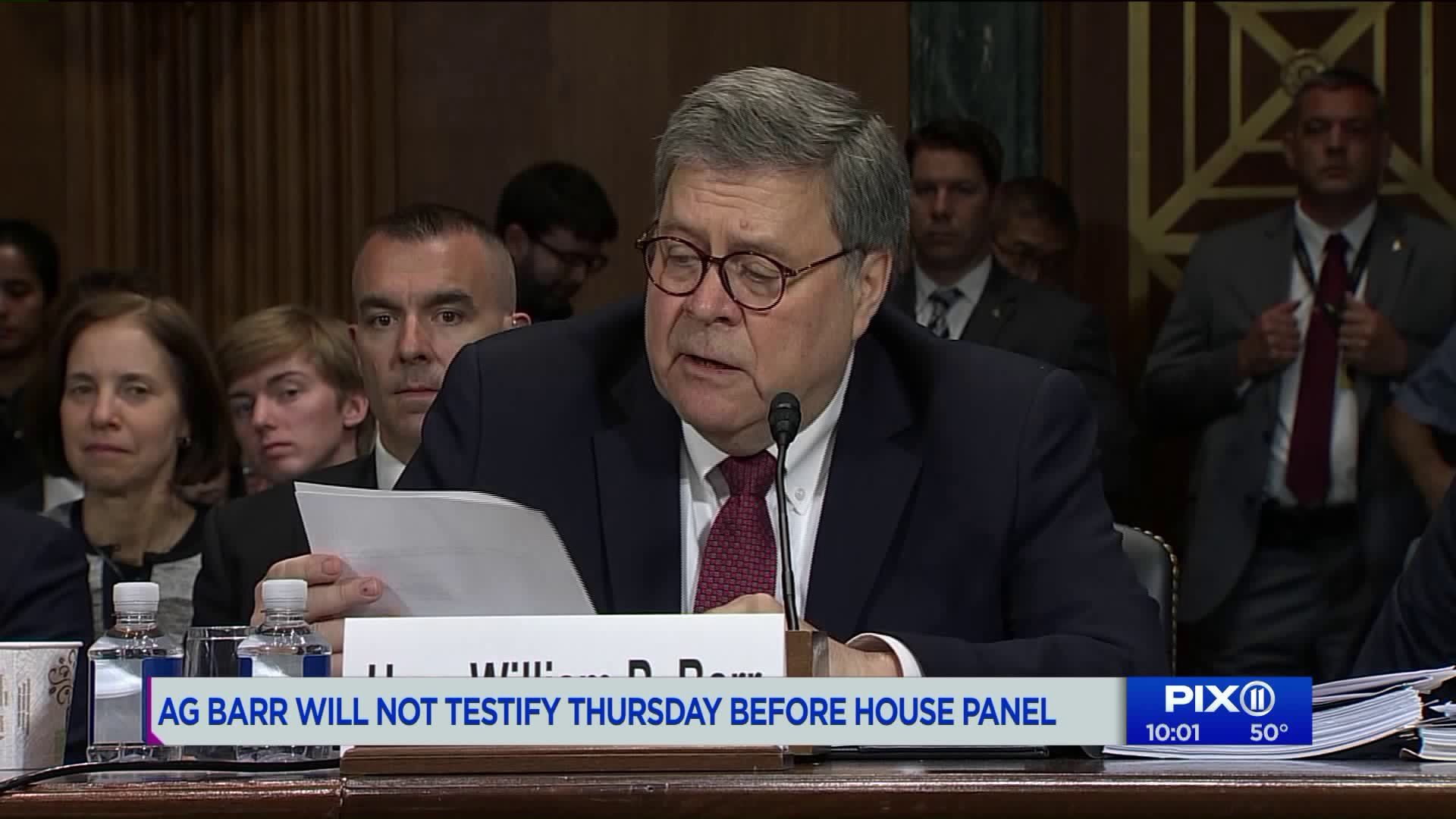 Assistant Attorney General Stephen Boyd sent a letter to Nadler on Wednesday outlining the reasons why Barr would not turn over the full report and underlying evidence.

"This subpoena is not legitimate oversight," Boyd wrote, calling the request "extraordinarily burdensome."

While the committee will still meet Thursday, without Barr -- creating the spectacle of a literal empty chair in the hearing room for the attorney general -- Nadler said the panel's primary focus is to obtain the full report and Mueller's underlying evidence, not Barr's testimony.

"Our first priority is to get the unredacted Mueller report," Nadler said.

In addition, the New York Democrat said the committee is working to nail down a date for Mueller to testify, saying May 15 was a target though it was not yet confirmed. Nadler said the Justice Department was not objecting to Mueller's appearance.

The fight between Barr and the Judiciary Committee comes after the attorney general testified before the Senate Judiciary Committee on Wednesday, where he was unapologetic in his handling of the Mueller report amid sharp criticism from Democrats and calls for his resignation.

Barr's decision to skip the House's hearing stems from committee Democrats' demand that he face questions from staff lawyers in a 30-minute block, in addition to the five-minute rounds of questions from lawmakers.

"He's trying to blackmail the committee," Nadler said Wednesday evening of Barr's unwillingness to appear. "The administration cannot dictate the terms of our hearing in our hearing room."

During an appearance on Fox Business, President Donald Trump reacted to news that Barr had declined to appear before the panel by criticizing committee Democrats, saying that members want to "treat him differently."

"They've never done it this way where they're bringing in outside counsel," he told Trish Regan via telephone, adding, "You elected people, they're supposed to be doing their own talking."

However, Republicans on the Senate Judiciary Committee brought in an outside attorney in September to question Christine Blasey Ford, who accused now-Supreme Court Justice Brett Kavanaugh of sexual assault, during the Trump nominee's confirmation process.

Justice Department spokesperson Kerri Kupec confirmed that Barr would not attend Thursday's hearing and said the department would continue working with the committee on oversight requests.

"Unfortunately, even after the Attorney General volunteered to testify, Chairman Nadler placed conditions on the House Judiciary Committee hearing that are unprecedented and unnecessary," Kupec said in a statement. "Congress and the Executive branch are co-equal branches of government, and each have a constitutional obligation to respect and accommodate one another's legitimate interests."

The top Republican on the House Judiciary Committee blamed Nadler for Barr's decision to skip the hearing.

"Chairman Nadler sabotaged his own hearing," Rep. Doug Collins of Georgia told reporters. "That's sad because now Democrats and Republicans are not going to be able to question Bill Barr, who was willing to come voluntarily."

Collins added that he had previously called for bringing in Mueller to testify and did not object to Nadler doing so now.

The committee had voted earlier Wednesday to allow staff to question Barr during his hearing on the special counsel's report on Russian interference in the 2016 election. The vote was 21-14.

Nadler and Collins are still expected to appear at Thursday's hearing, though it will be considerably shorter than initially anticipated. Nadler did not rule out issuing a subpoena for Barr's testimony down the road, but he was not expected to do so on Thursday.